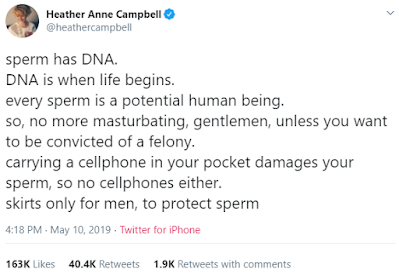 Through Secular Pro-life I frequently post content about how the human zygote is the first stage of a human being’s life cycle. Often when I point this fact out, people will suggest I’m strawmanning the pro-choice view. They assert that no one really denies the basic biology; the important issues to the abortion debate are personhood [i.e. yes the fetus is biologically human but is she philosophically a “person”?] and bodily rights.

But the longer I participate in the abortion debate, the more strongly I suspect that most people actually care more about the biology than the rest.

[For any readers who genuinely don’t already know: human sperm and human ova (eggs) are gametes (sex cells). They are not organisms. They are haploid cells (typically have 23 chromosomes each) created through a process called meiosis. A human organism is formed through fertilization; the sperm enters the egg to create a diploid cell (typically 46 chromosomes). This cell is called the zygote and it now multiplies through mitosis. Fertilization is a specific event that marks the transition from multiple gametes to a single organism and from meiosis to mitosis. These are basic biological facts. Read more here.]

To begin with, I’ve had so many debates with countless people who make 100% false assertions in defense of their pro-choice views. Here are some real examples of assertions people have made over the years:

I try to be careful not to give too much weight to comments from random people online. It’s a pet peeve of mine when “news” articles allege a new controversial view among a subset of Americans only for the author’s evidence to be screencaps of five otherwise ignored Tweets. You can find anything on the internet, so try not to over-extrapolate.

But the views I’m describing above are a lot easier to find than the 278th comment under a YouTube video. For example here’s a gamete/organisms equivocation that got over 40,000 retweets:

In addition to the countless and popular anecdotes, a recent dissertation out of the University of Chicago (which I’ve summarized in detail elsewhere) found that most Americans think “When does human life begin?” is (1) an important question (2) that people deserve to know the answer to so they can be informed about their reproductive decisions (3) that is best answered by biologists because (4) it’s an objective issue that can be informed by scientific knowledge. And of the Americans who chose biologists as the authority best suited to answer this question, 56% believed the biologists’ answer would strengthen the pro-choice side of the debate! (In fact the biologists affirmed that human life begins at fertilization.)

In other words, in the abortion debate, biology is important to most people, and yet a whole lot of them have no idea what the facts actually are.

This widespread ignorance bolsters the pro-choice side, and that’s why, I think, some abortion rights activists work so hard to obscure the biological reality. Last year multiple activists claimed (completely incorrectly) that embryos don’t have heartbeats. When states have passed laws requiring doctors to provide information on fetal development or offer the woman the option to view her ultrasound or hear the heartbeat, pro-choicers have described these regulations as restrictions on abortion. We’ve seen alleged experts muddle the lines between their political views and the scientific facts over and over and over.

If the general public already understood the basic biology and cared only about philosophical issues, abortion rights advocates wouldn’t need to do this song and dance. But people do care and don’t know about biology, and that’s why I’m going to keep repeating myself: the fetus is a human organism, and abortion kills humans.

We Asked, You Answered: Conversations with Pro-Choice Friends Scroll to top