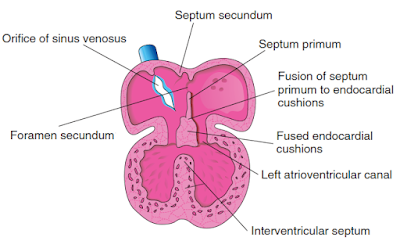 On Sept 3 (2021) NPR published the article “The Texas Abortion Ban Hinges On ‘Fetal Heartbeat.’ Doctors Call That Misleading” by Selena Simmons-Duffin. In NPR’s tweet of the article, the description said “What an ultrasound detects in an embryo at 6 weeks is electrical activity from cells – not a heart.” Here I will explain the incomplete and inaccurate ideas Simmons-Duffin’s uses to reach her incorrect conclusion. First, some important background information:

Embryos have hearts. Below is a diagram of the heart at 35 days postfertilization. (Note that pregnancies are typically dated from the first day of the last menstrual period (LMP), so 35 days (5 weeks) postfertilziation is 7 weeks LMP.) The heart has four chambers and uses coordinated muscle contractions to unidirectionally pump blood through the embryo’s veins in order to exchange oxygen and carbon dioxide throughout the body. These facts and the below diagram can be found in “The Developing Human: Clinically Oriented Embryology” by Keith Moore, TVN Persaud, and Mark Torchia, 10th Edition, Copyright 2016, which I quoted and screencapped extensively in my 2019 post about this issue.

The embryonic heart 35 days postfertilization. Part D of Figure 13-12 from “The Developing Human: Clinically Oriented Embryology”
You can find similar information here (“the formation of the 4-chambered heart by gestational week 7”), here (“The heart begins to pump fluid through blood vessels by day 20”), and here (“partitioning of the atria and ventricles…is complete by the end of the fifth week”). Myriad other sources on embryonic development will confirm the same.

Like many before it, NPR’s not-really-a-heartbeat piece rests on (1) interviewing doctors who work for abortion rights organizations (usually while glossing over their affiliations) and (2) euphemizing and obfuscating what the embryonic heart does.

Simmons-Duffin claims “fetal heartbeat” is misleading according to “physicians who specialize in reproductive health.” All OBGYNs specialize in reproductive health. Most OBGYNs don’t provide abortions or work for abortion rights organizations. It’s noteworthy, then, that not-really-a-heartbeat articles almost exclusively interview OBGYNs who work for abortion rights orgs. Simmons-Duffin’s article is no exception.

Simmons-Duffin quotes two doctors regarding whether there is an embryonic heart or heartbeat:

Meanwhile Simmons-Duffin’s article contradicts itself. In a passage distinguishing the terms “fetus” and “embryo,” the article contains the words “‘embryo’ is the scientific term” with a hyperlink to the Merck Manual passage “Development of the Embryo.” This passage specifically describes the embryonic heart, explaining (emphasis added):

Most organs begin to form about 3 weeks after fertilization, which equals 5 weeks of pregnancy (because doctors date pregnancy from the first day of the woman’s last menstrual period, which is typically 2 weeks before fertilization). At this time, the embryo elongates, first suggesting a human shape. Shortly thereafter, the area that will become the brain and spinal cord (neural tube) begins to develop. The heart and major blood vessels begin to develop earlier—by about day 16. The heart begins to pump fluid through blood vessels by day 20, and the first red blood cells appear the next day.

Simmons-Duffin wrote an article trying to claim at 6 weeks LMP there isn’t really an embryonic heart or heartbeat, and in that same article she linked to a source saying the embryonic heart begins to pump blood by day 21 (3 weeks post-fertilization/5 weeks LMP).

Downplaying the significance of embryonic heartbeats

For the most part, Simmons-Duffin’s article follows the same formula (and fallacies) as the rash of other not-really-a-heartbeat political pieces. However she does take it a step further than some, by adding a section about how detection of the heartbeat is not meaningful anyway. She quotes Dr. Kerns claiming “There is nothing specific and meaningful and relevant about the detection of cardiac activity at this gestation that implies anything that’s relevant for women’s health or for pregnancies.”

Dr. Kerns’ statement isn’t accurate. An embryonic heartbeat (with a fast enough heart rate) is a significant indicator of a viable pregnancy, and either the absence of a heartbeat or a heart rate that is too slow are significant indicators of an elevated risk of miscarriage. My OBs have explained that connection to me during my prenatal visits for my own children, and there are studies that explain the same:

Embryos have hearts and heartbeats. Embryonic heartbeat is a significant indicator of the viability of a pregnancy. And Simmons-Duffin may have discovered these facts if she interviewed doctors who weren’t also abortion rights activists.

Do human beings begin at fertilization?