If you’re into a lot of graphs and number crunching, read on. If you’re not, here’s the bottom line: compared to pro-life states, pro-choice states have more insurance coverage of contraception yet have roughly the same rates of unintended pregnancies and much higher rates of abortion.

In early 2015 the Washington Post published the article “States that are more opposed to abortion rights have fewer abortions — but not fewer unintended pregnancies.” Author Aaron Blake notes:

By contrast, Massachusetts is one of the most pro-abortion-rights states, with just 28 percent of people opposing the procedure. But it’s also on the low end as far as the percentage of unintended pregnancies (44 percent). Far fewer — 43 percent — of those pregnancies were brought to term.

In both his article’s title and text Blake seems to imply a correlation between anti-abortion attitude and higher proportions of unintended pregnancies. This implication seems plausible because Blake focuses on only two data points among all 50 (51 if you count the District of Columbia). In fact if you plot the two states Blake highlights–Mississippi and Massachusetts–you get this graph:

And yet the only time Blake addresses trends across the whole country, he admits:

In other words, the two groups hardly differ at all. Out of curiosity I dug up the numbers used to measure unintended pregnancy (from Guttmacher) and abortion opposition (from Pew Research Center). (I found slightly different data than the numbers Blake cites. I suspect we’re drawing from Pew Research data sets in different years.) Instead of comparing only the 10 most pro-life states to the 10 most pro-choice states, I looked at all 50 states (and DC). Here’s what it looks like when you don’t cherry pick:

So when you look at the whole data set (instead of only Mississippi compared to Massachusetts, or only the top 10 pro-life states compared to the top 10 pro-choice ones), there appears to be no relationship at all between views on abortion and unintended pregnancy.

And yet the above graphic suggests that pro-choice states have no lower unintended pregnancy rates than pro-life states. Why is that? A few possibilities jump to mind:

I decided to dig a bit more. I used the same Guttmacher and Pew Research data linked above for unintended pregnancy info and state attitudes about abortion. To measure state access to contraception I used data from the Kaiser Family Foundation, which outlines which states require coverage of prescription contraception, related outpatient services, and no cost contraception coverage. I also looked at data collected by the National Women’s Law Center regarding which states have contraceptive equity laws (i.e. laws that require insurance plans to cover a full range of contraceptives for women). I assigned each state a contraception score by giving 1 point for each law or coverage requirement, with a maximum of 4 points.

I then averaged the unintended pregnancy rates for states based on their contraception score and it looked like this: 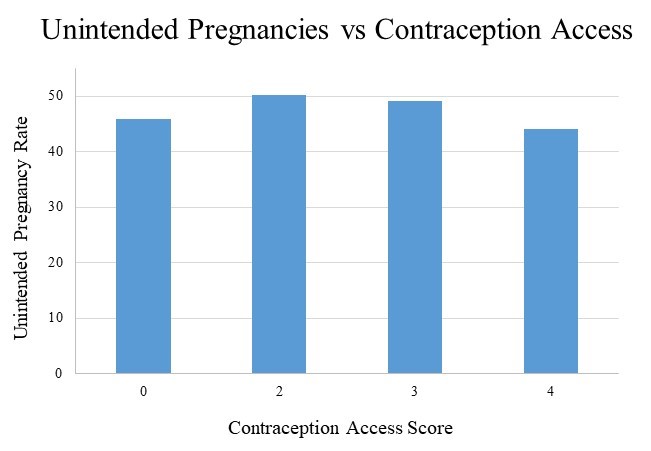 (There were no states with a score of 1. Every state that had contraception access requirements in place had two or more such requirements.)

States with no contraception access requirements have lower abortion rates.

Since I already had the data handy, I also compared state contraception access requirements to abortion rates: 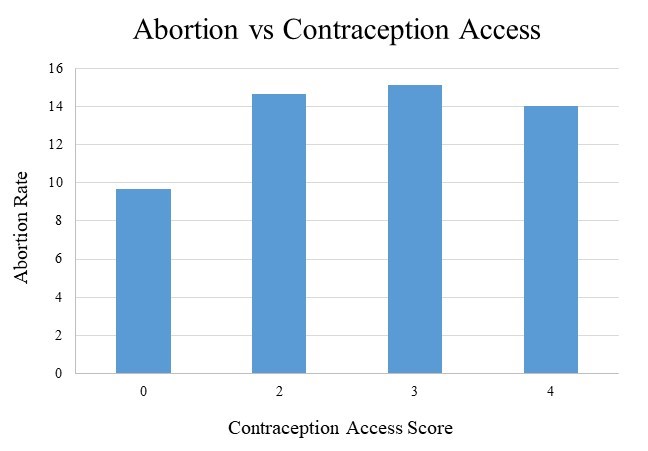 This result could imply that contraception access actually increases abortion rates, and many pro-lifers try to make that claim. Their theory is that whenever you have a desirable but risky action (sex), the more you lower the risk, the more often people will take that action. If people think the risk is lowered more than is actually the case (e.g. if the contraception they’re using or the way they’re using it isn’t as effective as they think), then they may be actually increasing their risk exposure by taking a risky action more often without proportionally decreasing the risk in each instance. This theory is plausible because states with more contraception access requirements do not have lower unintended pregnancy rates. Perhaps these populations lower the risk of a given instance of sex by using contraception, but increase their overall risk exposure by having sex more often without using contraception consistently or correctly. 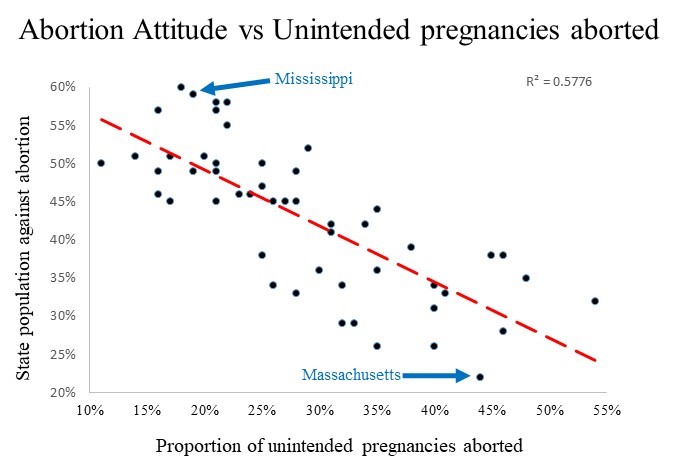 States with more legal restrictions garnered more points with a maximum possible 12 points. Unsurprisingly, there was an inverse correlation between the number of abortion restrictions and the proportion of unintended pregnancies aborted. 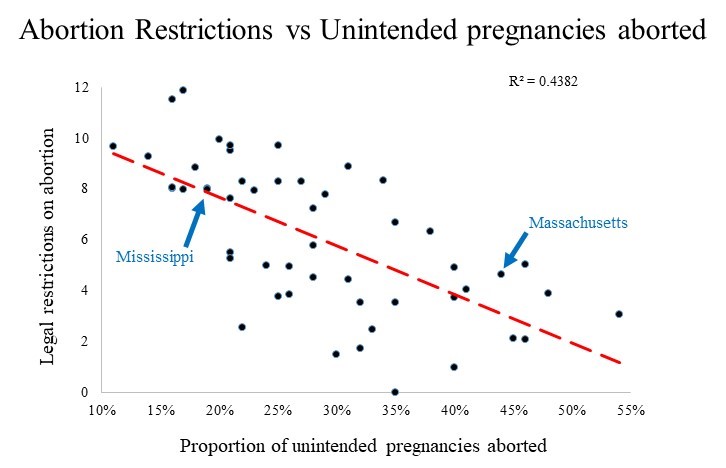 Contraception is not a panacea for abortion.

Secular Pro-Life supports contraception as non-violent healthcare for women, but it is only one tool in the abortion prevention toolbox. It is not a substitute for laws that recognize the rights of human beings in the womb.

Recap: Let There Be Life Conference 2018 at UC Berkeley
Scroll to top