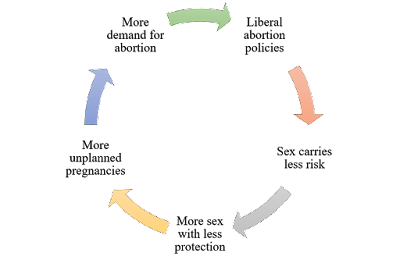 [Update December 2021 – We have recreated and added to the below list here: https://secularprolife.org/pregnancy-rates/]

Pro-life laws decrease abortion in two ways. The direct and more obvious way is by decreasing the number of pregnant women who get abortions. A wide body of research (part 1, part 2) demonstrates that when abortion is restricted abortion rates go down and birth rates go up.

But pro-life laws also decrease abortion in an indirect way: by decreasing unintended pregnancies. The idea is that people perceive abortion as an insurance policy. As Donahue & Levitt explain:

If people know that in the event of unplanned pregnancy they can always get abortions, they’re more likely to engage in risky sex.

There’s quite a lot of research to suggest this is true. Liberalized abortion policy has been associated with increased STD rates, decreased use of effective contraception, and the aforementioned increase in unintended pregnancies. Below, in chronological order, are studies that found these and other similar results.

“An analysis of 12 years of state-level data indicate that restrictions are associated with a reduction in abortions and either no change or a reduction in births, implying fewer pregnancies.” The Effect of Medicaid Abortion Funding Restrictions on Abortions, Pregnancies, and Births, Journal of Health Economics, October 1996

“In particular, the results suggest that residents in counties with longer travel distances to the nearest abortion provider have lower abortion rates and lower pregnancy rates.” The impact of provider availability on abortion demand, Contemporary Economic Policy, April 1996

“We find that countries which changed from very restrictive to liberal abortion laws experienced a large reduction in births, highlighting the insurance value. Changes from modest restrictions to abortion available upon request, however, led to no such change in births despite large increases in abortions, indicating that pregnancies rose as well.” Abortion as Insurance, National Bureau of Economic Research, February 2002

“We find that gonorrhea and syphilis incidences are significantly and positively correlated with abortion legalization. Further, we find a divergence in STD rates among early legalizing states and late legalizing states starting in 1970 and a subsequent convergence after the Roe v. Wade decision, indicating that the relation between STDs and abortion is causal.” The effect of abortion legalization on sexual behavior: evidence from sexually transmitted diseases. The Journal of Legal Studies, June 2003

“Parental involvement laws resulted in fewer abortions for minors resulting from fewer pregnancies; there is no statistically significant impact on births. The reduction in pregnancy seems to be attributable to increased use of contraception rather than a reduction in sexual activity.” Parental involvement laws and fertility behavior. Journal of Health Economics, September 2003

“Legalization itself is found to reduce the number of unwanted births. Beyond that, imposing moderate abortion restrictions do not appear to significantly increase unwanted births; abortions and pregnancies decline instead.” Abortion Policy and the Economics of Fertility, Society, May 2004

“First, the availability of abortion providers has the expected effect of reducing the supply of infants relinquished, particularly relative to the demand for abortion. Second, abortion law has an unexpected negative effect. This suggests that as abortion laws become more restrictive the total number of unwanted births may decrease.” The supply of infants relinquished for adoption: Did access to abortion make a difference? Economic Inquiry, July 2007

“Taken together the empirical results are consistent with the hypothesis that women’s sexual behavior is influenced by the direct and indirect cost of obtaining an abortion.” Abortion costs, sexual behavior, and pregnancy rates, The Social Science Jounral, March 2008

“We find restrictions on abortion availability (through abortion legislation mandating parental consent or notification) induce women to utilize birth control to avoid unwanted pregnancies, while pro-choice sentiments in the legislature may have the opposite effect.” Variation in Pill Use: Do Abortion Laws Matter? International Journal of Business and Social Science, September 2011

“A state’s antiabortion attitudes, which likely contribute to the enactment of restrictive abortion laws in a state, are a major factor in inducing greater use of highly effective contraceptive methods by adult women at-risk of an unintended pregnancy.” Restrictive abortion laws, antiabortion attitudes and women’s contraceptive use, Social Science Research, January 2012

“While county‐level access to emergency contraception was unrelated to trends in sexually transmitted diseases (STDs) and abortions before access changed, access afterwards led to a statistically significant increase in STD rates (gonorrhea rates), both overall and for females. We do not find, however, an impact of pharmacy access on abortion or birth rates.” The effects of increased access to emergency contraception on sexually transmitted disease and abortion rates, Economic Inquiry, December 2012 (Note: This study was not examining abortion policy as related to pregnancy. It is a similar study examining how the availability of emergency conctraception was associated with increases in STDs. Like with abortion, emergency contraception may decrease the perceived risk of sex and so increase the instances of less protected sex.)


“Fewer abortion providers increase the likelihood of women using the pill.” Utilization of oral contraception: The impact of direct and indirect restrictions on access to abortion, The Social Science Journal, March 2014

“We find that providing individuals with over‐the‐counter access to EBC leads to increase STD rates and has no effect on abortion rates.” Access to Emergency Contraception and its Impact on Fertility and Sexual Behavior, Health Economics, February 2015 (Note: Like the Economic Inquiry study above, this study is not examining abortion policy and pregnancy, but it demonstrates a similar phenomenon wherein people make riskier sexual decisions when they have an ‘insurance’ policy available such as emergency contraception.),

“Our findings reveal that restrictions on abortion funding have a significant and positive impact on a woman’s decision to use the pill.” The Role of Restrictive Abortion Legislation in Explaining Variation in Oral Contraceptive Use, Clinics in Mother and Child Health, October 2015

“Similarly, women in states characterized by high abortion hostility (i.e., states with four or more types of restrictive policies in place) were more likely to use highly effective [contraceptive] methods than were women in states with less hostility.” State Abortion Context and U.S. Women’s Contraceptive Choices, 1995–2010, Perspectives on Sexual and Reproductive Health, June 2015

“We find evidence to suggest that [Parental Involvement] laws are associated with an increase in the probability that sexually active minor teen females use birth control.” The effect of parental involvement laws on teen birth control use. Journal of Health Economics, January 2016

Further reading: This article from The Cut illustrates the thought process that can connect unplanned pregnancy rates and abortion availability. In this case, the woman is clearly educated about reproduction and she has knowledge of and access to contraception, but she is not as careful as she may otherwise have been partly because she knows she can get an abortion if need be.

I knew that the time I was sloppy with protection right before ovulation would put me at risk for getting pregnant. I’m the kind of woman who learns about fertility for fun, who genuinely enjoys reading about cervical fluid, egg freezing, and progesterone spikes. Which is why I knew I should have taken Plan B after that slipup and was hard on myself when I didn’t. But I also knew that if an unplanned pregnancy did occur, I’d have options in New York City.

Ask your mom: “Were you on Medicaid when you were pregnant with me?”

The ACA, Abortion, and the Election