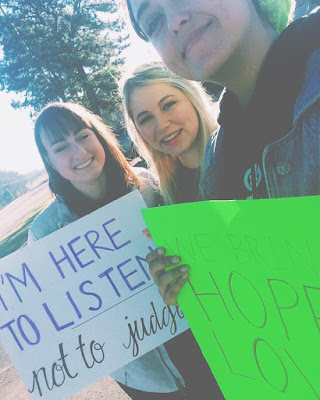 How did you get started sidewalk counseling? What draws you to the sidewalk compared to other types of pro-life work?

I got started with sidewalk advocacy when I joined my pro-life student group in college: Bama Students for Life! I had learned that the abortion facility less than a mile from our campus was the busiest facility in Alabama; that fact was a big catalyst in my pro-life advocacy. At the time, the facility performed nearly 70 abortions a week. So many were being killed, and I felt I could no longer stay silent.

What does your work entail? Describe an average day of sidewalk counseling.

On Saturday mornings I go to the closest abortion facility. I’ve coordinated with some friends from my church who also go, and there’s usually a handful of other local pro-lifers present, so on a regular Saturday there’s about 8–10 people out there. Because there are so many of us, we’ve gotten in the habit of splitting the group up across the sidewalk: groups of two or three will stand on either side of the entrance to the small parking lot to do outreach, and four or five people will stand a little further away to pray. Those doing outreach try to approach the people in their cars as they drive in or out. We also call out to people walking from their cars to the building, saying things like, “I can’t pretend to know what you’re going through right now, but I’d like to hear your story, and I want to know if there’s any way I can help. I’ve got information about free local resources that I would love to share with you.”

What are the most difficult aspects of this work, and how do you handle those?

For me, the most difficult thing is knowing what to say. I stumble over my words all the time, and talking to strangers makes me extremely nervous. I deal with that by trying to imagine what I would want to hear if I was the woman walking into the facility. I practice saying things to myself in the car on the way over. Obviously each person is unique, so I don’t want to sound scripted, but practicing certain phrases helps me feel more comfortable.

Do you hand out literature? If so, what is it about?

Yes! Lately I’ve been using the “This is not your only choice” pamphlet from Human Life Alliance. I also have several handwritten cards that I use if someone seems like they’re going to change their mind and leave; the cards list the closest local resources and include my personal phone number so they can reach out if they want to.

Do you refer people to local services? If so, what types or services? Provided by whom?

Yes — On the cards I give out I’ve list a couple different pro-life pregnancy care centers and a place that can help with housing. I also have the contact info for those places saved in my phone, along with information about what services they provide and whether they have any Spanish-speaking employees.

Do you have religious beliefs? If so, how do those influence your work? How do you handle religious differences between you and the people you meet?


I do! I’m Catholic and my faith influences my work in that I make a point to pray before, during, and after sidewalk advocacy. That said, I agree with the information in Sidewalk Advocates For Life’s training guide, which suggests the following topic progression: first, address the mother and her crisis; second, talk about her baby; and last, you could ask about her faith background (if she has one). Rehumanize International also talks about this progression under “Dialogue Tips” in our handouts here. Most women, in my experience at least, are in crisis mode. They want to know first and foremost that you genuinely care about them and you want to help them through this crisis.

How do you respond to people who say they are at the clinic for reasons other than abortion?

I get this rarely; the vast majority of people coming into the facility I go to are there for abortion. However, I typically respond explaining there are so many other organizations that provide birth control that don’t kill human beings.

What are some of the most common circumstances women describe that brought them to the clinic?

That they’re scared because the pregnancy was unexpected, or that they don’t have the finances to take care of the child.

Do you have ongoing relationships with any of the women you have met at the sidewalk? If so, what are those like?

I don’t have ongoing relationships directly, but one of the friends from church who goes with me usually stays in contact with them.

Do you interact with clinic staff? If so, what has that been like?

I see them pretty rarely, and when I do, I struggle to know what to say beyond, “You don’t have to work here.”

Many people believe that sidewalk counselors primarily try to shame and intimidate women. How do you respond to that idea?

I’ve witnessed my fair share of bad sidewalk advocates — so I won’t deny that they exist — but in my experience, the good greatly outnumber the bad. When I was in college, our student group made a point to try to convince other local advocates to use more loving and helpful signs. It didn’t always work. There was one man who’d carry a large sign with a swastika comparing abortion to the holocaust, and he refused to get rid of it because he had painted it himself. In those instances we distance ourselves as much as possible and carry signs like “Here to listen, not to judge.”

What do you think of buffer zone laws? Has your work been impacted by such laws?

It’s my understanding that buffer zone laws were created in response to some extreme measures taken by pro-lifers (like chaining themselves to the doors of facilities to keep people from going in). Obviously I don’t like these laws because they hinder our ability as peaceful sidewalk advocates to reach the people going in for abortion. When I started getting into sidewalk advocacy, the facility we went to was in a medical office park, so there was a large parking lot between us and the people going in. It makes it really tough to seem compassionate when you have to yell in order to be heard. There was a lot of shouting “GOOD MORNING!” those days.

What advice would you give someone interested in sidewalk counseling?

Expect to wait around a lot. It takes patience. But also stay prepared so you’re not caught off guard when someone actually takes the time to talk to you and needs help. Preparation is key.

What advice do you have for people who don’t sidewalk counsel but still want to help women with crisis pregnancies?

Donate to local pregnancy centers! If you don’t have the funds, ask if they need volunteers. You can also do a lot of outreach online, in forums and on social media where many people will ask questions if they’re considering abortion. Make your pro-life stance clear to social media friends, and in a nonjudgmental way; you want to make sure they know you’re a safe person to reach out to if they ever find themselves unexpectedly pregnant. If you’re a praying type, pray for the people out on the sidewalk.

I think the pro-life movement is vibrant and powerful, and that as a whole, we are most successful when we allow for a diversity of opinion on unrelated issues and focus on the human rights injustice at hand. Let’s spread information about the truth of abortion. Let’s find ways to help parents considering it and heal those who have already gone through with it. Let’s debate which political strategy is going to be most likely to truly eliminate abortion. Basically, I believe the movement would be better if it were tied less closely to specific party platforms. I know too many people who were raised in a pro-life, conservative household, grew up, realized their politics didn’t align with their parents’, and decided that for that reason they could no longer be pro-life. It shouldn’t be a partisan issue. It’s a human rights issue, and we have to remind people of that.

(Check out the list of ways you can support sidewalk counselors from HowToBeProlife.com.)

That time of the year

The unlikely story of the pro-life author of “Reconsidering Fetal Pai...

Pro-Life Messages in Fantasy and Science Fiction
Scroll to top