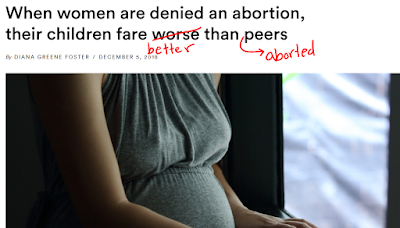 Came across this article recently and the headline caught my eye.

Broadly speaking, pro-choice people treat abortion as if it prevents a child from coming into existence, rather than destroying a child who already exists. Diana Greene Foster—the article’s author and principal investigator of the study being summarized—suggests as much when she says:

Whether to have an abortion can be a difficult decision to make. The fetus could develop into a unique person that would never get another chance to be born. [Emphasis added.]

From her perspective, the entity being destroyed is not yet a unique person, but could someday be one. With that framework it makes sense to ask “Under these circumstances, is it responsible or moral to bring this child into existence?”


One way to answer the question is to compare the outcomes of two groups of children:
But of course pro-life people will see this whole discussion in a totally different light. Pro-life people recognize that abortion destroys already-existing human organisms, and we view those humans as morally relevant and deserving of protection. Under that framework, we would compare the outcomes of three groups of children:

It was with this mentality that I read the above article and its underlying study; while it’s interesting to compare Groups 1 and 2, the backdrop is always the comparison between Groups 1 and 3. How do children born to women denied abortion fare compared to children aborted? They fare better. Because they aren’t dead.

Setting aside the glaring difference in pro-choice and pro-life perspectives, though, I read the study with interest. Here are the points that caught my eye:

When women were denied legal abortion, the vast majority of them birthed their children. Contrary to the common pro-choice talking point, preventing women from getting legal abortion doesn’t simply push them to get dangerous illegal abortions. In this study, of the 195 women turned away from abortion clinics who completed all the study’s interviews, 2% miscarried, 23% obtained abortions elsewhere, and 75% gave birth. (This result dovetails with the many studies that find abortion restrictions decrease abortions.) Of the women who gave birth, 90% raised their children themselves (compared to the 10% who chose adoption).

Index children were no more likely than subsequent children to experience:

Similarly, index children were no less likely than subsequent children to:

The two groups did have some differences, though. Index children were slightly less likely than subsequent children to achieve gross motor milestones. They were more likely to have been injured (mostly accidents and falls) in the last 6 months. Index children were less likely to live in households with the mother’s male partner and more likely to live in households with other adult family members.

Mothers of index children were more likely to report they struggled in the last month to afford basic needs (75% of index mothers reported this struggle compared to 55% of subsequent mothers). Index mothers were also more likely to struggle to bond with their children. In her article, Foster elaborates:

Women are also much more likely to report poor maternal bonding — feeling trapped as a mother, resenting their baby, or longing for the “old days” before they had the baby — with the child born after abortion denial than with the next child born following a wanted abortion.

Specifically the study found that 9% of index mothers reported poor maternal bonding compared to 3% of subsequent mothers. This difference is substantial but the statistic also still indicates that over 90% of mothers bond just fine to the children they weren’t able to abort.

It’s also noteworthy that the study doesn’t measure whether women raising index children retrospectively wish they had gotten abortions instead. Struggling to bond with your child is not the same as wishing your child didn’t exist. All parents experience resentment and frustration at some points or others, but that doesn’t mean we wish we weren’t parents or wish our kids weren’t our kids.

[March 2021 update – Other data from the Turnaway study indicate 96% of women denied abortion no longer wished they could have one five years later. This stat would include even most of the women who reported struggles with maternal bonding.]

Of course we don’t want children to grow up in harsh circumstances. While the circumstances of a child’s birth aren’t fate for the rest of the child’s life, they are still a major influence. Ideally all children would be conceived in circumstances where their parents are as prepared as possible to best care for them. Fewer unintended pregnancies mean not only fewer abortions but also fewer births and less child-rearing in difficult situations, which is why preventing unintended pregnancy should be easy common ground.

Still, we don’t share the pro-choice view that it’s better to help a woman get a wanted abortion and birth a different child later than it is to try to protect the child she is already carrying. We can’t share that view because we believe that:

This study found index children do not differ from their (living) peers in most respects. These children still reach developmental milestones with the same average scores as their counterparts, and in the vast majority of cases index children live with their biological mothers who feel bonded to them. While there are some differences that we would hope to mitigate, the results aren’t anywhere close to enough to justify advocating for these children to be aborted for their own sakes. It’s one thing to argue for abortions in terms of benefits to the women seeking them. But arguing for abortion for the sake of those being aborted is nonsensical.

I usually don’t think my pro-life work makes much difference, so why do I keep doing it?