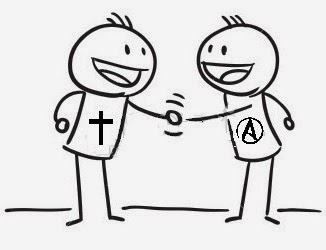 SPL promotes religious
diversity in the pro-life movement. Occasionally religious pro-lifers express
concern that this goal implies they’re being asked to deny their faith for the
sake of the abortion debate. Last Saturday, Josh and Clinton demonstrated how
Christians can affirm their faith while still including non-Christians in the
conversation. I still hope for an increasing secular presence in the pro-life movement, to the point
where pro-lifers like me can have non-religious programs to learn through.
However, if you’re a Christian pro-lifer looking to hit that balance between religious inclusiveness and your own faith, last Saturday’s JFA seminar was a great example of how to do it.

“I’m here to listen, not to judge.” Interview with a young Catholic sidewalk counselor

Is the pro-life movement anti-sex?

Interview: Pro-life Democrats reflect on the Democratic Party and the pro-life movement
8 replies