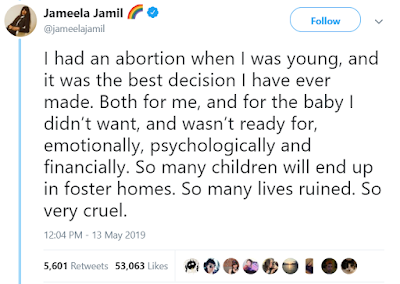 [The original FB post where we collected these answers can be found here.
We’ve since created a FB album with more such perspectives here.]

Text reads: “I had an abortion when I was young, and it was the best decision I have ever made. Both for me, and for the baby I didn’t want, and wasn’t ready for, emotionally, psychologically and financially. So many children will end up in foster homes. So many lives ruined. So very cruel.”
As we’ve discussed before, it’s one thing to argue for abortion for the sake of the woman who doesn’t want to be pregnant/bear a child; it’s quite another to argue abortion is in the best interest of the human being aborted. But Jamil is definitely not alone in believing abortion is a mercy. We hear sentiments like her own frequently: 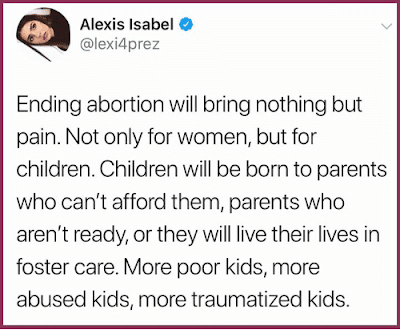 Text reads: “Ending abortion will bring nothing but pain. Not only for women, but for children. Children will be born to parents who can’t afford them, parents who aren’t ready, or they will live their lives in foster care. More poor kids, more abused kids, more traumatized kids.” 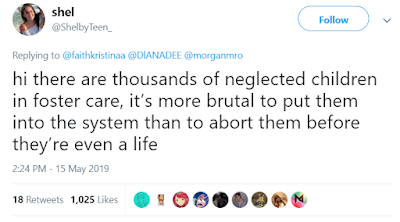 Text reads: “hi there are thousands of neglected children in foster care, it’s more brutal to put them into the system than to abort them before they’re even a life.” 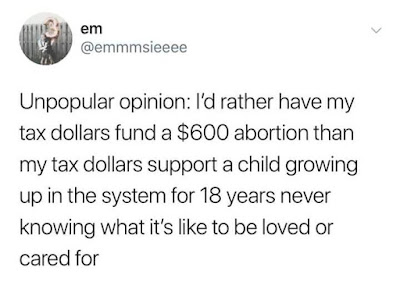 Text reads: “Unpopular opinion: I’d rather have my tax dollars fund a $600 abortion than my tax dollars support a child growing up in the system for 18 years never knowing what it’s like to be loved or cared for.”
These views prioritize abortion over foster care, but we’ve seen similar sentiments prioritizing abortion over a life with disabilities or generally being poor, etc. Those advocating for abortion as mercy rarely seem interested in the voices they are allegedly advocating on behalf of–the very people who have grown up in foster care or lived with disabilities or poverty. So in this post we try to amplify some of those voices.
Video of Frank Stephens’ testimony before Congress regarding abortion in the case of Down Syndrome. “I don’t feel I should have to justify my existence.” 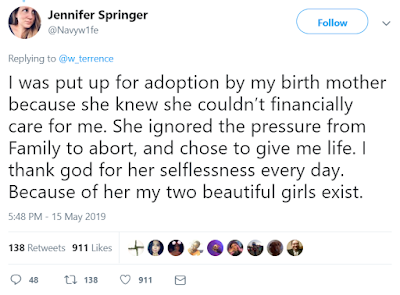 Text reads: “I was put up for adoption by my birth mother because she knew she couldn’t financially care for me. She ignored the pressure from family to abort, and chose to give me life. I thank god for her selflessness every day. Because of her my two beautiful girls exist.” 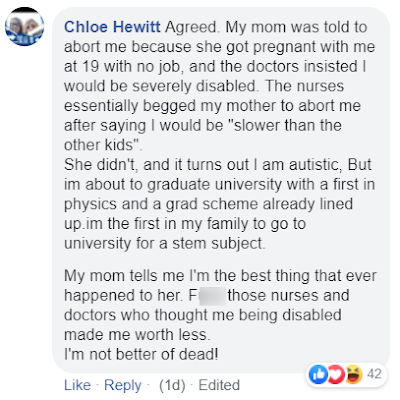 Text reads: “My mom was told to abort me because she got pregnant with me at 19 with no job, and the doctors insisted I would be severely disabled. The nurses essentially begged my mother to abort me after saying I would be ‘slower than the other kids.’ She didn’t, and it turns out I am autistic. But I’m about to graduate university with a first in physics and a grad scheme already lined up. I’m the first in my family to go to university for a STEM subject. My mom tells me I’m the best thing that ever happened to her. F*** those nurses and doctors who thought me being disabled made me worth less. I’m not better off dead!” 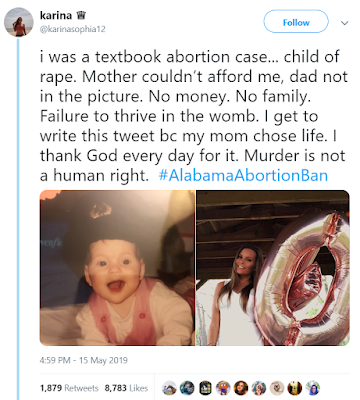 Text reads: “I was a textbook abortion case…child of rape. Mother couldn’t afford me, dad not in the picture. No money. No family. Failure to thrive in the womb. I get to write this Tweet because my mom chose life. I thank God every day for it. Murder is not a human right. #AlabamaAbortionBan.” 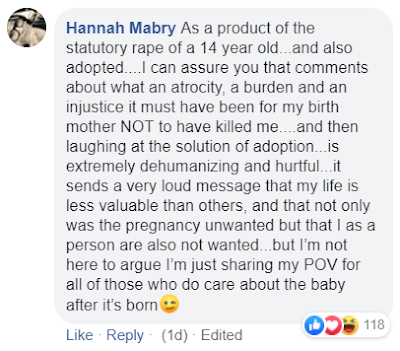 Text reads: “As a product of the statutory rape of a 14 year old…and also adopted…I can assure you that comments about what an atrocity, a burden and an injustice it must have been for my birth mother NOT to have killed me…and then laughing at the solution of adoption…is extremely dehumanizing and hurtful. It sends a very loud message that my life is less valuable than others, and that not only was the pregnancy unwanted but that I as a person am also not wanted.” 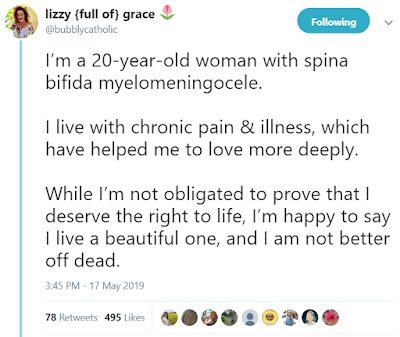 Text reads: “I’m a 20-year-old woman with spina bifida myelomeningocele. I live with chronic pain & illness, which have helped me to love more deeply. While I’m not obligated to prove that I deserve the right to life, I’m happy to say I live a beautiful one, and I am not better off dead.” 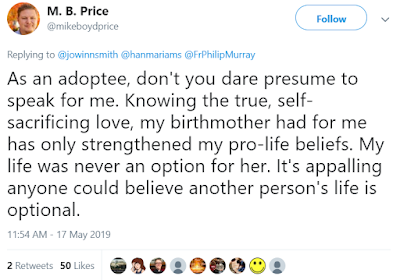 Text reads: “As an adoptee, don’t you dare presume to speak for me. Knowing the true, self-sacrificing love my birthmother had for me has only strengthened by pro-life beliefs. My life was never an option for her. It’s appalling anyone would believe another person’s life is optional.” 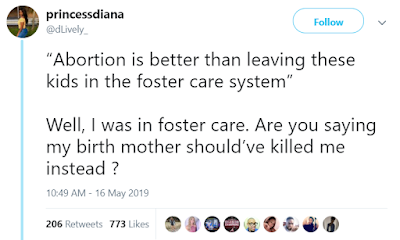 Text reads: “‘Abortion is better than leaving these kids in the foster care system.’ Well, I was in foster care. Are you saying my birth mother should have killed me instead?”

Text reads: “Having spent my entire childhood in foster care, I feel physically SICK every time I see a tweet saying we are all basically better off dead.” 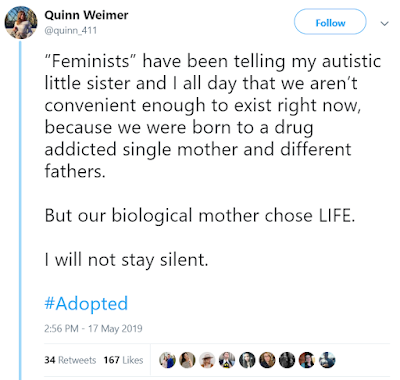 Text reads: “‘Feminists’ have been telling my autistic little sister and I all day that we aren’t convenient enough to exist right now, because we were born to a drug addicted single mother and different fathers. But our biological mother chose LIFE. I will not stay silent. #Adopted.” 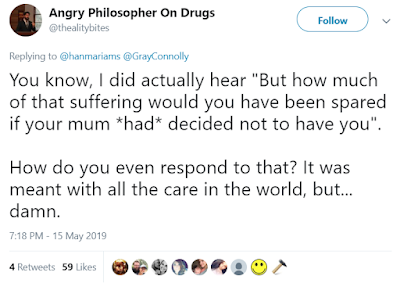 Text reads: “You know, I did actually hear ‘But how much of that suffering would you have been spared if your mum *had* decided not to have you?’ How do you even respond to that? It was meant with all the care in the world, but…damn.” 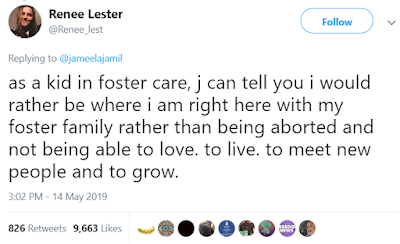 Text reads: “As a kid in foster care, I can tell you I would rather be where I am right here with my foster family rather than being aborted and not being able to love. To live. To meet new people and to grow.”

Text reads: “People are saying my mom should have aborted us so we wouldn’t have went through foster care and that’s absolutely crazy. Never kill a baby because you think their life will be tough. Give them a chance. That tough life has made me a strong and wise young man.” 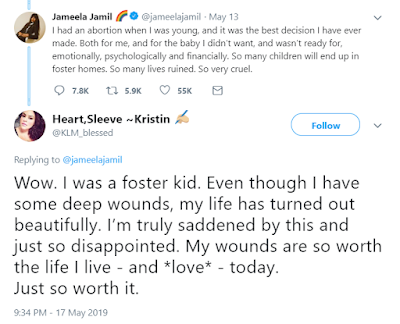 Text reads: [Jameela Jamil’s original tweet followed by] “Wow. I was a foster kid. Even though I have some deep wound, my life has turned out beautifully. I’m truly saddened by this and just so disappointed. My wounds are so sorth the life I live – and *love* – today. Just so worth it.” 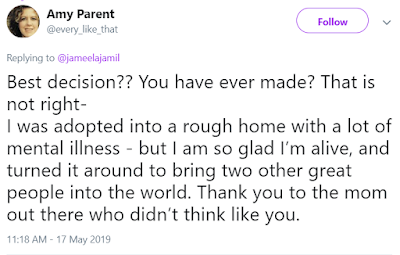 Text reads: “Best decision?? You have ever made? That is not right. I was adopted into a rough home with a lot of mental illness – but I am so glad I’m alive, and turned it around to bring two other great people into the world. Thank you to the mom out there who didn’t think like you.”
Text reads: [Original “unpopular opinion tweet, followed by multiple comments:]

“Eh this post is kind of embarrassing and offensive. Pro-choicers are starting to make it seem like all kids in foster care have lives that are complete shit and don’t grow up to be great people and do great things. They have aspirations, hopes and dreams and desires just like anyone else. Many of them find great families and wouldn’t change their lives for anything. Those kids and adults that are or were in foster care have to keep seeing stuff like this that is basically strangers saying they would rather them be dead.”

“I’m a foster child and I feel highly offended.”

“I am pro-choice, however, as a child raised in the system, who was constantly moved from home to home, this post is so off base. If you’re so concerned about children living in bad homes and not feeling loved, go be a foster parent and show those kids love and what a good home is.”

“I was in foster care most of my childhood. It’s not all bad. I’m happy to be alive, thanks.” 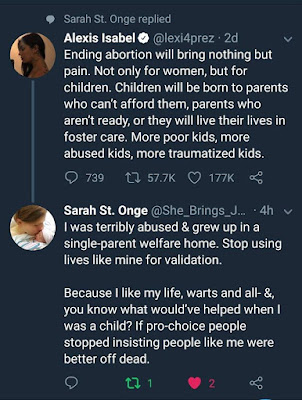 Text reads: [Original “ending abortion will bring nothing but pain” tweet, followed by:] “I was terribly abused and grew up in a single-parent welfare home. Stop using lives like mine for validation. Because I like my life, warts and all–and you know what would’ve helped when I was a child? If pro-choice people stopped insisting people like me were better off dead.”
Often when people speak out about their lives and their worth, pro-choice people will respond with something like “No one is saying you’re better off dead. We’re only saying that women should have a choice.” But if you read through these conversations again, you can see that’s not the case. The argument is not merely that abortion is necessary for the sake of the woman; the argument is also that abortion is better for the sake of the human being aborted. If abortion is supposed to be a better outcome for the child than being born into poverty, disability, foster care, etc., then the argument very much is that these people would be better off dead or having never lived. And it makes sense for all people in these circumstances to take that argument personally.
Further Reading:
Top recommended:
More:

Your experiences with CPCs and pregnancy resource centers.

We asked, you answered: why did you convert from being pro-choice to pro-li...