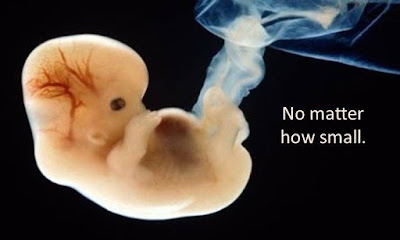 Because of Initiative 26, I’ve seen a lot of debate recently about the definition of “personhood.”  Our society finds it abhorrent to deny people rights.  But the personhood debate implies that fetuses, though human, aren’t people, making our denial of their rights more palatable.
Truth be told, I have a difficult time feeling emotional about abortion at the earliest stages.  It’s hard to identify with an eight-celled embryo.  It’s easier to empathize with an eight-week-old fetus.  And so it goes.  I think many people are horrified by abortion at 8 months, but less people get emotional about abortion of a microscopic “seed.”
The thing is, I don’t think rights should be based on our emotions. Rights shouldn’t be so arbitrary.
I try to consider what makes a “person” distinct from a “human being” in a non-arbitrary way—as consistently and objectively as I can.  I cannot see a consistent definition that would exclude the fetus but include all other people.
If personhood requires self-awareness, the fetus is not a person.  Neither are newborn infants or coma patients.
If personhood requires viability, the premature fetus born in a technologically advanced society is a person.  The equivalent premature fetus born in a more primitive region is not a person.
If personhood requires physiological independence, the fetus is not a person.  Neither are patients on respirators or dialysis. Neither is the theoretical Violinist.
To my knowledge, every definition of “person” that excludes the fetus also excludes other subsets of humans that society already considers people. Therefore, it seems the options are:
1)      Pick a consistent definition of “person” that excludes both the fetus and patients in critical care, the Violinist, newborn infants, etc.
2)      Create an inconsistent definition of “person” crafted to exclude the fetus and only the fetus.
3)      Pick a consistent definition of “person” that includes everyone.
I can’t bring myself to be willfully inconsistent, nor can I bring myself to embrace a consistent definition that would consider it morally permissible to “terminate” newborns or hospitalized patients.
The only option I can accept both rationally and morally is that human beings are people. The end.

A Kantian Analysis of Bodily Autonomy

How does the pro-life movement look to LGBT pro-lifers?