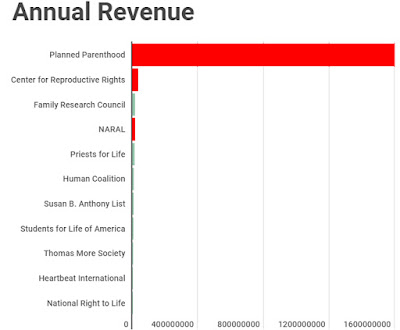 The propagandists at Reproaction have really outdone themselves this time, hilariously arguing that there is “big money” behind “Big Pro-Life.” I wish! In reality, the abortion industry massively outspends pro-life advocates. If you’ll allow us secular folks the use of a Biblical metaphor, the abortion lobby is Goliath, claiming to be a scrawny shepherd boy for sympathy points.

Reproaction’s infographic names ten supposedly “big money” pro-life organizations, with two obviously leading the financial pack by orders of magnitude: Heritage Foundation and Alliance Defending Freedom. This is misleading because Heritage and ADF’s budgets are not devoted to ending abortion. Both are multi-issue conservative organizations, spending funds on everything from tax reform to the intersection of academic freedom and exercise of religion. What Reproaction has done here is analogous to citing the ACLU’s massive budget to claim that there is big money behind Big Abortion.

Remove Heritage and ADF from the analysis, and the picture changes dramatically: the average revenue of the remaining eight pro-life organizations is a mere $8 million. And while I would personally love to have $8 million, that amount won’t get you very far in the land of politics.

For comparison, NARAL Pro-Choice America brought in $14.4 million last year. The Center for Reproductive Rights had revenues of $34 million. And the granddaddy of them all, Planned Parenthood, has an annual income over $1.6 BILLION, with a B, much of it provided by taxpayers who conscientiously object to the dismemberment of human children.

So let’s fix that chart, shall we?

And here it is without Planned Parenthood, so we can get a better look at the detail: 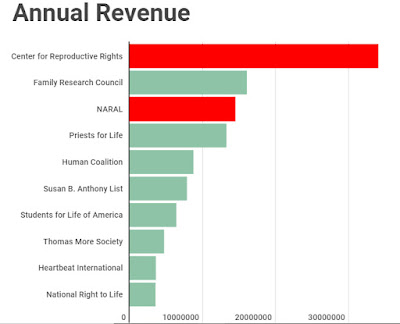 Money is not on our side. But the truth is. Despite being the financial underdogs, the pro-life movement presses on year after year, and we will not rest until every unborn child is protected. 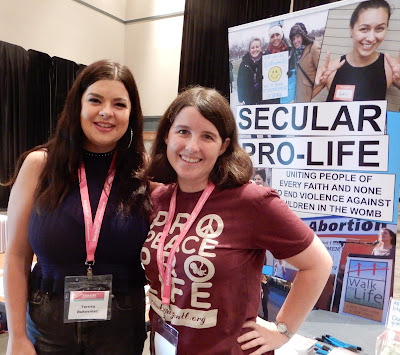 Incrementalism in the Anti-Slavery Movement

“Except in the Womb”

“May your character be so solid…”

We asked, you answered: What are the top facts you wish people understood about...
Scroll to top