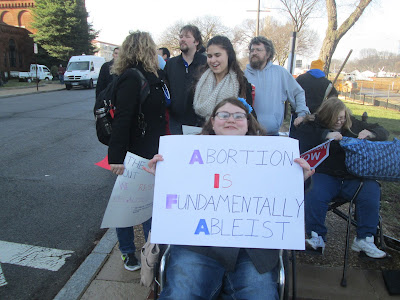 A gym teacher of mine once promised to “separate the men from the boys.” While I’m sure that would provoke a lawsuit today, the abortion industry is still separating the girls…

…from their arms, legs, and torsos.

By 16 weeks, a child’s sex is usually visible on an ultrasound, and for too many girls, that’s a death sentence. A cultural preference for sons fuels sex-selective abortion, and not just in far off places: the Canadian Medical Association Journal described Canada as “a haven” for those seeking to abort their daughters.

Planned Parenthood offers a haven of its own.

In 2012, pregnant volunteers from the group Live Action brought hidden cameras to multiple Planned Parenthood facilities. On each visit, the investigator said she wanted an abortion if it turned out she was carrying a girl. As the resulting footage shows, staff were happy to help.

While some nations have tried to curb gender-selective abortion, Planned Parenthood doesn’t want the United States following suit: when Arizona made sex- and race-selective abortions a felony, the organization wasn’t happy. Most Americans feel differently.

A 2012 poll conducted by the Charlotte Lozier Institute found that 77% of Americans (including 80% of women) thought it should be illegal to abort “when the fact that the developing baby is a girl is the sole reason for seeking an abortion.” In fact, even some abortion advocates draw the line at gendercide.

By contrast, there isn’t nearly as much opposition to abortion in cases of disability. That’s curious when you look at the reasoning.

Last year, a Quebec mother sought an abortion at 35 weeks after doctors determined her son was small and had skeletal abnormalities. According to her lawyer, she “didn’t want her child to suffer the consequences of being physically different.” If social stigma is enough to justify abortion, then those pushing sex-selection have a good case. After all, there are a lot of cultures where women enjoy far fewer rights than men.

Others will argue that abortion is more humane than letting a child with disabilities suffer, but it’s not clear why that rationale shouldn’t apply to girls too. In some parts of the world, anti-female violence is rife. It can include honor killings, forced marriages, and genital mutilation—often done without anesthesia. One of my best friends has a disability, and her daily life involves far less suffering than that.

And then there’s financial strains a special needs child can bring. Well, girls are frequently aborted in India because the dowries they require can wipe out a family’s finances. And unlike with disabled children in America, there’s no public assistance to offset that cost.

If these reasons don’t justifying killing girls, then they don’t justify killing other children either; you can demand that our laws reflect that. Something else you can do? Tell Congress you want Planned Parenthood’s half billion dollars in annual taxpayer funding sent to federally qualified health centers and community health centers instead. They’re more accessible and offer services Planned Parenthood won’t.


Ana Carolina Caceres is a Brazilian journalist who was born with microcephaly. When some cited her condition as a reason for Brazil relax its abortion laws, Caceres pushed back, saything that “those who have abortions are not giving their children a chance to succeed.” Whether it’s because of their sex or their disability, a chance to live isn’t something children should be denied.

[Today’s guest post by Adam Peters is part of our paid blogging program.]

Down Syndrome Abortion and the Courts

Sex-Selective Abortion on the Rise Internationally

Pro-Life Buddhist Gives Baby with Down Syndrome a Loving Home

“Grassroots Defunding” Campaign Connects Women to PP Alternativ... To those who have conceived while using birth control
Scroll to top