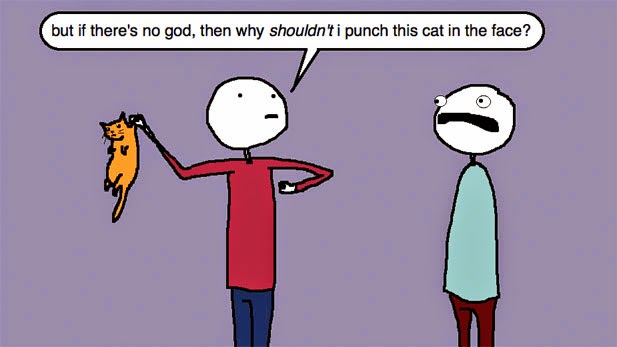 I’ve had a few Christian pro-life friends of mine (kindly) tell me they don’t really understand how a secularist can defend the pro-life position. Sure, they get that we don’t need religion to understand fetal development, and we don’t need to believe in a god to recognize that abortion is violence. But they trip over how a secularist could defend the pro-life view on a metaphysical level. Why should secularists care about fetal development or the violence of abortion? What transcendent reason do we have to care about human life in the first place?

In other words, these Christian pro-life friends of mine want to know how I, as a secularist, can truly defend the pro-life position without the Imago Dei.

The Imago Dei (“Image of God”) is the idea that all humans are made in God’s image—that humans reflect God’s moral, spiritual, and intellectual nature. Many Christians believe the Imago Dei is why we humans are valuable in the first place and why we’re more valuable than other species. If there’s no special connection to God, if there’s no soul, many Christians have a hard time understanding why we should value humans any more than any other random collections of atoms meandering through existence.

A lot of times we secularists take offense to the question. We think Christians are saying secularists can’t or shouldn’t care about anyone, as if, by definition, we can’t be good people. We think Christians are saying we inherently suck. And yes, sure, there are some Christians who actually think that. But most of the Christians I know aren’t saying that at all. They aren’t saying “You can’t be good.” They’re saying “You clearly are good. I just don’t get where you believe your goodness comes from.” It’s not an accusation, it’s a curiosity.

In this analogy, Secular Pro-Life purposely doesn’t articulate a position on why the sky is blue. We start with the premise that the sky is blue, and go from there. That is, we start with the premise that human beings are valuable, and build our pro-life position off of that.One of the reasons we take this approach is because secularists don’t have one unifying reason for why human beings are valuable. Secular people use a wide assortment of ethical approaches to reach the same conclusion.

Christians, who have a specific, unified answer to why humans are valuable (the Imago Dei), sometimes find our secular stance incomplete, since we avoid the question. Some of my Christian pro-life friends have asked me how SPL can reach out to other secularists if we don’t offer some metaphysical answers.

But here’s the thing: other secularists aren’t usually looking for metaphysical answers. I have never, not once, had a secularist sincerely ask me to explain why we should care about other human beings. It’s only Christians who ask me that, and only in the context of trying to understand our different religious perspectives.

My fellow secularists aren’t looking for reasons to care about humanity. They already care. They already believe murder is wrong and that we should take care of one another. The secular abortion debate is not about whether human beings are valuable. In most circles, that premise is just a given. The secular abortion debate is about whether the fetus counts as a human being and, if so, whether that’s enough to trump bodily rights. And since those are the premises secularists debate, those are the premises SPL focuses on.

Secular pro-life in the news

Atheists don’t believe in us.
106 replies

One Absurd Conclusion of the Pro-Choice Position