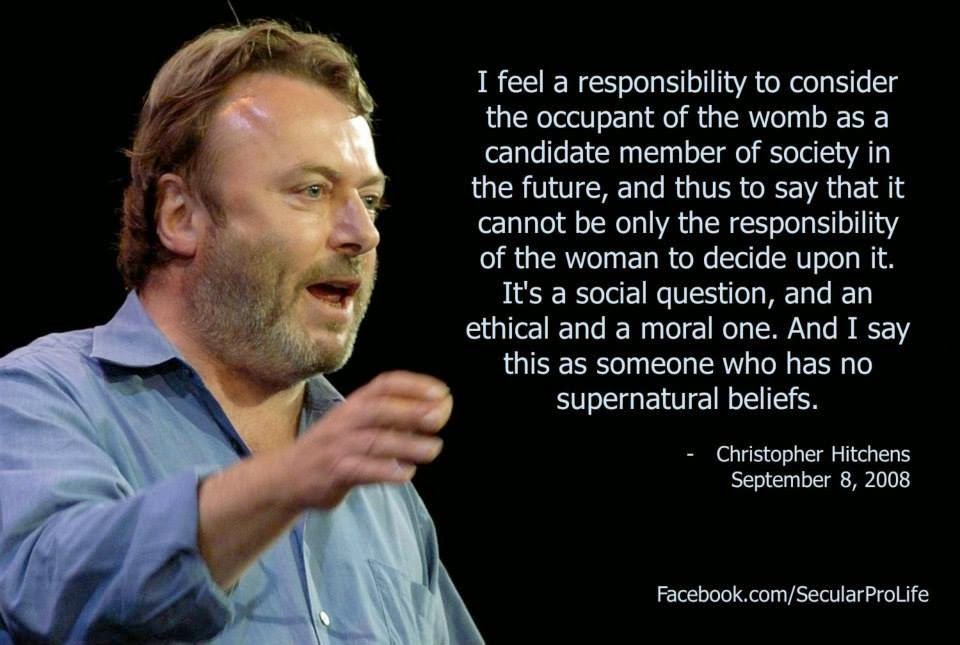 Last week Pro-Life Humanists’ Kristine Kruszelnicki wrote a blog post featured on Hemant Mehta’s Friendly Atheist blog (“Yes, There Are Pro-Life Atheists Out There. Here’s Why I’m One of Them.”)

I was pleased and impressed to see that Hemant posted the piece. In my experience working with Secular Pro-Life, pro-choice secularists tend to be very hostile toward pro-life secularists. They’re not just angry that we’re pro-life; they’re angry we are pro-life and secular. Often times they will imply or outright insist that we are lying about our secularism, that we are secretly religious and we’re pretending to be secular to trick people into… something. Listening to us, I guess.

In any case, even if they begrudgingly admit secular pro-lifers exist, they don’t believe we should have a voice in secular communities. So since Hemant gave Kristine a platform he’s gotten a fair bit of backlash (examples here). (By the way, if you are a pro-life secularist, feel encouraged to contact Hemant and thank him for giving our side a voice.)

But most of the backlash focuses not on Hemant, but on Kristine’s piece itself. I’m sure there are a lot of responses to Kristine piece that I haven’t read, so I don’t expect the following will cover every objection. Still, here’s a quick overview of some of the reactions.

The Friendly Atheist created quite the brouhaha lately by publishing a guest post by Kristine Kruszelnicki, president of Pro-Life Humanists. This post was titled “Yes, There Are Pro-Life Atheists Out There. Here’s Why I’m One of Them.” My response? Thank you, Captain Obvious.

No seriously. Are there really people who think that atheists can’t be against abortion?  I do not understand this reasoning. Is there supposed to be a litmus test, that if you’re an atheist you’re automatic and by definition a-okay with abortion?

I mean… apparently. Yes. We’ve got one set telling us we are only pretending to be secular, that we’re secretly religious (or, at minimum, “infected by religious ideas“), and then we’ve got another set telling us it’s so obvious that atheists can be pro-life that it’s foolish to bother pointing it out?

Actually, overall I like Libby Anne’s piece; of course she and I don’t agree on everything, but she makes a lot of good points, talking about how so many issues don’t hinge on religion, and how

[Kristine’s] “secular” argument against abortion is no different from the arguments I and other evangelical kids like me grew up hearing. In my experience, the only point where God enters the evangelical equation is the idea that we should value all human life, from conception to natural death, because God values all human life. Atheists who believe life is inherently valuable can build this argument the same way.

I’m not sure why she put “secular” in quotes–is she implying Kristine’s argument isn’t really secular? (Ha ha ha) I thought one of the main points of Libby Anne’s post was it’s obvious you can be secular and pro-life, so that’s a bit confusing.

But anyway, she’s right. Many religious people grow up with, and use, the same or very similar arguments to the ones Kristine put forth in her post. Most secular pro-choicers claim the arguments are therefore religious, but that doesn’t follow. That’s like saying because most Catholics think birth control is morally acceptable, anyone who accepts birth control must be Catholic. (This mistake–thinking if a premise is true, its converse must be true–is actually a very common logical misstep.)

So no, just because a lot of religious people use an argument doesn’t mean the argument is inherently religious, and Libby Anne recognizes the distinction. I appreciate that. If more people realized the difference, perhaps Kristine wouldn’t need to be so explicit about the fact that she is both an atheist and pro-life. So far, though, that’s not the case.

“Having a Reasonable Debate About Abortion“

This piece is not a response to Kristine’s post specifically. It’s a response to a larger trend Greta Christina sees in the atheist community–the trend in which people she respects and thinks of as allies (such as Hemant) act as if there’s room for reasonable debate among atheists on abortion. You can get an idea for how Christina feels about said trend here:

See, here’s the thing. I don’t see a lot of atheist leaders and bloggers suggesting that we have a calm, reasonable debate about whether homosexuality is a mental illness and gay people should be locked in mental institutions. I don’t see them suggesting that we have a calm, reasonable debate about whether or not black people are human beings or are some other sub-human species who should serve white people. I don’t see them talking with reporters about those arguments, or giving them space in their blogs without comment. I don’t see them saying that because we’re freethinkers, because we support free inquiry and the free exchange of ideas, that therefore we should freely inquire into the issue of whether black people and gay people are fully human with the basic right to bodily autonomy. I don’t see them saying that the “be willing to question anything and everything” spirit of skepticism applies to questions that have dehumanization built into their very core. I see them recognizing these arguments as morally reprehensible on the face of it.

So why is abortion a special case?

Christina certainly isn’t the only one making these points–there were plenty of comments on Kristine’s original post along the same lines:

So some pro-choicers think being pro-life is as reprehensible as wanting to lock up homosexuals and enslave black people. I’m sure this comes as a surprise to PLAGAL and the 40% of Black non-Hispanics who think abortion should be illegal.
These nasty comparisons make sense… as long as you assume the fetus is irrelevant. If you believe the pregnant woman is the only human worth any moral consideration in the abortion debate, it makes sense to feel bewildered and betrayed by people saying maybe her right to abortion isn’t absolute. You don’t see why people would acknowledge a controversy because you’re omitting one of the most fundamental questions of the entire debate: what is the fetus?
There’s no comparison between the abortion debate and these other issues, because freeing the slaves and fighting for gay rights don’t require looking the other way while hundreds of thousands of humans (or, depending on your stance, “potential humans”) are killed each year. If you ignore this profound moral concern, it makes sense to be confused and angry that other people see a debate worth having.
3. PZ Myers:

So. This guy.
I saved this post for last because I think it’s on a whole different level than the other entries. Libby Anne talks about what it means to be an atheist, and Greta Christina works through her anger over what she thinks people think about women. Those are big issues. Complicated issues. Issues that merit serious discussion.
But PZ Myers is not taking on complex social and philosophical issues. He’s waffling about simple facts. Kristine pointed out that human organisms–including the zygote, embryo, and fetus–belong to the human species. Based on this point (and a whole lot of twisting of her original post), PZ claims Kristine is “lying” about science.

But what about this claim that science can tell us who among us belongs to the human species?

First question I have is…which species concept are you using? There are a lot of them, you know; I daresay we might be able to find a few, that when inappropriately and too literally applied, would define away my status as a human, which simply wouldn’t do. There are also a lot of non-scientific or pseudo-scientific definitions of what constitutes a human that have been historically abused. Were the Nazis being scientific when they defined sub-species of humans and classed Jews, Gypsies, and Africans as something less than fully human? What, exactly, is Kruszelnicki’s “scientific” definition of human, that she’s using so definitively to declare a fetus as completely human?

Do you know what you just read, guys? This is what desperation looks like.

If PZ could give a commonly accepted definition of “species” that debunked the idea that human organisms–including zygotes, embryos, and fetuses–are part of the human species, he would. If he could give a commonly accepted definition of “organism” that did not include zygotes, he would. But he doesn’t give those definitions. He can’t. Because zygotes are organisms, and human organisms are part of the human species. PZ can do a bunch of hand wavy complaining about how he’s not sure what Kristine means (and try to assert that his alleged lack of understanding equals her dishonesty), but that’s all he’s got. There’s no substance here.

He’s right that there are many ways of thinking about the concept of “species.” But Kristine’s perspective doesn’t rely on some obscure, slippery definition. How about a group of organisms having common characteristics and capable of mating with one another to produce fertile offspring? You can find that description on the lying, anti-woman, secretly religious website: Biology Online.

Kristine claims “science defines a fetus as a biological member of our species.” PZ tries to brush off Kristine’s perspective as “traditional and colloquial” (as if those attributes, in themselves, make an idea anti-scientific), but in reality Kristine’s assertions rely on a very common–and scientific–species concept: the biological species concept. UC Berkeley’s “Understanding Evolution” website describes the biological species concept as the concept used “for most purposes and for communication with the general public.” How dare Kristine fail to define that for someone like PZ–he only has decades of background in developmental biology. That must have been very confusing for him.

I wonder, does PZ call people liars when they say they are members of the species Homo Sapiens? You know, because they haven’t clarified which species concept they’re using? Would he think it “dishonest and more than a little annoying” for a pregnant woman to say her fetus is a member of her species? Please.

No amount of swearing or bold, italics, and ALL CAPS will make up for the fact that PZ’s indignant objections are utter nonsense–political rantings smothered with enough science-y words to mollify the readers who want him to be right to begin with. (He said “totipotent” and “multicellularity,” guys! I guess his blog post must be logical and fact-based.) See Amanda Marcotte, Greta Christina, and Avicenna reference PZ’s science “education,” or recall when Matt Dillahunty dodged a question by throwing it to PZ.

Thank goodness the pro-choice side has people like PZ Myers to steer them clear of Kristine’s “anti-scientific” claims. Otherwise they might get confused and start believing crazy things–like the idea that human organisms belong to the human species.


These three blog posts are just a sampling of the reactions secular pro-life ideas like Kristine’s often get in atheist circles. Yet, despite the inevitable backlash, Kristine continually puts herself and her message out there. My hat goes off to her.

Jen Roth on Point of Inquiry