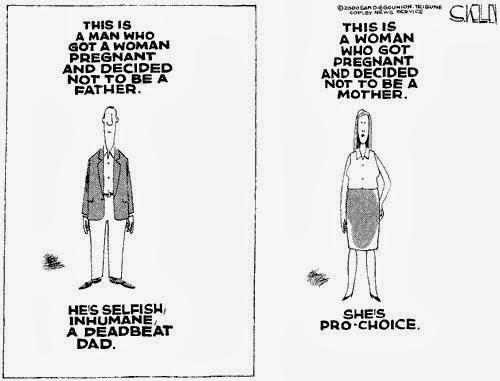 When arguing about abortion, I’ve
seen a lot of people claim “sex isn’t a contract.” Other variations
of this idea include:
·
Consent to A doesn’t mean
consent to B (that is, consent to sex doesn’t mean consent to reproduction).
·
You clearly don’t consent to reproduce
if you use birth control.
·
Sex is not a crime and shouldn’t
be punished / Rights cannot be restricted unless there is a crime.
The problem is, when it comes
to reproduction, these arguments only apply to women.
If a man gets a woman
pregnant–be it his wife, girlfriend, affair, or one night stand–he is legally
bound to provide support for that child. In other words, because the man
participated in the child’s conception (because the man had sex), his rights
are altered. It doesn’t matter if the man was only consenting to sex, and not
to reproduction. It doesn’t matter if he used birth control. It doesn’t
matter that sex isn’t a crime. He fathered the kid, so the law considers him
responsible for the kid.
And the law takes a pretty hard
line on the subject. Courts can require a father to pay child support based not
just on what he earns, but on what courts believe he has the ability to earn. Child support obligations remain even if a father goes to prison, or
declares bankruptcy.
Even if he wants to terminate his parental rights (and therefore his parental
responsibilities), the courts usually won’t allow it unless there is another adult prepared to adopt the child
and take over that responsibility. And there are many methods for enforcing child support. A man’s tax refunds can be intercepted, his
property seized, business or occupational license suspended, and in some states
his driver’s license can be revoked. If he still fails to make payment, he can be
held in contempt and given jail time.
In short, if a man has sex he
runs the risk of being (rather tightly) legally bound to any new life he
creates. In the essay “Abortion and Fathers’ Rights“, author Stephen D.
Hales summarizes the situation:
“…the father, having
participated in conception, cannot escape the future duties he will have toward
the child. The father can decide that he cannot afford another child, that he
is not psychologically prepared to be a parent, that a child would hinder the
lifestyle he wishes to pursue, and so on, to no avail.”
Sound sad? If a man is forced
to pay child support, that could mean serious emotional, psychological,
financial, and social repercussions for him. So why do we have child support
laws? Is it because we hate sex, and want to punish people for having sex?
No, of course not. And interestingly, you rarely see anyone even
suggest as much. No, it’s clear to most people that we have child support laws
in order to, you know, support children. Child support laws aren’t enforced to
punish men for having sex—they’re enforced because it’s best for the child. In
the same way, abortion shouldn’t be outlawed to punish women for having sex—it should
be outlawed to protect fetal life. In both cases, it’s not about punishment,
it’s about protection.
And that’s as it should be.
I’d love to live in a world in
which there are no unplanned pregnancies and no unintentional parents. I think
people should have control over whether they become parents, in the sense that people
should have control over whether they get pregnant or get someone pregnant.
That’s why I support comprehensive sex education: I want people to understand
their own fertility and, if they do choose to have sex, I want them to
understand how they can best prevent pregnancy while being sexually active.
However, once pregnancy has
happened, once there’s already a new human organism in the picture, it changes
everything. I think the people whose actions created that new life should be responsible
for its protection.
Of course, many people
disagree. Abortion rights advocates place reproductive freedom over protecting the
lives we create, at least when it comes to women and pregnancy. How would this
mentality look if they also applied it to men and child support? Hales has an
idea:
“A man has the moral right
to decide not to become a father (in the social, nonbiological sense) during
the time that the woman he has impregnated may permissibly abort. He can make a
unilateral decision whether to refuse fatherhood, and is not morally obliged to
consult with the mother or any other person before reaching a decision.
Moreover, neither the mother nor any other person can veto or override a man’s
decision about becoming a father. He has first and last say about what he does
with his life in this regard.”
(And if we’re being really
consistent, he doesn’t have to inform the woman he impregnated, or anyone else,
about his decision to refuse fatherhood.)
It seems to me that consistency
requires abortion rights advocates to argue for the man’s right to choose as well as the woman’s:
the pro-choice mentality means that, as women can “walk away”
from their pregnancies, men should be able to walk away from the women
they have impregnated.


Not very uplifting, is it?


Or we could strive for a different kind of consistency–the kind that holds both men and women to a higher standard. This is why I’m for child support laws, and this is why I’m against abortion.

Portland will provide bereavement leave after miscarriage and abortion.

Planned Parenthood wants you to get out and vote!
347 replies

A letter from our president

A Response to the Spectrum Argument
Scroll to top