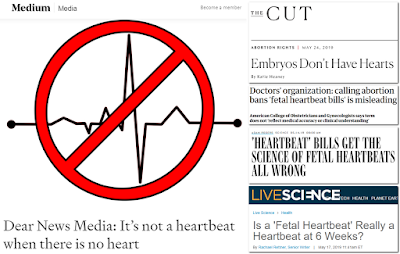 Definitions of “heartbeat.”
To my knowledge there’s no unifying authoritative definition of “heartbeat.” Embryology textbooks do use the term. For example:

“Blood flow begins during the fourth week, and heartbeats can be visualized by Doppler ultrasonography.” – The Developing Human, Moore et al, 10th Edition (2013)

“The heartbeat is initiated around the twenty-first day, and its continual beating is required for normal heart development.” – Larsen’s Human Embryology, Schoenwolf et al, 5th Edition (2015)

But in neither case do they explicitly define the word “heartbeat.” Merriam Webster defines the term as “one complete pulsation of the heart.” Mosby’s Dictionary of Medicine, Nursing & Health Professions (9th Edition) defines “heartbeat” as “a complete cycle of cardiac muscle contraction and relaxation.” By these definitions the embryo does have a heartbeat from approximately 3-4 weeks postfertilization/5-6 weeks LMP onward.

The embryonic heart.
As we explained in more detail here, by 4 weeks postfertilization/6 weeks LMP, the embryo’s heart is beating as it uses coordinated muscle contractions to unidirectionally pump blood, exchanging well-oxygenated blood from the chorionic sac with poorly oxygenated blood from the embryo’s body via multiple paired veins. The heart has also started partitioning into four chambers (atria and ventricles), which are observable by 5 weeks postfertilization/7 weeks LMP.

All of this information is taken directly from the embryology textbook The Developing Human by Moore et al, 10th Edition, 2013. Keep these facts in mind as you read the descriptions below.

Vague and evasive articles.
A number of outlets have run articles quoting pro-choice medical professionals making at best misleading and at worst flatly false claims about the embryonic heart. As we go over these articles, please notice the following themes:

1) None of these articles specifically define “heartbeat.” Most just describe the embryonic heart in markedly vague terms and then declare its activity doesn’t qualify as a heartbeat without explaining why not.


2) Nearly all the articles quote medical professionals directly working for or affiliated with abortion rights advocacy groups, but generally the articles omit mention of these affiliations (the exception being Jezebel, which is refreshingly upfront).

Anti-Abortion Extremists Are Controlling the Narrative on ‘Heartbeat Bills’ Jezebel, 6/5/19

Is a ‘Fetal Heartbeat’ Really a Heartbeat at 6 Weeks? LiveScience, 5/17/19
‘Heartbeat’ Bills Get the Science of Fetal Heartbeats All Wrong, Wired, 5/14/19
Euphemism list:
Further Reading:

Objections to Biological Humanity from Fertilization

When we say “heartbeat” we don’t mean “fetal pole cardiac...