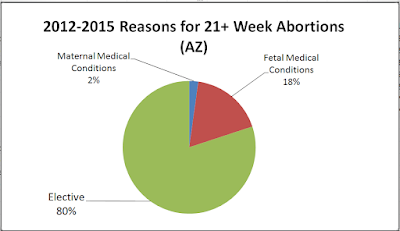 Two months ago I wrote the post “No, most late-term abortions are not medically necessary,” in which I used Guttmacher data to show that at least 75%
of 13+ week abortions are elective (that is, they are not performed due to fetal or maternal health concerns).
I said:

One could argue that the proportion of medically necessary
abortions after 16 weeks would be higher. And it probably would be. However
there’s no indication it would be so high as to constitute even a majority of
late-term abortions, much less “nearly all” late-term abortions.

[Numbers pulled from the reports]
So at least in Arizona, no, the proportion of medically necessary abortions did not increase later in the pregnancy compared to the data from Guttmacher.
Similarly I found some Florida data. Unfortunately they lump together 13-24 weeks. They also have some pretty broad definitions of “non-elective.” In addition to life endangering conditions to the mother and serious fetal medical conditions, Florida considers abortions for the following reasons “non-elective””

In Florida, since 2013,
87% of 13-24 week abortions
have been elective.
While this information comes from only two states, the point remains that wherever there is actual data (where states can’t hide behind non-reporting), it’s clear most late-term abortions are not medically necessary. If any pro-choicer has evidence (beyond anecdotes) to suggest otherwise, please bring it forward.

How Common is Infanticide in Abortion Facilities?

Our plans for the anniversary of Roe v. Wade
Scroll to top