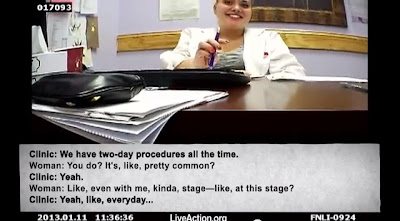 Live Action just released their latest undercover video from a Women’s Health Center in the Bronx. In it, a woman 23 weeks pregnant
questions Health Center employees about what would happen should her child be
born alive. The response is chilling.

One employee tells the pregnant woman that a born-alive
infant would be killed with a toxic solution. Specifically, “it won’t be able to
breathe anymore.” The pregnant woman asks the employee what she should do if
she goes into labor and births her child at home. “Flush it.” Does that sound a
lot like infanticide? If so, that might be because it is infanticide.
Such a matter-of-fact response to a “post-birth abortion”
begs the question: how common is
infanticide? What happened to the “rare” in the pro-choice trinity of “safe,
legal, and rare”? The employee confirms our fears when she gleefully announces
that even late-term abortions are a
“daily” occurrence.

So Live Action’s video suggests employees regularly
encourage mothers to commit infanticide. Are we even surprised? Both pro-choicers
and pro-lifers can see that there’s no
difference between the same child inside or outside the womb. As Nathaniel
wrote in his excellent piece on abortion rhetoric and cognitive dissonance, Gosnell and Abortion, Part 2 of 3:

If killing a fully-developed fetus is acceptable, ultimately
this means killing the same viable infant outside the womb is acceptable.
Combine that with the apparently nonexistent legal oversight, and law-breaking becomes trivial; there goes “legal”.
So we are left with, “safe.” How comforting.
Interestingly, but not surprisingly, the second Health
Center employee bristles when the pregnant woman uses the word “kill.” The
employee uses phrases like “pregnancy tissue” (what, we can’t even say “fetus”
anymore?), “it” (the fetus is definitely a “he” or a “she” at this point), and
“removes the pregnancy” (now that’s just sloppy). She also insists that what’s
really happening is a termination – not a killing –  because life in the womb is
an interpretive concept as opposed to a rigorous, scientifically defined one. I
guess she believes when it comes to fetal development, we should just “teach
the controversy.”
Finally, notice the contrast between the two employees: one employee
is strikingly insensitive, laughing and joking about the child’s limbs coming
out in pieces, or the child suffocating in toxic solution. The other employee
can’t even bring herself to use appropriate terms like “fetus.” The comfortable
acceptance of the first employee is repulsive, but is the second employee’s
discomfort to the point of denial any better?

Todd Akin: Sorry He Was Sorry.

Is “unbiased abortion counseling” a unicorn?