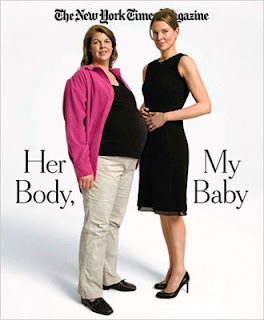 This is a wonderful guest post by Louisa Millington . . .


While at the gym last week, it came to my attention that I had let June almost completely run its course without paying tribute to National Fertility Awareness Month.  I was shaken out of my blissful ignorance when I came across an episode of The View.  In observance of National Fertility Awareness Month, the ladies of The View were dedicating an hour to Surrogacy.  As I watched, and peddled, a question began to develop:  If the surrogate decides to abort, is it still her body, her choice?   As the question continued to brew in my head over the next few days, I happened upon a second occasion to consider the issue of surrogacy while sitting at a book store killing time, waiting for my daughter’s flight to arrive.  While I sat quietly reading, a pregnant Asian woman sat next to me, and within the course of thirty minutes she was joined by five other pregnant women.   I must admit my curiosity got the better of me, and I began to make conversation.   The woman next to me told me she, and the group of women with her, were all from China.  Now having just seen the surrogacy episode of The View, and then finding myself in the company of six pregnant women from China, it got me thinking.  My mind very quickly jumped to the thought that these women could be part of the Chinese “wombs for rent” industry.  While these two surrogacy experiences open up a whole range of questions, I did get the sense that I was being called to explore some of those questions.


I’ll start with my first question:  If a surrogate decides to abort, is it still her body, her choice?   The quick answer is, yes. If you are unfamiliar with surrogacy, it is fairly simple.   There are two basic types of surrogacy, traditional and gestational.   Traditional uses the host surrogate’s egg and either donor sperm or sperm from the intended father to impregnate the host; there is a genetic relationship to the surrogate in traditional surrogacy.  Gestational surrogacy uses either donor sperm and eggs or the sperm and eggs of the intended father and mother to impregnate the host surrogate; there is no genetic relationship to the surrogate in gestational surrogacy.   Most people that choose surrogacy, as opposed to IVF or adoption, do so out of a desire to have a genetic relationship with the child.  There are only six states in the United States that permit surrogacy contracts:  Arkansas, California, Illinois (gestational surrogacy only), Massachusetts, New Jersey (uncompensated surrogacy agreements only), and Washington (uncompensated surrogacy agreements only).   The remaining states have no surrogacy laws, mixed/ambiguous laws, or surrogacy is not legal.  Surrogacy contracts are typically legal contracts where portions of the contracts can be unenforceable, particularly any portion of a contract that would require a surrogate host to continue a pregnancy against her will.   A surrogate mother has the option at any time to continue or end the pregnancy and there is nothing the intended parents can do to change the fact that this is her exclusive right (even with a legal contract).

As I have perused the surrogacy message boards, I have learned that abortion is a hot topic in the surrogacy community.  It can become an issue when selective reduction comes in to play, when the potential for a “defective” child becomes an issue, when a surrogate or intended parents change their mind, or when intended parents become unable to pay their bill.  I’ve read stories of intended parents that have paid tens of thousands of dollars only to have their genetic property arbitrarily destroyed by a surrogate that changed her mind.   These parents weep over their lost child, their lost parenthood, while the surrogate mom exercises her right to privacy.  Imagine the dichotomy of positions.  While many, if not most, of these families are ardent supporters of women’s reproductive rights, these same families lament the loss of their “child”.  So whose property is that growing human?  Many try to sue for performance of contract; however the sad reality is, the child in the womb is chattel owned by the mother carrying him or her.  Many have tried to apply commerce laws, laws applying to the selling of goods and services, to the surrogacy contract; once again a woman’s right to privacy supersedes commerce law in this instance.   I am struck at this point by the offensive objectification of these children, pawns used by surrogates to improve their financial situation and by intended parents attempting to satisfy their desire to have a genetic relationship with a child. This thing, this child, that sees its net worth rising and falling based on human desire and the ability to perform.


Now, what about those six women from China? Once again I was faced with dueling challenges; China’s forced subjugation of women with respect to their ability to have more than one child and the burgeoning womb for rent industry in China.  As I researched, I came across many articles about the Chinese government cracking down on the womb for rent industry, and stories of the Chinese government strapping teenage women to tables as they insert needles into their bellies to begin the abortion process, a situation not unfamiliar to many Chinese women that have been subjected to forced abortions (even when the little ones were intended to remain within their genetic families).  I doubt many of you are asking why Chinese women would be used for surrogates, in case you are, the answer is cheap labor.  The cost of surrogacy with a Chinese or Indian woman ranges from $12,000 to $30,000 compared to the cost of a US surrogate which costs upward of $70,000.  While continuing my research I also learned that many military wives are becoming surrogates in order to supplement pay, particularly those whose husbands are being deployed for long periods of time.  Women, how far have we come to sink so low?  Women of all skin color are selling their fertility to improve their financial situations, allowing themselves to be used as a tool to satisfy their desires and the desires of others. 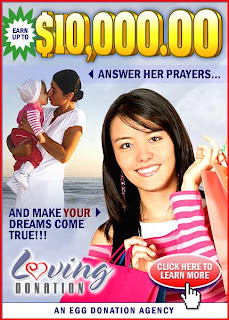 Dare I risk broaching another surrogacy question? What about the risks of In Vitro Fertilization (IVF)?  In order to achieve pregnancy IVF is perfomed.  Drugs are given to an egg donor to hyper stimulate ovary production.   A woman’s pelvic area swells to about twice its normal size and if you think PMS is bad during normal ovulation can you imagine being in the presence of woman whose ovaries have been hyper stimulated, or can you imagine being that woman?  Most women produce only one egg per cycle. Egg donors will produce anywhere from 5-35 eggs.  Did I mention the possible association between IVF and breast and ovarian cancer. Do your own research, check with the National Institute of Health.


In the final analysis, I would say BUYER AND SELLER BEWARE.  There is an overwhelming amount of using and abusing of the human person involved in designing a baby that is genetically related to the intended parents.  In addition to the utilization of the child, it deprives the child of his or her filial relationship with his or her parents and their extended family, it creates a disruption in both the societal role and the obligation of parenting, it creates a disruption to the institution of marriage (the historical purpose of marriage is unity and the pro-creation and raising of children), and creates disorder in the fabric of society.


It’s National Fertility Awareness month.  Be aware of those that are seeking, without success to achieve pregnancy, and be of support in word and in deed. Be knowledgeable of ethical resources for achieving pregnancy such as Natural Family Planning www.NFP.com and NaPro Technology www.NaProTechnology.com. Both have been hugely successful in helping couples struggling with infertility to achieve pregnancy. Not all infertile couples will be open to discussing such an intimate topic, so perhaps providing the couple with written information will be the least intrusive route to take. Most of all, be an informed voice of support and sanity.


Louisa Millington is a proud mom of four children and has been married to her husband Tim for 21 years.  She has spent her adult life in service to Life & Dignity issues.  In 1994, with her husband and a small group of people from the Lake Arrowhead area, Louisa opened Veronica’s Maternity Home.  Hundreds of children have been born out of Veronica’s Home and hundreds of women have changed their lives through the housing, education, life training, and love provided by Veronica’s Home.  In 1996 Louisa began to work with the Respect Life Office of the Diocese of San Bernardino and since then has been fortunate to work on legislative issues and projects on a local, state and national level.  She considers herself blessed to have had so many opportunities to serve and equally blessed by the friends and acquaintances she has made along the way.

The Rise of Pro-Life Atheism