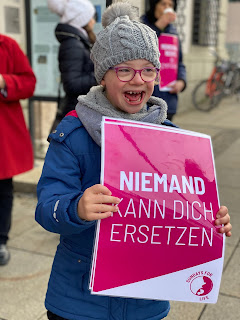 
In Germany, abortion is generally illegal under Section 218 of the criminal code. The only exceptions are the so-called “medical indication” (danger to the life of or the threat of grave impairment to the pregnant woman’s physical or mental health” as well as “criminal indication” (the termination of pregnancies which are the result of rape or incest).

The “medical indication” abortions are almost exclusively abortions because of disabilities of the child: almost 4.000 cases a year.

The German Federal Constitutional Court has ruled twice that even pre-born children have human dignity and the right to life.
Unfortunately, that said, there are over 100,000 abortions in Germany every year. That means 6.1 abortions per 1,000 women aged 15-44 (compared to 13.5 in the United States).

The vast majority of abortions (96%) are performed illegally. Those are abortions that are not indication-based, but instead based on a landmark decision of the Constitutional Court. In 1993, it decided that it is not possible to protect the unborn child without their mothers. To dissuade women from choosing an abortion, all participants go unpunished if:

These abortions are still illegal, but they are not punished. They are provided by doctors and abortion facilities.

This ruling created a strange situation, where it says that abortions are generally wrong because every human has dignity and the right to life and, at the same time, opened the door for technically illegal but practically legal abortions.

The state acknowledges that abortions are a problem and says that we need to reduce the number of abortions, but does not do anything to actually achieve this goal.

For example, the federal republic of Germany publishes a roughly 300-page annual report on the condition of the forests in Germany, including proposals on how to improve the situation.
There is no such thing for abortions. In a way, a German tree enjoys better protection than a pre-born child.

Even though the counselor is required to write a report of the counseling, it does not include, for example, the reasons stated for wanting an abortion (the woman is not obliged to say a single word during the counseling). With this crucial information missing, there is no way to remove the reasons for an abortion.
The counseling is – at least according to the law – required to persuade the woman to carry her child to term. In practice, however, counseling is geared to an “open outcome” and can even be performed on the phone.
Over 100,000 children aborted every year is an astronomical amount. The number of unreported cases might be much higher, though.

Doctors are obliged to report the numbers of abortions performed but are not financially compensated for this work – meaning no incentive to actually report correct numbers. It also doesn’t account for mothers who travel to neighboring countries for their abortions.

German society views the topic of abortion with hesitation, with the majority seemingly being personally pro-life but politically pro-choice. But most people will not talk about the issue, even in family circles. It is considered to be something taboo.

Most people do see there being something wrong with abortion but are too afraid to go against the mainstream view and not knowledgeable enough to actually form a well-informed decision.
Even the majority of people who firmly believe that abortion is wrong under all circumstances are often too afraid to leave their comfort zone and to engage in debates on the issue, mostly out of fear of being seen as anti-women.

Unfortunately, here as in many countries, abortion is almost seen as a more “humane” way of dealing with an unwanted pregnancy. An adoption is seldom an option for many of these women because it is seen as being more emotionally damaging for the mother than the abortion. Five to ten times as many couples are waiting to adopt, as children up for adoption exist.
One of the leading groups that are openly fighting for abortion is the “Coalition for Sexual Autonomy.” Among other things they call for unrestricted access to legal abortion up to birth, mandatory teaching of abortion procedures during medical school, and elimination of Section 219a of the criminal code which prohibits the promotion of abortion for financial gain. These people find it necessary to scream, insult, and disrupt any pro-life event; they have even stalked pro-life activists, vandalized churches, destroyed pro-life counseling offices, and set cars on fire.
In the face of this hostile situation towards life-affirming institutions, my wife and I decided to start a pro-life non-profit to break the taboo, inform the general public and do general public relations/marketing for the pro-life message. The name of our organization is Sundays for Life. We have taken to being incredibly blunt in our presence in the downtown of our city. Our color is fuchsia pink, and the banner and signs are hard to miss. We want people to leave their comfort zone. Because let’s face it: death is not comfortable, especially not the deaths of millions of babies.
Over the last few weeks, we have taken to Facebook, Instagram, and YouTube. We have shared two of the many videos we hope to produce.
The videos that we created are personal stories of people affected by abortion: one woman’s crisis pregnancy and how she chose life for her child, and a man’s account of his role in his wife’s abortion.
These personal testimonies are virtually non-existent here in Germany and Europe in general, and we hope to reach people by these captivating, challenging, and personal stories.
So far, we have reached thousands with our videos, and there are more videos to come soon.

We want to engage the general public on social media with humorous and thought-provoking content. We want debates to take place. Because when people talk about abortion, they have to think about abortion.

Forced Abortions Around the World
0 replies

Pro-life work while sheltering in place
Scroll to top