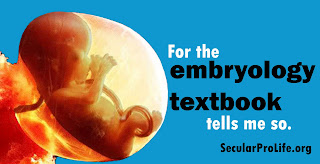 The Barna Group has released the results of a poll of 1001 American adults which correlates religious adherence and position on abortion.

Among evangelical Christians, 78% believe that the practice should be illegal in all or most cases.

On the other hand, 72% of atheists and agnostics support keeping most or all abortions legal.

Those faith segments that prefer keeping abortion legal were self-identified Christians who are not born again (54% legal versus 31% illegal), Catholics (53% versus 36%), mainline Protestants (53% versus 40%), and faiths other than Christianity (54% versus 42%).

Surveys that simply ask “What is your religion?” and “Where do you stand on legalized abortion?” are not particularly helpful. They do not tell us anything about why people stand where they do. We simply assume that people are following their religious doctrine on the subject. Given that the Catholic Church is not shy about its pro-life stance, but 53% of Catholics apparently support legalized abortion, we should question that assumption. (Alternatively, perhaps this survey just got a bad sample. It happens.)

Our own preliminary research indicates that pro-lifers of all religious stripes tend to explain their stance in secular and scientific ways. (We’d like to do more extensive research in this area, but the project has been postponed indefinitely due to lack of funds.) I don’t deny the correlation between pro-life activism and church attendance, but I do not think it is so simple as “I go to church, I hear my pastor say that God is against abortion, I become pro-life.” Instead, I think that churches provide a strong infrastructure for activism and outreach. Christian pro-lifers have a natural community in which they can gather and support one another. Atheists and agnostics lack that infrastructure.

That is why SecularProLife.org’s work is so important. We are finally beginning to provide that desperately needed infrastructure and community. I cannot tell you how many messages I have gotten from non-religious pro-lifers thanking us for showing that they are not alone.

It is a shame that only 28% of atheists and agnostics took a pro-life stance in this poll. There may be more who would self-identify as pro-life but didn’t show up because they belong to the “Roe is what it is, so let’s change hearts and minds” school of thought. But even accounting for them, the numbers are depressing. Outreach to atheists and agnostics is crucial to the survival of the pro-life movement– and ultimately, the survival of babies. There is nothing wrong with being a pro-life evangelical, but we must all do our part to ensure that non-Christians are welcomed.

Please take a look at our religious diversity guide. (Print double-sided, then fold in the middle.) Although it is geared toward campus organizations, it contains tips that any group can use.

The religious diversity of the pro-life movement