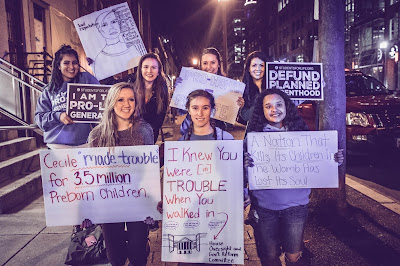 Cecile Richards recently came out with a ghostwritten memoir, Make Trouble, that glamorizes her role at the helm of the nation’s largest abortion chain, Planned Parenthood. Pro-life advocates are peacefully protesting outside every stop on her book tour to ensure that her faux feminist narrative does not go unchallenged.

Students for Life of America volunteers are distributing an excellent pamphlet, “Getting Into Trouble,” that summarizes Planned Parenthood scandals you won’t find in the book—including Medicaid fraud in Texas (“Charging taxpayers for contraceptives for patients who were already sterilized seemed like a good idea at the time”), Planned Parenthood’s support of disability-based and race-based abortions, and the precipitous drop in prenatal care services during Richards’ tenure.

At her Washington, D.C. stop, Richards was also greeted with tongue-in-cheek references to Taylor Swift’s “I Knew You Were Trouble.”

This Wednesday, Richards’ book tour takes her to San Francisco, where Pro-Life San Francisco (led by SPL’s own Terrisa Bukovinac) will rally in opposition outside the Norse Theater beginning at 7:00 p.m. local time.

The remaining stops on the book tour are:

We encourage pro-life advocates in each of those regions to peacefully protest those locations in memory of the more than 3.5 million lives snuffed out by Planned Parenthood during Richards’ term as its CEO.

Richards announced her resignation from Planned Parenthood in January, but her replacement has not yet been named. Former Texas legislator Wendy Davis, infamous for her unsuccessful filibuster of abortion safety regulations, is rumored to be in the running.

Three Excellent Reasons Not to Execute Women Who Have Abortions