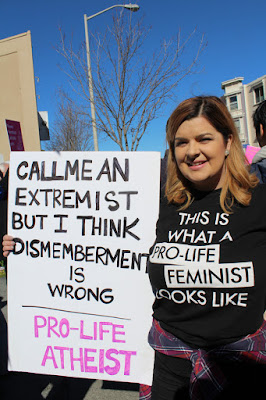 On Saturday February 11, 2017, pro-lifers gathered at Planned Parenthood locations across the country to call upon legislators to strip the organization of its federal funding and reallocate those funds to federally qualified health care centers.

When I first arrived on the scene it was about 45 minutes before the event was scheduled to start.  Only one of my fellow pro-life organizers was present at the time and there were about 50 counter protesters present.  The group saw me immediately as I turned the corner to proceed down the street to the protest site.  I was wearing a shirt that said “This is what a pro-life feminist looks like” and carrying a large sign with the SPL slogan “Call me an extremist, but I think dismemberment is wrong” along with “pro-life atheist”.  It easily attracted shouts from the other side.  One guy screamed “There’s no such thing as a pro-life feminist”, to which I replied “We exist”! Both sides were fenced off and separated by a couple of yards. There a woman that wanted to talk to me immediately, but the police asked us to stay on separate sides or go beyond the zoned area.  We walked over to the side and had a conversation mostly about all of our common ground (while Planned Parenthood supporters circled us in an attempt to conceal my messaging).  She was surprised to learn that surgical abortions took place in that facility, but was generally concerned about ensuring women had access to health care.  Another woman wanted to have a more public conversation from our respective sides of the barrier.  We established a great deal of common ground, but again differed on how to achieve equality.

By this time the crowd is growing on both sides.  While we had about 50 participants on our side, there were easily more than 200 present for the counter protest.  They shouted as a group chants like “my  body, my choice”, to which we responded with “not your body, not your choice”, they said “pro-life you’re the killers, we remember Dr. Tiller” we said, “we remember Gosnell”.  We also chanted “equality, nonviolence, and non-discrimination”, “love them both”, “pro-peace, pro-life”, among other things. 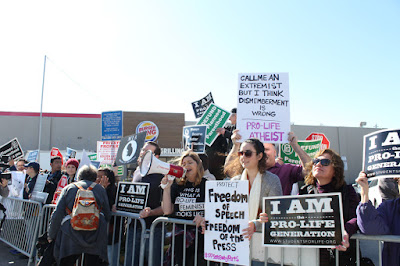 There was (amazingly!) a large media presence, and anytime the media attempted to take a picture of someone holding pro-life messaging, the counter protesters would move in and attempt to conceal the messaging with their own.  One man yelled pretty consistently directly to me “KKK go home!” while others said “San Francisco stands with us”! To which we replied “We are San Francisco”!  Pedestrians passed by waiving $20 bills (many while giving us the middle finger) and then entered the clinic to make a donation.  The counter protesters responded to this with “you’re helping us raise lots of money, you have to admit it’s kind of funny”. We think they won’t be laughing when we defund Planned Parenthood entirely.
Overall, it was intense to say the least.  I did several local media interviews, and had some great interactions. We definitely broke some stereotypes.  It was exhilarating to see such a sizable counter protest and I think it’s an indication that the pro-choice side is done ignoring us.  We are a real threat now, and once we successfully defund Planned Parenthood, and get abortion money out of the political system, hopefully then we will be able to have an honest discussion in this country about abortion.

Could PP ever deserve taxpayer funding?

Put your money where your mouth is
0 replies

TOMORROW: #ProtestPP across the nation!