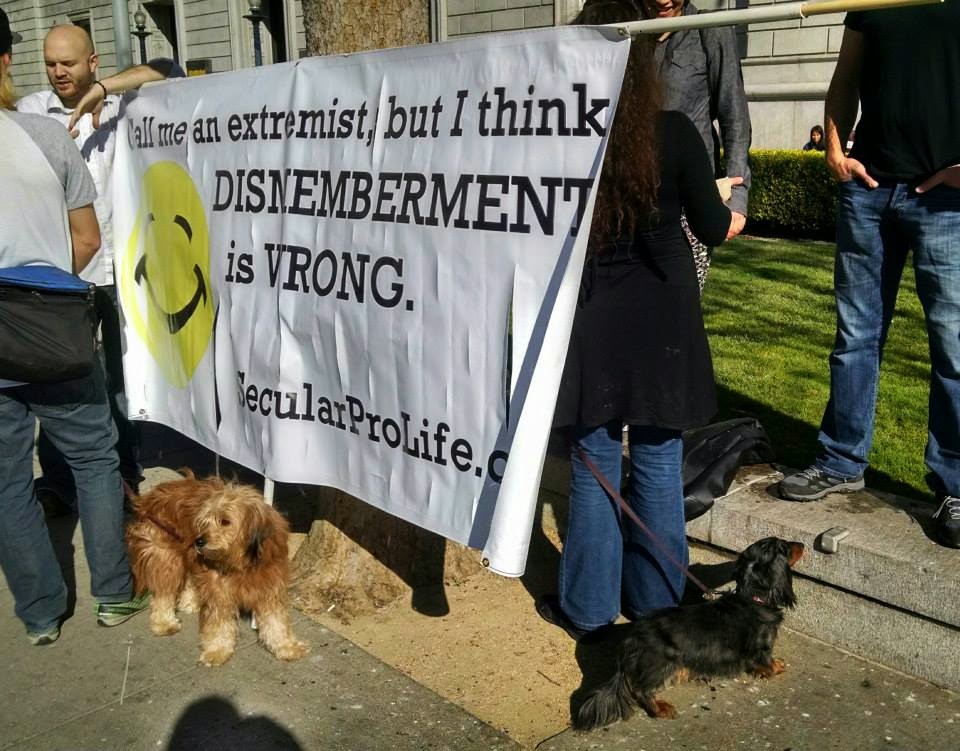 Last
Saturday fellow SPL supporters and I marched in the West Coast Walk for Life through
downtown San Francisco. To be blunt, I was not sure I was looking forward to
it. I’ve done many SF Walks over the years, but this is the first year I was
going to attempt one while 8 months pregnant. The very idea of the Walk seemed
kind of exhausting. On the other hand, the Walk is a chance to see friends of
mine in person who I usually only get to talk to online, so there was that to
look forward to. I decided to just try to do the whole Walk, and if it got too
difficult I could always head home early.
SPL
supporters gathered at our banner in front of the Asian Art Museum as the San
Francisco rally began. We had a few people stop and tell us they like the
banner, and we even had a few people tell us they liked SPL’s speech last year!
I was impressed and happy they still remembered.
Once the
rally started wrapping up we easily slipped into the embarking crowd near the
front of what always ends up being a massively long column of people trailing
down Market Street in San Francisco. Most years I like to dart in and out of
the crowd getting as many pictures of the different signs as possible. No
darting for me this year. Luckily pro-life atheist and amateur photographer
Ellen took on the role enthusiastically. I wish I had pictures of her taking
pictures—she even climbed up on subway walls and other places to get better
vantage points.
Meanwhile I
walked alongside our banner and talked with Josh Brahm about the Walk, the
effects of these kinds of pro-life events on people, and which signs we liked
(or didn’t). With so many people milling down the street, the Walk moved at a
place slow enough that I was able to keep up for the duration, which is nice.
I was
surprised at how few counter-protesters we saw. There were two or three here or
there along the route, but most years there’s eventually a concentrated crowd
of several dozen, usually with bullhorns and chants and plenty of signs that
make for interesting photos. This year we saw none of that. When we got to the
very end of the route there was a slightly larger group, but they seemed small
compared to the thousands of pro-lifers overflowing from the street to the
surrounding park and blocks around it. I think the counter-protesters’ message
was largely missed by most on our side because of that. Not sure why they took
that tactic this year. I think the only other year I’ve seen so few
counter-protesters at the Walk was a year it was raining. Not sure what to make
of that.
I found out
later that some of the counter-protesters who were around had tried to physically block the Walk, but we never
knew about it at the time. Apparently the police (and many student groups led
by SFLA) made short work of those efforts (fast forward to about 3m50s to see the police stop people from blocking the street)—the counter-protesters didn’t even
slow the column down enough for us to notice a pause. Ha.

After the
Walk, several of the SPL supporters met up for pizza and card games and general
fun, and it was great to get to hang out with everyone. I can only imagine what
my life would be like if all my online friends lived in the same area. Ah well.
The next day
was the West Coast SFLA conference. Ellen and I, along with pro-life atheist
and SPLer Terrisa, arrived around 7:30am and set up SPL’s table. We were right
between the tables for Life Matters Journal and Equal Rights Institute (two
pro-life groups I consider good friends of SPL).

We spent the day encouraging
student groups to take one of our outreach packets, which contain brochures
about why the pro-life positions is of interest to non-Christians and copies of
our 10 Ways to Be Inclusive blog post.

We had a lot of great conversations with
people interested in SPL. So many people tell us how happy or relieved they are
to see secularists join the fold and how frustrated they get when people
dismiss their views because of religion. Several people told us they think SPL
and groups like ours are the key to the future of the movement! And one gentleman
in particular told me that, in his conversations about abortion, just being
able to point to SPL’s existence has helped make people more open to
what he’s saying. It is so encouraging
to hear how SPL is helping the pro-life movement in little ways we never
even know about!

During the
day we also got to talk with people who are leaders in their own pro-life
organizations. Of course we talked a lot with our tabling neighbors, Life
Matters Journal and Equal Rights Institute. We also got to chat with leaders from
the Walk for Life, Feminists for Life, Priests for Life, And Then There Were
None, 40 Days for Life, Students for Life (of course!) and many others. And we
talked with a lot of students from different high school and college pro-life
groups. Some of the schools that have had SPL for speaking engagements in the
last year came over to say hi, and that was really sweet.
Throughout
the day I took a few notes on good ideas other groups had for making their
tables interesting and engaging (for example, candy doesn’t hurt). I think next
year I’d like to have more copies of some of our blog posts printed as
leaflets. Which blog posts do you think would be most useful for a student
pro-life conference?
Overall it
was a busy and enjoyable weekend. So good to see so many friends, get
brainstorming ideas, and remember how many different kinds of people are interested
in pro-life work. If you can make it to either a march or a conference (or
both) I highly recommend it. Very thought-provoking and encouraging.

SecularProLife.org featured in the Princeton Tory

March with us in January

“When the unborn baby is no longer unborn.”

Irony at the March for Life counter-protest