Who’s Melissa Ohden? I’m so glad you asked. Melissa is a public speaker who lives in Missouri with her husband and two daughters. And when she was 31 weeks old, she was born prematurely after an abortionist injected poisonous saline solution into her mother’s womb. Melissa survived and was adopted by another family, but has since reconnected with her biological relatives and learned more about the unusual circumstances of her birth.1

Her medical records state: “Saline infusion for an abortion was done but was unsuccessful.” 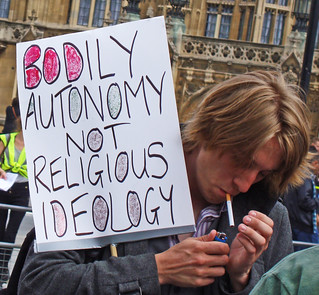 Unsuccessful? But the abortionist managed to “disconnect” Melissa’s mother from the baby that was using her body. Melissa’s mother’s bodily autonomy was completely vindicated! Isn’t that what abortion is all about? Why is this called “unsuccessful”?

This came to the forefront in the debate about the Born-Alive Infant Protection Act (BAIPA). I realize that many pro-choicers (namely, the ones who aren’t completely heartless) supported BAIPA. But if the pro-choice movement as a whole were truly committed to the idea of bodily autonomy as the rationale for abortion, there wouldn’t have been a debate on BAIPA.

The main point of BAIPA, as expressed in the legislative findings, was to “repudiate the flawed notion that the right to an abortion means the right to a dead baby.” But that “flawed notion” is very much alive within the abortion movement. An abortion advocate may argue passionately for the abstract ideal of “bodily autonomy,” but the moment they refer to a live birth as a “failed abortion,” their real position is exposed.

1. Although survival of abortion is uncommon, Melissa is far from being the only one. I’m only using her story as an example because I happen to know her personally.

Aborting to protect our bodies?

“Fewer rights than a corpse!” rebutted

A Critique of Judith Jarvis Thomson’s A Defense of Abortion, Part II

The Case of the Imaginary Violinist
183 replies

Another Aspect of Persuasive Dialogue

How I see the abortion debate now that I’m pregnant.
Scroll to top