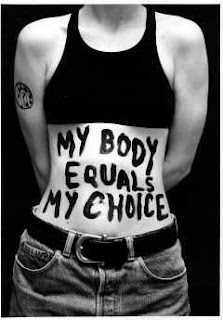 In my opinion, bodily integrity—the idea that no person has the right to use another person’s body against their will–is the strongest pro-choice argument.

“For a society which respects the rights of one individual, to sink its teeth into the jugular vein or neck of one of its members and suck from it sustenance for another member, is revolting to our hard-wrought concepts of jurisprudence. Forcible extraction of living body tissue causes revulsion to the judicial mind.”

Judith Jarvis Thomson tackles the issues of bodily integrity and moral obligations in her essay, “A Defense of Abortion.”  Thomson asks us to imagine a famous violinist with a fatal kidney ailment.  One day a bunch of music lovers kidnap you and hook your kidneys up to the violinist’s circulatory system.  In nine months the violinist will have recovered, but if you disconnect yourself prematurely the violinist will die.  Thomson asks, “Is it morally incumbent on you to accede to this situation?”
I’ve often seen car crashes used as another analogy.  When you drive (have sex), you know there’s a possibility you could crash into someone (conceive).  Even when you drive very cautiously (use contraception), there is still a chance of a car accident.  Should you be in a car crash in which the victim’s life is at stake, the law does not compel you to donate blood or organs to save the victim. While it would be admirable for you to donate, you are not required to do so.
These analogies attempt to illustrate not only the importance of bodily integrity, but that bodily integrity is so essential it cannot be usurped by even the morally and physically complex circumstances of pregnancy.  Yet in the context of abortion each of the above examples fails to account for one or more of the following important factors:
1)   Roughly 99% of abortions are performed for pregnancies in which sex was consensual. Two people willingly participated in an action that carried the risk of making another life dependent on the woman’s body.  This is distinct from being kidnapped and forcibly attached to someone. How would Thomson’s thought experiment change if you caused the violinist’s kidney ailment, connected your kidneys to his circulatory system, and then wanted to unplug?
2)   Once pregnant, the woman is already donating her body to the fetus.  It is not a question of whether she can be compelled to donate, but whether she can rescind the donation.  This may seem a meaningless distinction until we reconsider Shimp v. McFall.  How would the Court react if Shimp had already donated bone marrow to McFall and now wanted to have it back?
3)   Unintended pregnancies occur at a far greater rate than comparable bodily donation situations. About 1-9% of women who use birth control pills and 2-18% of couples who use condoms experience unplanned pregnancies. Even the most effective form of female sterilization has a 0.3% chance of an unplanned pregnancy.  For those of us who drive daily, that’s the equivalent of causing at least one life-threatening car crash every year.
4)   For most of the pregnancy, the expectant mother is the only person who can keep the fetus alive.  Imagine if our country had no infrastructure of blood banks and organ donors.  Imagine that, during your annual life-threatening car crash, you were the only person who could save the life of whomever you’d hit.  I doubt our laws would be unaffected by such frequent, extreme situations.
And none of this even touches on the particular circumstances of parental responsibility.
I know analogies are not meant to exactly mirror the circumstances they represent, and yet here I’ve spent a blog post nitpicking analogies.  But that’s sort of the point, isn’t it?  While bodily integrity is an important right, the frequency, physical circumstances, and moral implications of pregnancy are so unique that even in deciding Roe v.Wade, the Court specifically avoided using bodily integrity as a basis for its reasoning:

“…appellant and some amici argue that the woman’s right is absolute and that she is entitled to terminate her pregnancy at whatever time, in whatever way, and for whatever reason she alone chooses. With this we do not agree. … In fact, it is not clear to us that the claim asserted by some amici that one has an unlimited right to do with one’s body as one pleases bears a close relationship to the right of privacy previously articulated in the Court’s decisions. The Court has refused to recognize an unlimited right of this kind in the past.”

I empathize with people who find abortion troubling but find an incursion on bodily rights at least as troubling.  Bodily integrity should not be debated trivially.  However, given the millions of times a year people willingly take the risk that someone’s life will depend exclusively on their bodies, and given the hundreds of thousands of times a year that risk becomes a reality, these circumstances are anything but trivial. 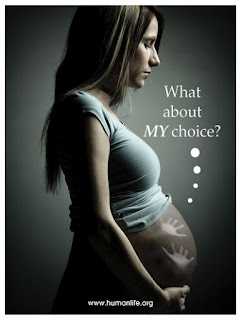 A Critique of Judith Jarvis Thomson’s A Defense of Abortion, Part II

Five years later, 96% of women denied abortion no longer wish they could have had one. (Turnaway Study)