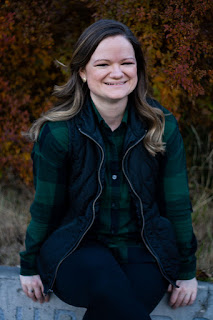 How did you originally get involved in pro-life work? What did that look like?

My first real foray into pro-life work was with Save the Storks, where I worked for five years. Weeks into starting that job in 2013, the Kermit Gosnell trial started and I was heartbroken that any woman who walked into his office didn’t immediately walk out. I was so burdened by the desperation and loneliness they must have felt to keep walking into the filth of his clinic and I realized the need for compassion towards the woman in the pro-life movement. It’s something I’ve been passionate about ever since.

There really doesn’t seem to be much debate here. I think most people are uninformed that there are NO restrictions on abortion here; I didn’t realize that until I had already lived here a few years. It’s unthinkable and my guess is most people just don’t think about it.

In relation to Prop 115, there was never a chance for honest debate and conversation because the opposition outspent us 15:1 and centered all of their messaging around three main lies: (1) Prop 115 is a ban on abortion (no mention of late-term abortion); (2) Prop 115 has no exception for the life of the mother (this was blatantly false); and (3) Prop 115 is intentionally confusing (it was the least confusing issue on the state ballot this year). Without adequate money to fight back against the nonstop lies in television ads, radio ads, and social media, it quickly became a losing battle.

What made you decide to create Colorado for Life?

For the last couple of years, I’ve grown more and more frustrated that Colorado doesn’t have any restrictions on abortion. I watched during our last legislative session two pro-life bills get sent to the kill committee where the pro-life side overwhelmingly brought more witnesses to testify on their behalf and they still got shot down. I attended a political grassroots training event earlier this year, hoping to change the abortion policies in our state. I met two other people at the event who were passionate about this issue as well, and after a few months of meeting together, we started Colorado for Life this summer.

Do you work with other Colorado pro-life groups? If so, what does that entail?

We’re new, and while we each individually engaged with Prop 115 as much as possible, Colorado for Life (as a 501c4) was not able to officially advocate for Prop 115 since it was a ballot initiative. Since we just started this summer, we haven’t had a chance to officially work with other groups yet, but we certainly will as long as the groups remain committed to the same goal of promoting pro-life policies in Colorado.

How was Colorado for Life involved in Prop 115?

While CFL was not officially able to be involved in Prop 115, the other co-founders and I set up an Issues Committee to be able to help. I was involved in some of the early efforts last fall, helping get emails out, posting to social media, and also collecting signatures to get it on the ballot. Our Issues Committee (End Birthday Abortions) raised money in the last few months to help promote it and spread the word about Prop 115.

Quite a few Secular Pro-Life supporters in Colorado say that Prop 115 didn’t pass because of relative lack of promotion and because the other side outspent pro-life advocates astronomically. What are the best ways to remedy these problems next time?

In a state like Colorado, it will be hard to pass ballot initiatives. They are a risky strategy for a few reasons:

(1) They involve educating a large number of people. Because this is already a polarizing issue and most people don’t understand it, it’s very difficult to do that in our sound-byte marketing age.

(2) Fundraising for ballot initiatives is hard. Part of the reason for this is 501c4 organizations can’t promote or lobby against ballot initiatives; Issue Committees must be set up to do that. And ICs are required to collect personal information from their donors (like employment status and employer) once they raise over $5,000 and disclose that information on the Colorado Secretary of State website. Many people who would be willing to donate large sums of money are hesitant to do so because of the rise of doxxing and other aggressive tactics used by the left in recent years.

I don’t believe ballot initiatives are the way to go in a state that has so far to go to enact any kind of abortion restriction. They’re much easier to pass in Louisiana or other states that have already done a lot of legislative work to move the needle.

If a Colorado resident wants to get involved in pro-life work for the first time, what would you recommend?

There are a few things I’d recommended. Locally, support your pregnancy center. They don’t receive government funding and are up against the same misinformation campaigns Prop 115 faced. They need funding to reach women with advertising who are now looking for the abortion pill online and may not ever hear about a pregnancy center without seeing ads. And ads are expensive. You can also support your center by volunteering and donating baby/maternity supplies.

Statewide, join Colorado for Life. We’re raising money to combat the abortion industry in Colorado and have a two-pronged approach: Education and Mobilization. We’re working to educate Coloradans about just how bad things are here when it comes to abortion, and are also mobilizing Coloradans to engage in politics to do something about it. By joining our email list, people can learn about opportunities to act as they come up and we’ll keep people informed on what’s happening during the legislation session on issues that relate to life. To change the situation here, we need people engaged all the time, not just for a short stint to try to get a ballot initiative passed. We believe the lives of the unborn and the well-being of their mothers are worth that investment of time and energy.