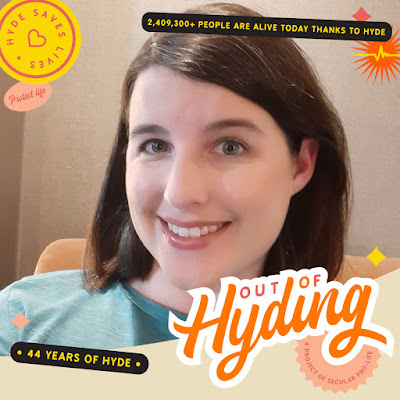 On Wednesday evening, Secular Pro-Life founder and president Kelsey Hazzard spoke at the Out of Hyding virtual rally to celebrate the 44th anniversary of the Hyde Amendment. Many thanks to all who attended! What follows are her prepared remarks. It’s possible she deviated from them a bit. The rally was recorded and you can watch the full presentation here.

Thank you so much. As Terrisa said, my name is Kelsey Hazzard and I am the founder and president of Secular Pro-Life. We are so excited to present Out of Hyding, and even though I wish I could be with everyone in person, I’m thrilled to have you all join us virtually.

Tonight’s speaking lineup centers the people who have benefitted the most from the Hyde Amendment, and that’s Medicaid kids and their parents. I know you are eager to hear their personal stories. I am not a Medicaid kid, but I am a lawyer, so my role tonight is to offer a brief overview of the legal history, to give some context to those personal stories for those in the audience who may not be as familiar with the Hyde Amendment.

Let’s start with the name, the Hyde Amendment. Why is it called that? Well, Hyde is for Henry Hyde, the Illinois Congressman who first introduced it in 1976. That’s simple enough. But why the Hyde Amendment? Why not the Hyde Act or the Hyde Law?

That’s because the Hyde Amendment is not a stand-alone law. It’s actually a rider to the federal budget. Every time Congress has passed a budget, every year since 1976, the Hyde Amendment has been tacked on with bipartisan support. And what the Hyde Amendment does is limit federal taxpayer funding of abortions through the Medicaid program. Here’s our annual budget, here’s the money going to Medicaid, and you can’t put that toward elective abortions. So if a pregnant mother is on Medicaid, it will cover her medical expenses to give birth to the child, but Medicaid will not pay to kill the child in an abortion. That’s the Hyde Amendment in a nutshell.

You might have heard of the No Taxpayer Funding for Abortion Act. That’s a bill to codify the Hyde Amendment, essentially make it permanent, so we wouldn’t have to go through the budget rider process every time. Unfortunately, the No Taxpayer Funding for Abortion Act is only proposed legislation; it passed the House a few times back when we had a pro-life majority in the House, but it stalled in the Senate and was never signed into law. So we continue to have the annual Hyde Amendment budget vote.

Despite those limitations, the Hyde Amendment may be the pro-life movement’s single greatest accomplishment. Over 2.4 million Americans are alive today because of the Hyde Amendment. That estimate comes courtesy of Dr. New, who will address us later tonight.

Abortion activists filed a lawsuit against the Hyde Amendment shortly after it was first enacted, in a case called Harris v. McRae. They claimed that not using taxpayer funds for abortions was legislating Catholic doctrine in violation of the Establishment Clause. Because what atheist wouldn’t want their hard-earned money to be used to kill unborn babies? (It’s funny because I’m a pro-life atheist.) Thankfully the Supreme Court didn’t buy it, and the Hyde Amendment was upheld.

Ruth Bader Ginsburg was not on the Court at the time, but years later, she had comment about Harris v. McRae. She was surprised by the result, because “Frankly I had thought that at the time Roe was decided, there was concern about population growth and particularly growth in populations that we don’t want to have too many of.” She came under a lot of fire for the eugenicist assumptions underlying that statement – and rightly so; her recent death does not make her immune from criticism. We should never forget that the context of that ugly statement was opposition to the Hyde Amendment.

Tonight we celebrate the growth in populations that some people didn’t want to have too many of. We celebrate Medicaid kids like Gina, and Georgia, and Valeria’s sons, and millions more. We celebrate our neighbors, friends, co-workers, and family members.

And we gird ourselves for battle, because the Hyde Amendment is under threat.

The average cost of an abortion is $508. The 2.4 million people whose deaths were averted by the Hyde Amendment represent a billion dollars in lost revenue to the abortion industry. A billion dollars, with a B. And with the abortion rate plummeting to its lowest level since Roe v. Wade, and abortion centers shutting down left and right, they are clamoring for a government bailout. Pro-abortion extremists are taking over the Democratic Party, and they’ve signaled very clearly that if they gain power in Washington, the years of common ground are over.

It’s our duty to preserve the Hyde Amendment for the next generation. This is life or death for millions of marginalized people. I appreciate all of you coming out of Hyding to show your support tonight. It will take a concerted effort from every last one of us. Thank you.

TONIGHT: “Out of Hyding” Virtual Rally to Support the Hyde Amen...