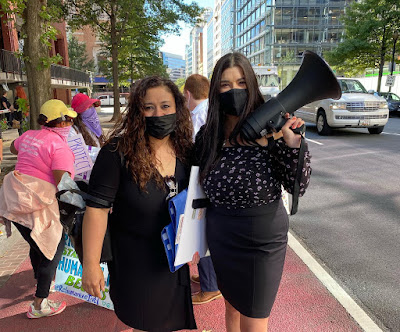 Watch the full live stream of the rally here.

Multiple pro-life organizations rallied outside the offices of the US Attorney General to demand indictment of Planned Parenthood (and its business partners) for fetal organ harvesting and organ trafficking after three years of an open investigation. Signs with messages such as “PP sells body parts” put succinctly their calls for indictment.

Our own Terrisa Bukovinac began the proceedings by calling on AG Barr to indict PP now that even more evidence of PP’s long term practice emerged from the Daleiden trials. Bukovinac noted her FOIA requests to the UCSF for records on fetal harvesting have been significantly delayed: “I shouldn’t have to sue for what the DOJ already has.” She believes actual DOJ prosecution would challenge and inhibit the crime of fetal organ harvesting and trafficking.
Jamie Jeffries of Abortion on Trial spoke on just how common the practice of fetal organ harvesting is, and the perverse incentives it produces on medical providers to encourage abortions. These same providers rarely ask for maternal consent to harvest organs. Jeffries introduced Nicole Atkins, who was injured by an abortion which was altered — without her consent — so that the abortionist could extract her baby’s brain; Atkins spoke on the need to inform women on the “mental, emotional, and physical toll” of abortion, including death, as her sister, Keisha Atkins, died from an abortion. A lack of law enforcement on this practice has real victims.

Rehumanize International likewise called on Barr to begin prosecutions “now,” given the quantity of evidence produced by the graphic conversations recorded by the Center for Medical Progress and by the subsequent trial of the undercover reporter. (Watch Aimee Murphy’s full speech here.) Other speakers pointed out that after two Congressional investigations and FBI inquiries, the foundation for the DOJ to act is well established. One characterized the “harvesting of human organs from victims of violence” as “disgusting.”

Bill Barr can and must prosecute Planned Parenthood for its crimes. There is more than enough evidence for an indictment. Democrats for Life argued that Trump’s election was in large part a pro-life mandate, and many chanted “Bill Barr, do your job!”

The attorney general is the top cop. “When someone traffics in baby parts, we expect the cops.”

The dying gasps of an industry

A Tale of Two Protests

Being pressured to abort? Pro-lifers want to help.

I was a Cuban refugee in the womb. Here’s what the Hyde Amendment means...

When she got a prenatal Down syndrome diagnosis, her doctor wouldn’t stop...
Scroll to top