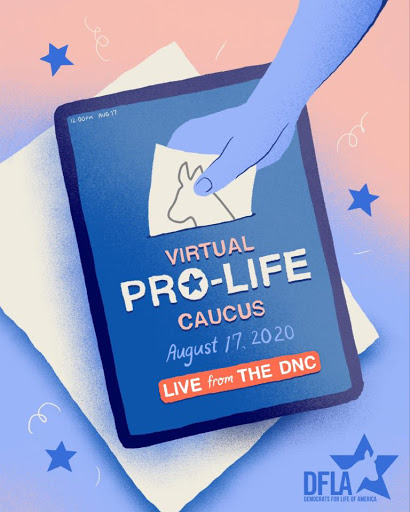 As you have no doubt heard, Joe Biden announced yesterday that Sen. Kamala Harris is the Democratic nominee for Vice President of the United States. The Democratic Party’s pro-abortion policies are bad enough, but the selection of Harris — who, in her previous role as Attorney General of California, pursued a legal vendetta against pro-life journalist David Daleiden (even going so far as to order a baseless raid on his home) — leaves no doubt that Biden has abandoned pro-life voters.

We cannot reward this extremism with silence. It’s more important than ever for left-leaning and moderate pro-lifers to make their voices heard!

Democrats for Life of America (DFLA) is holding a virtual pro-life caucus to coincide with the Democratic National Convention (DNC) on Monday, August 17 beginning at 1:00 p.m. Eastern time.

Are you fed up with abortion extremism in the Democratic Party? Are you left-leaning, moderate, independent, or a Republican who would consider voting Democrat if the Party wasn’t so Pro-Abortion? Are you tired of having your vote taken for granted? You’ve come to the right place!

Join our Executive Director, Kristen Day, DFLA Board Member, Terrisa Bukovinac, and the LEGENDARY Pro-Life Democrat, Louisiana State Rep. Katrina Jackson, (and many more!) for our Pro-Life Caucus hosted LIVE from outside the Democratic National Convention in Milwaukee, WI!

The event is free, but registration is required. Sign up today!