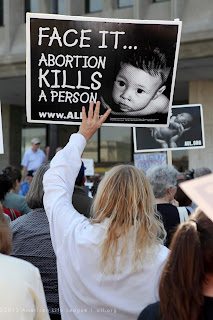 A frequent tactic used by supporters of abortion access to dismiss criticism or scrutiny from opponents is to tell them that if they are so personally opposed to abortion, “just don’t get one.” There’s a deep deception hidden within this dismissive and frankly borderline contemptuous mandate: it deliberately misrepresents the pro-life movement as predicated on a steadfast opposition to the exercise of free choice and free will, as being made up of a group of people seeking only to impose their personal lifestyle choices upon others.

The same argument was used in the 19th century by Southern slave-holders as one of many ways to justify to Northerners the practice of owning another human being. If the North was so against slavery, they didn’t have to allow it in their states, but they were crossing the line by dictating to the South what they could and couldn’t do. Why couldn’t they mind their own business? In both cases, supporters of the practice take to framing the issue as one of personal freedom and preference — of choice — ignoring the real reason for their opponents opposition: that the choice being made infringes upon another’s inherent rights. Supporters of legalized abortion might as well consider next legalizing something unrelated to life or death; how about legalizing theft, and telling those opposed to the infringement of rights represented by taking of another’s property “Don’t like theft? Don’t steal.”

Abortion opponents, like most everyone else, support choice — so long as that choice doesn’t hurt others and violate their rights. Abortion opponents are not on an underhanded mission to strip away agency from women, or thwack everyone across the head with a Bible as is often the portrayal; the pro-life movement consists of people from all religions and no religion, as evidenced by the existence of Secular Pro-Life. Abortion opponents are concerned with the uniform protection of rights regardless of age, size, health, ability, or any other criterion. They reject the legalization and normalization of the denial of rights based on stage of development, holding that unique human life from the moment of conception (that’s right, upon conception a human organism with its own set of DNA is formed) is worthy of protection, and that one’s status as born or unborn is not a determinate of their right to or consequential to the valuation of their life.

The pro-choice movement’s adoption of rhetoric that is intentionally dismissive and ignorant of the true purpose and goal of their opponents is disingenuous and reveals something that they will never, ever admit: they know that they can’t overcome the merits of the true pro-life argument if they are forced to engage on it, so they’ve created a different — and false — one instead

Statement on Norma McCorvey’s Alleged Renunciation of the Right to Li...

Another abortion facility bites the dust!
Scroll to top