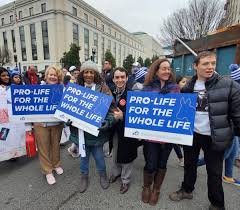 At a town hall in Des Moines on January 26, Kristen Day, the president of Democrats for Life of America, asked Pete Buttigieg whether he would support the Democratic Party platform’s reverting to some language similar to language it had used in 1996 and for several years thereafter. The 1996 platform had contained this:

The Democratic Party is a party of inclusion. We respect the individual conscience of each American on this difficult [abortion] issue, and we welcome all our members to participate at every level of our party.

No Democratic platform in recent years has contained such language, while the Party has moved toward an ever stronger pro-abortion litmus test.

Not surprisingly, Buttigieg evaded the question as if it had been the corona virus. Day’s request was exceedingly reasonable, yet he would risk the wrath of a fearsome abortion lobby if he responded positively. So here is some of the rhetoric that Day’s initial question and persistent follow-up did in fact elicit from Buttigieg:

Here he (irrelevantly to the question, yet to much applause) regurgitates a canned talking point that invokes agreement, and relies on poetic parallelism in order to sound profound. But what does it really mean? In plain prose, it is saying “People differ on the stage of development when killing a baby should be legally impermissible. I think it’s after birth. Instead of concluding that the uncertainty should suggest playing it safe for the party who has most to lose (the baby), let’s arbitrarily say that a woman who agrees with me about the moment of birth should be allowed to kill her baby just a moment before birth, without any representation of the view (which the uncertainty leaves open) that doing so may be impermissible.”

WHUT? Again relying on a canned poetic talking point to pull the wool over our eyes, he seems to be saying that late in pregnancy there are very few cases where Roe allows abortion. But in fact it allows abortion in EVERY late-term case if a state so wishes. If a state wishes to restrict, okay, Roe allows some (almost-token) restrictions.

3:31 But this is something that I believe is so important especially because I’m never going to have to make that decision.

What? Sounds humble and all, but what is important, abortion? If abortion, how does the last clause make it important? It sounds like an answer that has worked for him in a thousand discussions, knowing that the TV host would want to keep things fast-moving and quickly move on.

3:40 I cannot imagine that a decision that a woman confronts is going to ever be better medically or morally because it’s being dictated by any government official.

Sounds nice, but he’s saying that in a situation of opposing interests between two parties (woman and baby), he can’t imagine that an impartial party can make a better decision than one of the two interested parties. Do we want a slick-talking president with a bankrupt sense of justice?

THIS WEEKEND in Our Nation’s Capital