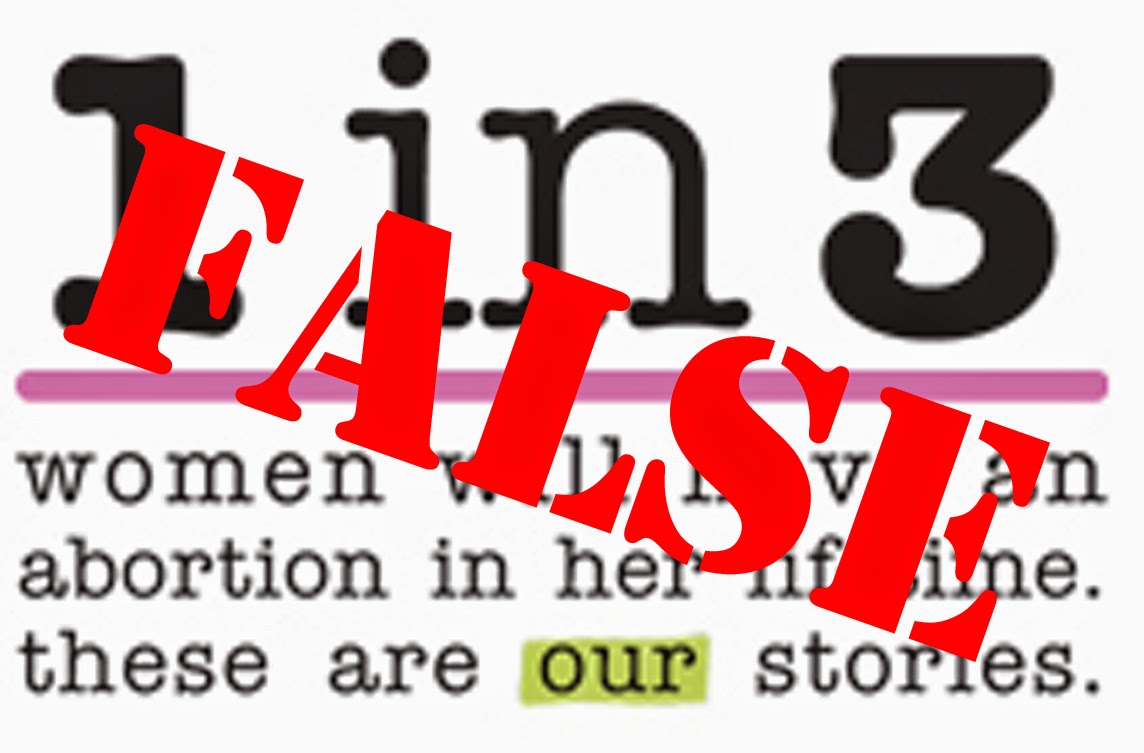 A reader emailed me asking if we could do a piece on the oft-touted statistic that “1 in 3 women will have an abortion in her lifetime” (or “by age 45”). Happy to oblige. By the way, suggestions for blog topics are always welcome.

The pro-choice movement loves to use the 1-in-3 statistic, arguing that it “humanize[s] the issue.” (The irony of that statement does not escape me.) Of course, from a pro-life perspective, it matters little how many people have had an abortion; we know from history that large masses of people are capable of being very, tragically wrong. The apparent message they’re trying to get across—that every third woman you see on the street has killed at least one embryo or fetus and therefore it must be totally okay—is, let’s face it, not a logical argument by any stretch of the imagination. But as the pro-life movement gains ground, I’m sure abortion supporters find it comforting that they have some strength in numbers. There’s even a pro-choice book and campaign named after this statistic.

So I’m sure you’ll be shocked to learn that this statistic is complete hogwash. (That was sarcasm. If you really were shocked, you must be very new to the pro-life movement. Welcome aboard.)

The 1 in 3 campaign cites to a factsheet by the Guttmacher Institute, a pro-abortion think tank. That fact sheet, in turn, cites a 2011 study by Dr. Rachel Jones and Dr. Megan Kavanaugh, which is based on abortion data from 2000 to 2008. The Jones & Kavanaugh study states:

The cumulative first-abortion rate increases with age, and women aged 40 and older had a rate of 300.9 per 1,000 women. Put differently, an estimated 30.1% of women aged 15–44 in 2008 will have an abortion by age 45 if exposed to prevailing abortion rates throughout their reproductive lives.

That’s assuming Jones & Kavanaugh’s numbers are reliable to begin with. The authors, to their credit, actually caution us that they may not be. Their method was to look at abortion rates within various demographic subgroups and then use that data to come up with an overall abortion rate. But (emphasis added):

Considering the substantial changes in abortion rates observed among young women, African American women, and poor women, abortion rates were calculated to determine potential interactions among these groups. Because some of these subgroups are relatively small and because the confidence intervals suggest some degree of inaccuracy, these findings are best interpreted as general patterns as opposed to precise measures.

Most important of all, however, is the fact that the 2011 study relied on old data. That isn’t Jones & Kavanaugh’s fault; abortion data is usually several years behind, whether you’re talking about Guttmacher or the CDC. But this is a major issue, because abortion rates have dropped drastically since 2008. In the three years between 2008 (when the study’s data set ended) and 2011 (when the study was published), the U.S. abortion rate dropped thirteen percent, to the lowest level since Roe v. Wade. And another three years have passed since then!1

At this point, there’s just no feasible way that the lifetime abortion rate is even close to 1 in 3. We should celebrate that today’s teenagers have much better things to look forward to than a one-in-three chance of being a party to an abortion.

Interestingly, the Jones & Kavanaugh study points out that an earlier study (in 1992) had predicted that a whopping 42% of women would have an abortion by age 45. The overly-enthusiastic abortion projection is not a new phenomenon.