Preface: Many pro-life activists argue that abortion should be illegal even in the case of rape. While SPL does not take a position on the rape exception, we do agree that the rape exception should be discussed with particular sensitivity. Whenever you are discussing topics related to sexual assault, whether in the context of abortion or any other context, please take the time to understand how your comments could affect sexual assault survivors.

Additionally, please note that the following blog post originally arises from a conversation about rape and pregnancy, so the ideas are expressed in terms of male attackers and female victims. However it’s important to be aware that men can also be sexually assaulted.

Recently I posted this paper to the SPL Facebook page, and quoted from it as follows:

A victim of acquaintance rape in North Carolina became pregnant and carried her child to term. The man she accused of raping her threatened to assert his parental rights unless she agreed not to file charges against him. Another woman from North Carolina became pregnant as a result of rape and placed the baby for adoption. To complete the adoption, she needed the rapist to terminate his parental rights. The rapist, who was in custody awaiting trial, told her that he would terminate his parental rights only if she agreed not to testify against him.

I thought this passage would inspire a conversation about how our society can better support survivors of rape who want to carry their pregnancies and parent their children. To my dismay, this was one of the first comments:

Similarly, the other day, a casual FB friend of mine tagged me in a post asking what I thought of this photo:
Okay, class. What’s wrong with these ideas?
People who haven’t looked much into rape culture (or worse, who don’t believe rape culture exists), may argue that, underneath some of the harsh verbiage, there are valid points to be made here. They muse, “Yes, of course, we all care about rape victims. But if our interest is justice, we must also care about people falsely accused of rape. The wrongfully accused deserve consideration too.”
We want people to pay for the crimes they commit, but we also don’t want innocent people to be punished, right? Right! So why would anyone have a problem with focusing on false rape accusations?
In order to explain the problem, I need to give you a quick quiz. Don’t cheat now! See how you do without scrolling ahead.
Curious how you did? Let’s review.
According to the US Department of Justice, in 2012 there were 346,830 rapes and sexual assaults, and 72% of these attacks were not reported to authorities. In other words, an average of 684 attacks went unreported each day, for a total of 249,717 unreported attacks in 2012. And we aren’t even touching on how few reported attacks result in charges filed, or how few charges filed result in convictions.
In contrast, the most methodologically sound research suggests between 2% and 8% of rape and sexual assault accusations are false.
So if 28% of attacks are reported to authorities, and there were 346,830 attacks in 2012, how many reports did authorities receive? That’s right! Authorities would have received 97,112 reports of rapes and sexual assault. Please note we are again talking about reports, which are, again, not the same as charges filed, much less convictions. 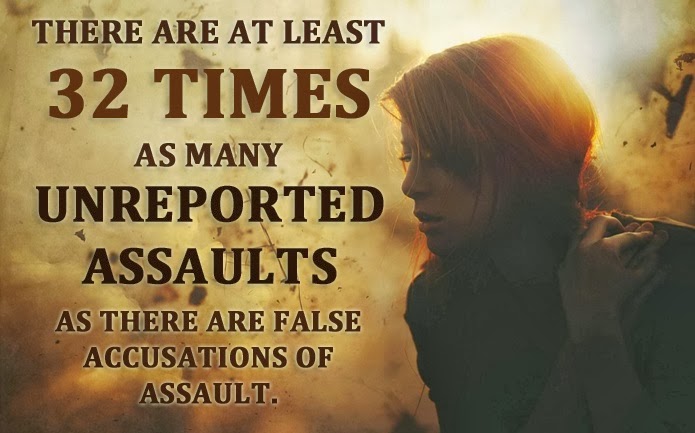 Now, does this situation mean we should never talk about the injustice of false accusations? No. Falsely accusing someone of a crime is horribly wrong, and it wreaks havoc both on the person falsely accused and on the criminal justice system as a whole. That deserves a conversation.

But what I am seeking is a sense of proportion here. Do you hear people talking about unreported rape 32 times as often as you hear them talk about false rape accusations? Because I sure don’t. If anything, I hear people discuss false rape accusations more often than they ever talk about how many attacks go unreported. Our public discourse on rape is hugely disproportionate to the reality of the situation.

And having such a skewed public conversation about rape isn’t just misleading–it’s horribly damaging. Sexual assault survivors are frequently surrounded by an atmosphere of suspicion and even hostility, and we promote that atmosphere every time we jump to, “But what if she lied?” When survivors think they won’t be believed, they don’t speak up. When they don’t speak up, unreported rapes rise, both because less people are reporting their attacks and because the attackers can continue their behavior without repercussion.

So remember this idea? “Yes, of course, we all care about rape victims. But if our interest is justice, we must also care about people falsely accused of rape. The wrongfully accused deserve consideration too.”

Me: “Oh my god! The House of Justice is on fire, please help me to save it!”
Other people: “Yes, of course, we all care about the house being on fire. But if our interest is in keeping up the house, we must also care about smashed windows. Smashed windows require repair too.”
How does that sound to you?
And really, this analogy doesn’t even cover it, because it doesn’t account for how, every time you focus disproportionately on smashed windows, you actually throw gas on the fire. How? Because every time you emphasize not trusting women who say they’ve been raped, you make it harder for survivors to come forward with their incredibly painful stories. And that means more rapes go unreported.
So if you’re not going to help me put out the fire, could you at least stop throwing fuel on the flames? That’d be great.

*Thanks to my friend Mishy for the analogy.

Best “parasite” I’ve ever heard of!

How do mental health professionals deal with abortion?
Scroll to top