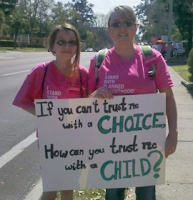 Recently, in a divorce and custody case in New York, a wife argued that she was under great stress caused by her soon-to-be-ex-husband. In cross-examination, the husband’s attorney asked whether some of that stress might instead have been caused by a recent abortion.

I happen to be an attorney, and while this line of questioning may have been intimate and embarrassing, it wasn’t legally improper. She raised the issue of her stress; he was entitled to offer an alternative explanation. That’s how it works. (Same result if the recent medical event were something other than an abortion.)

Still, abortion advocates were furious. I want to respond, in particular, to something Robin Marty wrote:

Allowing a woman’s abortion to be used in a custody battle, regardless of whether it occurred before or after the divorce, is an absolute new low when it comes to the idea of shaming women for choosing not to carry a pregnancy to term. The idea being presented is simple: A good mother would never seek out an abortion, so if she ends a pregnancy, she must be an unfit one. … [T]hat’s a whole lot of women out there to be painted as “bad moms” who shouldn’t be allowed to have custody of their children.

First of all, this completely erases all the women out there who are pro-life because of their past experiences with abortion. I know many post-abortive women who are also amazing moms, including many who are active in Secular Pro-Life.

But setting that group of women aside, do pro-lifers believe that women who have had abortions (and don’t feel bad about it) are unfit mothers? Likewise, do we assume that men who have supported a partner’s abortion are bad fathers to their living kids?

I can’t speak for every pro-lifer, but my answer is a firm no.

Most people who have abortions don’t do so “in cold blood.” They do so because they are coerced by partners, and/or lied to by abortion counselors and doctors who they thought they could trust. Pro-lifers should have nothing but compassion for these women. There is absolutely no reason to think that they would be unfit parents.

Yes, there are a few who have/support abortions despite knowing the facts of life in the womb and having realistic alternatives. I still think they can be good parents. Never underestimate the ability of human beings to compartmentalize. I fully believe that a bank robber can shoot a teller and consider it “just business,” but love his children deeply. Surely I should give post-abortive parents at least as much credit!

Ideally, every parent would love all of their children unconditionally. In the case of an unapologetically pro-abortion (and not “personally pro-life”) parent, there is a condition: namely, that the child’s conception occur at a convenient time. But once that condition has been met and the child has been born, a parent’s beliefs about the worth of the unborn are of no practical importance for the child’s well-being.

A Brief History of Pro-Life Medicine