[Today’s guest article and illustrations are by Elise Ketch.] 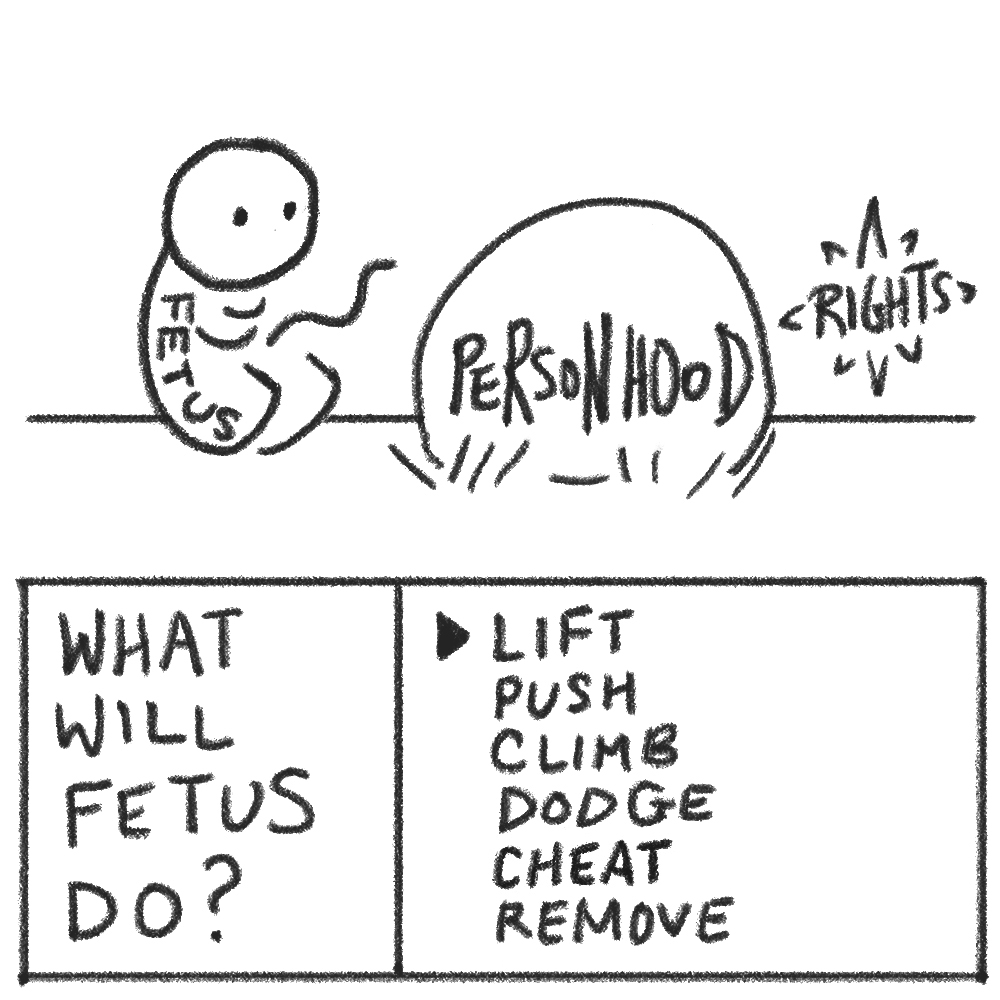 So you’re a fetus defender, and a troll has appeared from the bowels of the internet to gatekeep basic human rights.

“A human fetus doesn’t have rights unless it’s a person,” declares the troll, placing the obstacle of personhood between the fetus and their rights. “And if it’s not conscious like me then it’s not a person, so it’s not wrong to inhumanely destroy it.”

Fortunately, you have this guide, so you have the stats on 6 strategies to get past this obstacle. Which attack will you choose?

Pro-tip: Pro-abortion advocates often believe “only conscious beings are people” because it appeals to intuition. This intuition likely comes from two ideas: first, that if we met a rational non-human being (such as a spirit or an extraterrestrial) we would instinctively relate to them as another person; second, that we don’t relate to most irrational animals as other persons. So, since fetuses aren’t rational in a way that makes consciousness observable, we don’t intuitively relate to them as persons. Keep this in mind for your strategy. 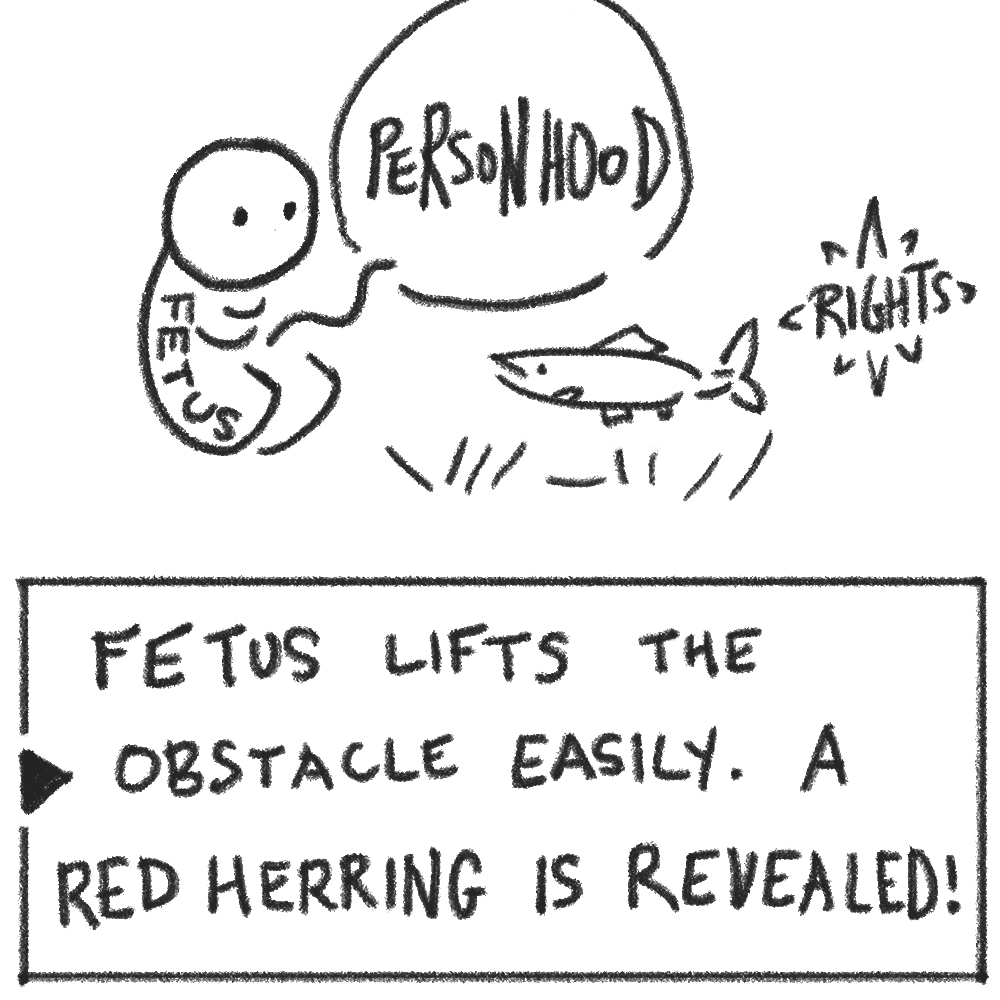 The Argument: As human beings grow, they develop not only conscious awareness of their own existence, but also many other advanced cognitive capabilities at the same time (such as learning and memory). Consciousness is of limited use in a person without all these other capabilities, so we don’t have sufficient reason to think consciousness is particularly special. The development of consciousness is just one event in the process of humans attaining the minds of persons. Further, a being does not have to value consciousness to be a person. Imagine two beings: the first can only think about itself relative to others, and the second can only think about its experience of the world. There is no obvious reason to give the first being rights and not the second. Consciousness is a distraction from focusing on what is actually significant about being a human person.

Why it works: Beyond their intuition, the pro-abort likely doesn’t have a reason that proves being conscious is enough to be a person– or, probably not a reason that is backed by both solid logic and strong evidence. Use this core weakness to refute the belief.

When to choose: When you are unfamiliar with the pro-abort’s stance. It’s a good strategy to “get a feel” for their perspective.

How to use: Ask, “what makes consciousness so special?” After they give reasons, point out why the reasons aren’t relevant or convincing.

Source: “The Moral Insignificance of Self-Consciousness” by Joshua Shepherd (2017) 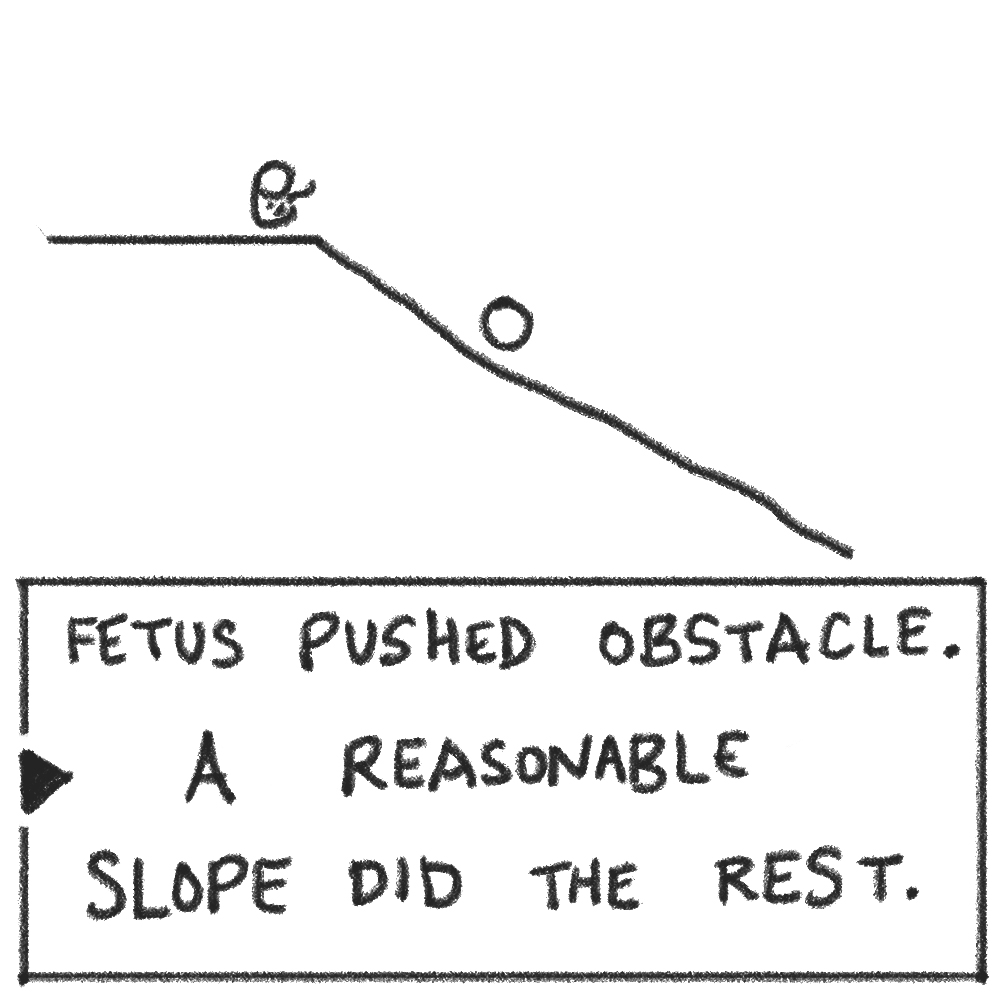 The Argument: Human consciousness isn’t sophisticated enough for many months – if not years – after birth to be distinct from irrational animals. Thus, neither fetuses nor infants are meaningfully conscious enough to be identified as not “non-persons”. If for this reason we may abort a human fetus, then we may do the following to a human infant: abort it after birth, harvest its living organs, subject it to live experimentation, use its living body for sex, and selectively harm it for apparent gender or sexuality. Further, money could be made from these practices. This justifies infant sex trafficking. The infant will never become a victim if it is simply aborted before it becomes a person; as long as it doesn’t feel pain or suffer, this is humane.

Why it works: By reasonably extending its logic to illustrate its absurd implications, you show that the pro-abort’s belief that ‘non-conscious humans aren’t persons’ isn’t reasonable after all!

When to choose: When the pro-abort is committed to the intuition that “consciousness” is necessary to be a person, or denies that it alone isn’t enough to be a person with rights.

How to use: Propose the five scenarios to the pro-abort. Ask, “do you find any of these unacceptably wrong? What makes them wrong, but not abortion?”

Source: “Beyond Infanticide” by Rodger, Blackshaw, and Miller (2018) 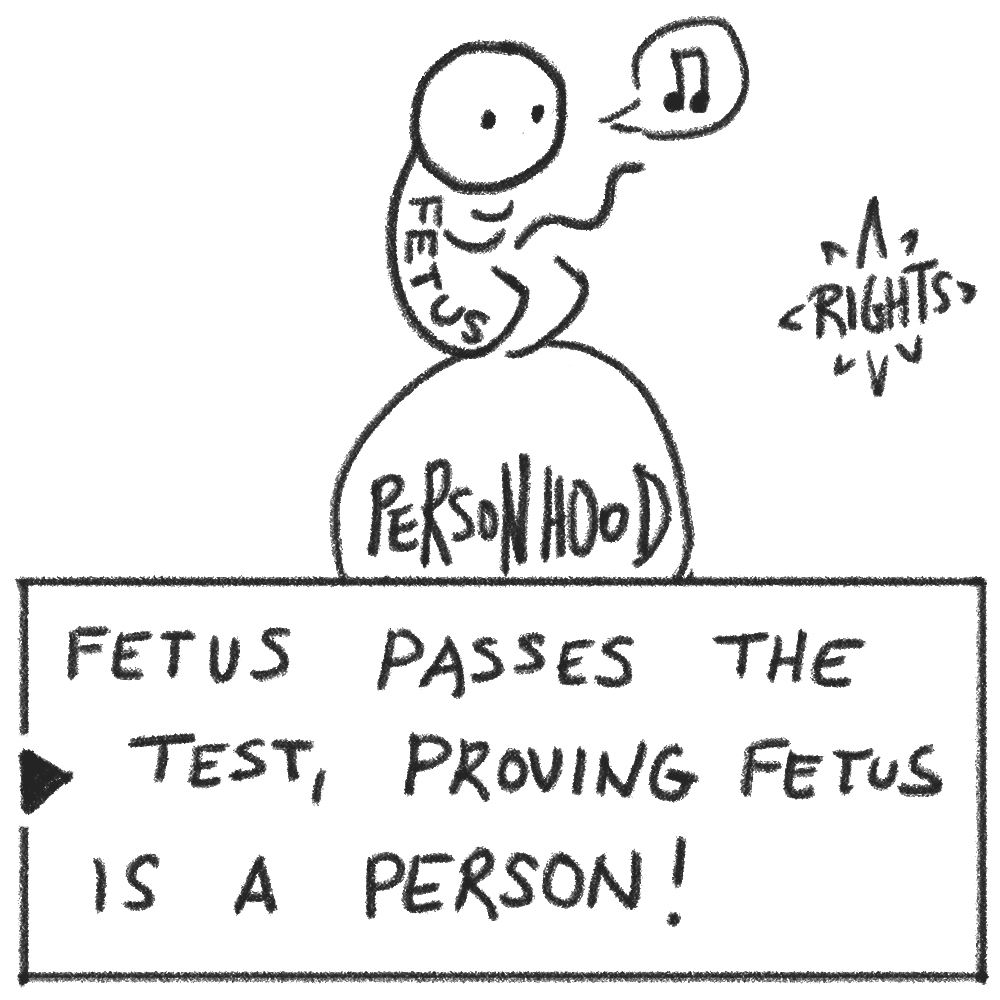 The Argument: A living human organism is always in the process of either attaining, retaining, or restoring the capabilities that make her a person. A human fetus actually has the present capacity for this process because it is a feature of humankind, to which she belongs. This establishes continuous active relation between every stage of her biological life cycle; her identity as the person exercising this capacity transcends each phase of her existence, from adult person to human embryo. Since there is no change in identity between the fetus and her born self, she should be recognized at conception as the same person she will be at birth.

Why it works: This rebuttal can tie in the pro-abort’s preexisting beliefs about when a human becomes a person; a fetus is in the active process of attaining [insert any capability that they believe makes us persons] through her actual capacity to do so as a member of humankind.

When to choose: When the pro-abort challenges you to prove that a fetus is a person, or claims that there’s no better reason than theirs that we are persons.

How to use: Boldly state, “a human fetus is always in the process of either attaining, retaining, or restoring the capabilities that make her a person, and so are we.” Then ask, “what about this doesn’t make her the same person she will be at birth?”

Pro-tip: We should accept this criterion for personhood because it’s not arbitrary or conditional. It doesn’t enable prejudice based on level of ability and dependence, age, body size, or location. It can be consistently applied in principle, without discrimination or bias, to all instances of human beings within every contingency. It is sufficient for qualification of persons but not necessary, thus it does not privilege a kind of being; any being with the inherent capacity for kinship with humankind also has active relation with personhood. It is demonstrative of personhood, not merely indicative. And most notably, it can explain unambiguously and analytically when and why a human is not a person. 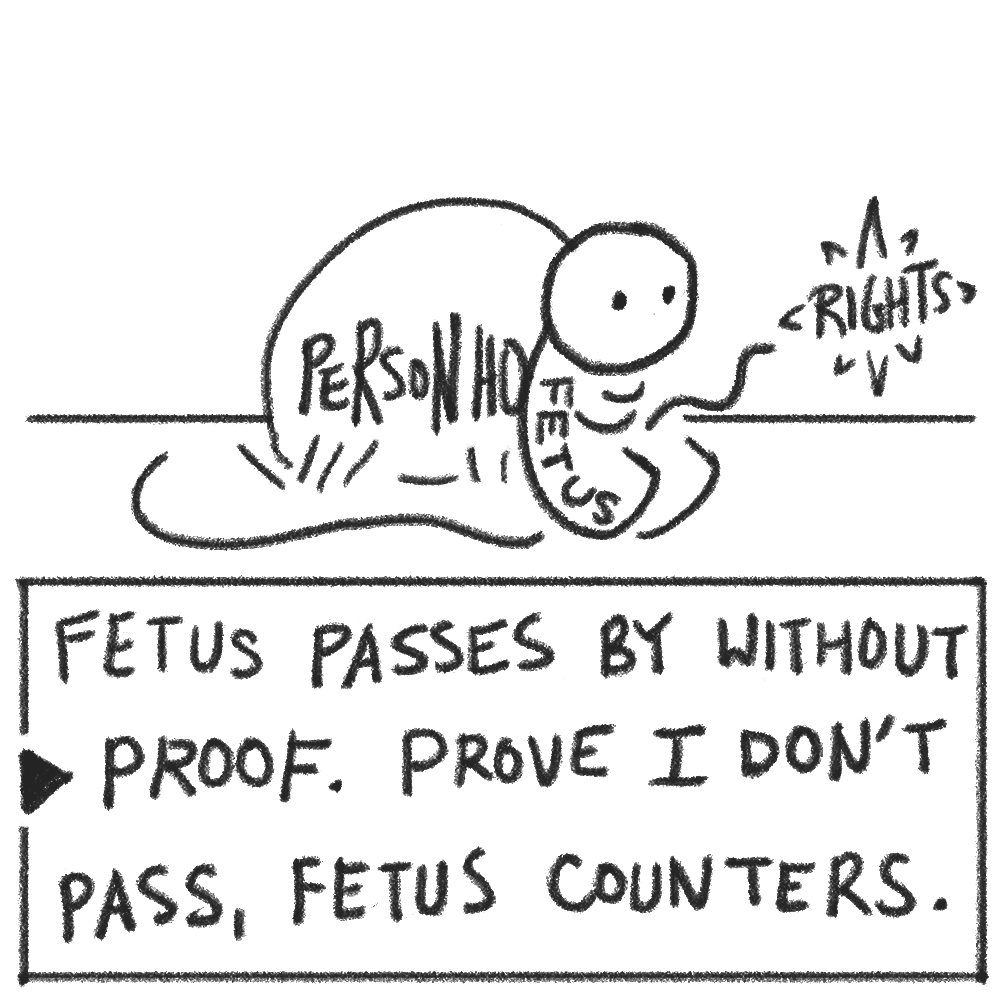 Why it works: This rebuttal puts the burden of proof on the pro-abort, calling out their imposition of beliefs. If they attempt to employ ambiguity or skepticism to shut you down, this turns their own strategy against them.

When to choose: When the pro-abort claims that “we can’t really know when the fetus becomes a person” or demands that you keep church and state separate.

Source: “The Apple Argument Against Abortion” by Peter Kreeft (2001) 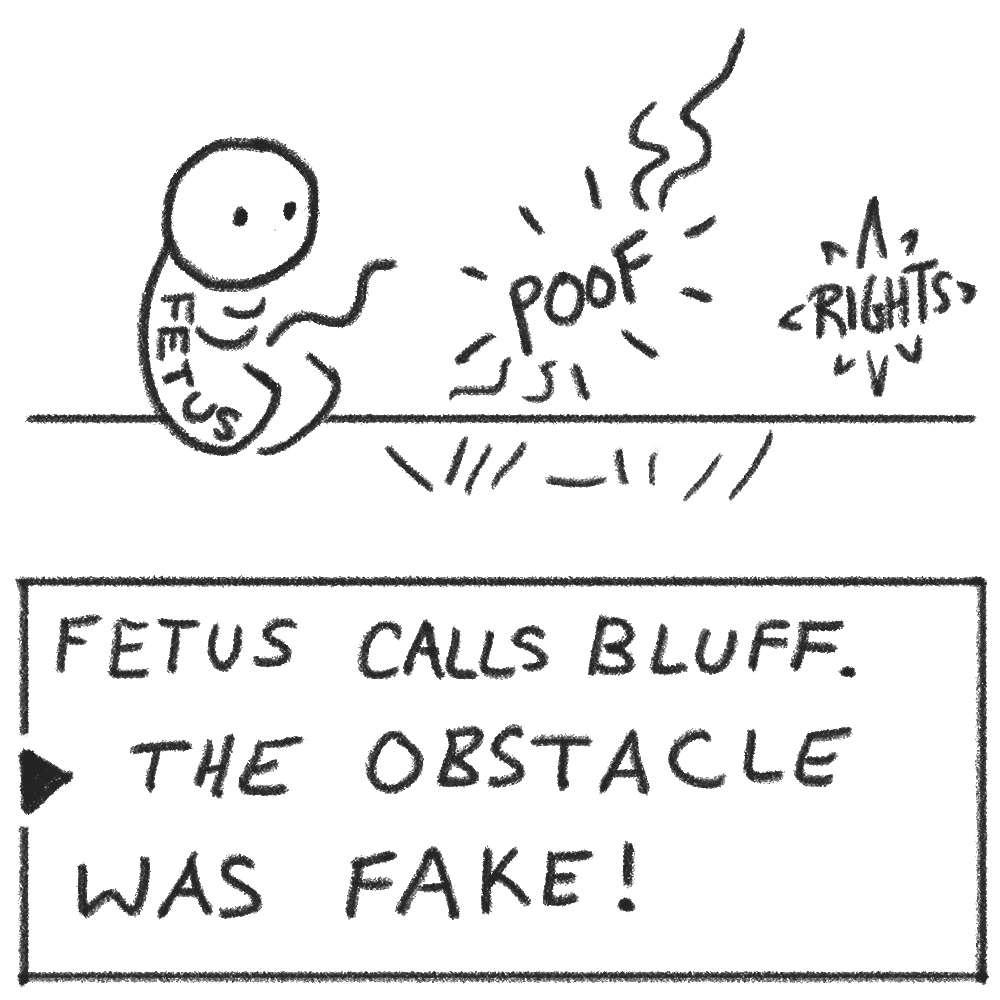 The Argument: The preborn aren’t persons, and out of fairness they still ought to have a protected right to freedom from deliberate violence. After all, it’s not to our credit that we became persons and a fetus has not yet, nor is it the fault of the fetus that it is not a person while we are fortunate enough to be persons. Any human contingently denied the opportunity to become or to remain a person ought not to be lethally penalized for having lesser fortune than the rest of us; that is simply unfair. It is not because non-persons are human that we ought to protect them from a violent end; it is our own humanity as persons that demands we treat less fortunate humans humanely.

Why it works: This rebuttal cheats the “rules” by challenging the legitimacy of personhood as a necessary criterion for rights. It forces the pro-abort to reconsider what kind of living human being ought to be given moral consideration, and builds off their preexisting belief that the preborn aren’t persons.

When to choose: When the pro-abort is stubbornly committed to denying fetuses are persons or is an animal activist.

Source: “In Defense of Speciesism” by Michael Wreen (1984) 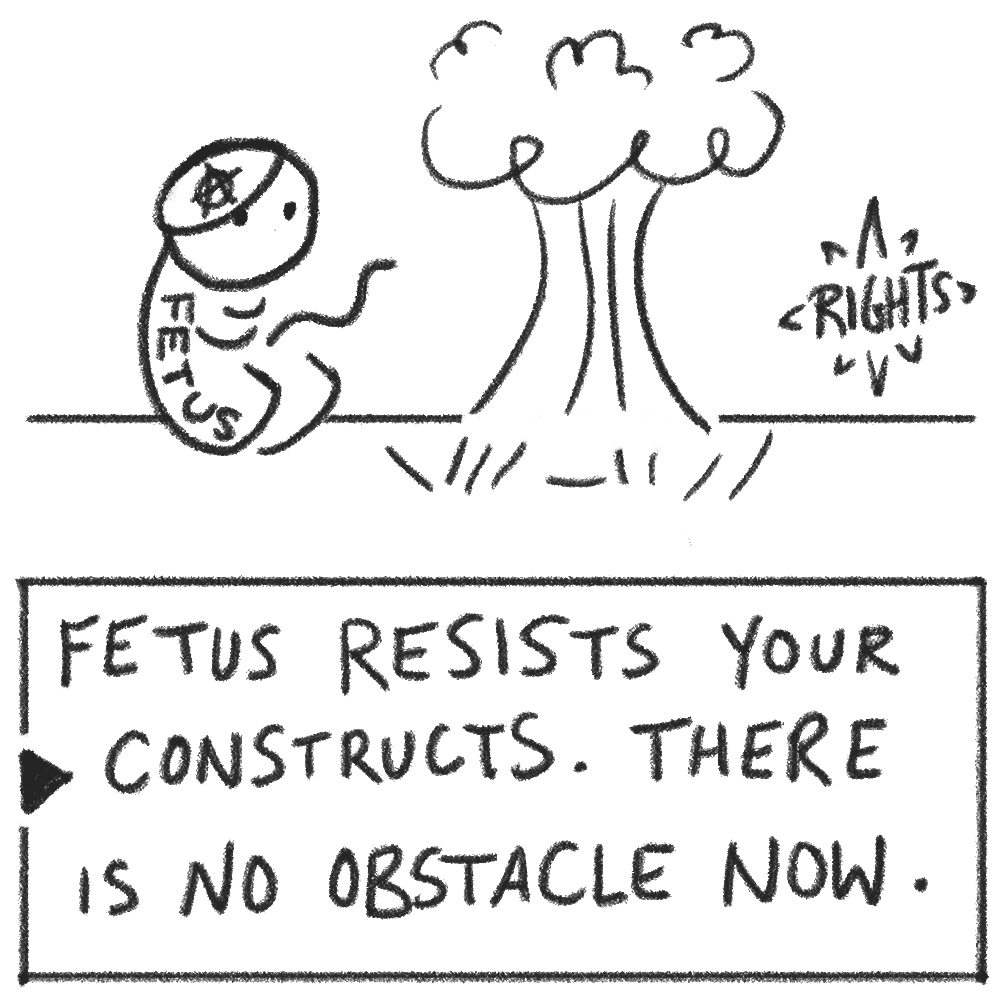 The Argument: The construct of personhood has almost exclusively been used to disenfranchise vulnerable humans, not to extend them power. Personhood will always exclude certain humans – a fact which has been consistently and deliberately weaponized throughout history to dehumanize, discriminate, torture, and kill. The definition of who can or cannot be a person is ultimately a rhetorical debate that ignores scientific facts. No human is an illegal person. If there could ever be a category of “living humans who are not persons,” then personhood at best is a useless attribute – at worst, lethal. “Personhood” should be abolished.

Why it works: This delegitimizes the idea of “personhood” by restricting its use in the same manner many have called for the restriction of other lethal weapons. It also uses language that many pro-aborts will be familiar with from the context of other issues which they support.

When to choose: As a last resort in a worst-case scenario. If nothing else speaks to the pro-abort, destabilize the very foundation of their argument. They will probably point to valid reasons to not abolish personhood, so attempt this maneuver at your own risk.

How to use: Ask, “What if, because someone with power over you believed you are not a person, they could legally deprive you of oxygen and nutrition, poison you, burn you, exsanguinate you, or dismember you, as abortion procedures do to preborn humans?”

Source: “On Abortion” by Rehumanize International (2019)

Pro-Tip: If you have exhausted all of your strategies and the pro-abort still hasn’t budged, they may be a lost cause. Before focusing your efforts on more fertile ground, you can still sow seeds for further consideration with this pro-abort on the chance that, given time, they will mature into fruitful discourse. Leave them with this thought: “For now, we do not have a practical method to discern which beings are moral equals to us as we encounter them. We need a coherent argument, with systematic application, backed by irrefutable evidence. Until we agree on one, let’s work together to make this world more accommodating of fertility. Women deserve that.”

A Briefing on International Law and Abortion

Which States Have Protected the Right to Life? Scroll to top