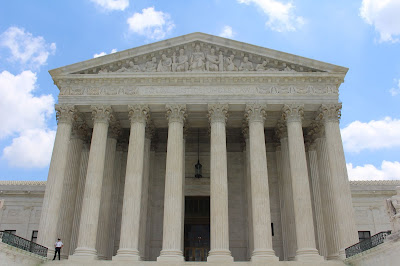 The United States Supreme Court’s next term will not start until October, but it is already shaping up to be one to watch! The Court has accepted two abortion-related cases for hearing. Although neither one is a direct challenge to Roe v. Wade, we can expect to receive important signals on where the Justices stand. The very fact that they accepted two abortion cases is a signal in itself; the Supreme Court only hears about 100 cases per term, declining the vast majority of appeals. Clearly, the newly appointed Justices are not afraid to take on a hot-button issue.

The first case, American Medical Association v. Cochran, concerns the federal Title X program, which funds family planning. The Trump administration implemented the “Protect Life Rule” to prevent Title X subsidies to abortion businesses and referral centers. As Catherine Glenn Foster of Americans United for Life eloquently puts it: “Title X is intended for family planning, not abortion. Abortion is not family planning. Abortion is always a violent act that ends the life of a distinct and valuable human person. The former administration made the right decision by clarifying the congressional intent of Title X that organizations that profit from abortion cannot receive taxpayer money.”

The Biden administration is expected to kill the Protect Life Rule and turn the spigot of taxpayer funds to Planned Parenthood back on, but that doesn’t make the case moot. The Supreme Court’s decision in Cochran could make it easier for the next pro-life administration to re-implement the rule, and strengthen the legal position of states looking to defund Planned Parenthood from their own programs.

The second case concerns a procedural matter in the lawsuit over Kentucky’s ban on dismemberment abortion (also known as dilation and evacuation or D&E). The law was passed in 2018 and has been tied up in the courts ever since. When an abortion supporter won Kentucky’s governorship and declined to continue defending the law in court, the state’s pro-life Attorney General, Daniel Cameron, stepped in. The question for the Supreme Court is whether AG Cameron’s substitution was proper. If the Justices allow AG Cameron to keep up the good fight, perhaps it won’t be his last time at the Court.

Four Ways that Chemical Abortion and Telemedicine Will Change the Abortion ...
Scroll to top