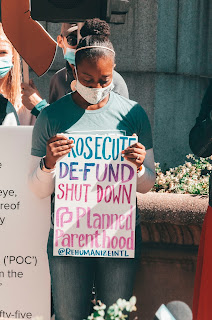 Planned Parenthood recently released its 2019-2020 annual report. Once again, Planned Parenthood has increased its share of the abortion market while sidelining legitimate, non-violent reproductive health services. This will come as no surprise to anyone who has been paying attention. It is a continuation of a trend that has been going on for many years.

I can’t summarize it better than Dr. Michael New, writing for the Charlotte Lozier Institute:

Disgustingly, Planned Parenthood appropriates the imagery and language of racial justice throughout its report. The very first photograph is of a Black person’s raised fist, and the phrase “Black Lives Matter” appears repeatedly. Planned Parenthood was not only founded in eugenics but continues to come under fire for mistreating its employees of color. The racist organization kills tens of thousands of Black babies in the womb every year. Planned Parenthood’s attempt to hide its radical abortion agenda by riding the coattails of good causes shouldn’t fool anyone.