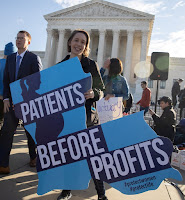 Vox recently published an article entitled “These are the popular ideas progressives can win with (and some unpopular ones to avoid),” by Matthew Yglesias. The piece profiles a polling outfit called Data for Progress, which recently conducted a nationwide survey on 56 policy questions. Yglesias wrote:

Each one was tested with explicit partisan framing and pro-and-con arguments to avoid the typical problem with issue polling where all kinds of things can easily be made to sound nice. (You can see all the questions with pro and con arguments here and a table of the poll results here.) The group also aimed to be credible, sharing the full results, including the finding that several ideas the organization is associated with — including abolishing Immigration and Customs Enforcement, ending money bail, and cutting military spending — poll quite poorly.

This reported approach to framing survey questions dovetails nicely with my colleague Monica Snyder’s recent tweet that “If we can’t describe the other side’s position in a way that they would say ‘Yes, that’s what I think,’ then we can’t really claim to understand their position.” (Admittedly, that’s not an original observation; Equal Rights Institute, and many others, have long made a similar point.)

But when I dug into the source material looking for abortion questions, I found that Data for Progress’s attempt to describe the pro-life position was… well, see for yourself:

Some Republicans in Congress are proposing a policy that would require doctors who perform abortions to to be board certified or eligible in obstetrics and gynecology and that air temperature must be maintained at between 72 and 76 degrees in patient areas.

Republicans supporting this proposal say these rules are necessary to protect the health of the mother and to ensure abortions are conducted in a safe manner.

Democrats opposing this proposal say these rules are not medically necessary and are actually designed to restrict abortion access through limiting the quantity of doctors and hospitals capable of providing a legal service.

Do you support or oppose the proposal?

That is a laughably bad description that comes nowhere close to neutrality. I have been a pro-life activist for over a decade. I have observed coalition meetings of pro-life leaders discussing legislative strategies. And I have never, not once, heard anyone talk about the temperature of abortion facilities.

The basic idea behind pro-life legislation in this area is that abortion facilities should be held to the same legal standards as clinics where outpatient procedures other than abortion are performed, i.e., ambulatory surgical centers. Since I haven’t reviewed every state’s regulations of ambulatory surgical centers, I’ll grant that it’s possible some of them mandate temperatures; after all, nobody likes to have cold A/C blasting on them while wearing a thin surgical gown. But it’s hardly a focal point of the abortion debate. If you’re looking for a prime example of abortion facility regulations, might I suggest the requirement of admitting privileges, which was argued at the United States Supreme Court just this week? Or perhaps you could discuss hallway width, which pro-life advocates maintain is necessary to accommodate stretchers and pro-choice advocates dismiss as unnecessary.

Here’s the best part: even with their biased question, only 27% of respondents opposed the abortion facility regulation proposal! (A 45% plurality supported it, while the rest were unsure.) Good luck getting a majority to rally against pro-life regulations as they actually are.

Still, points to Data for Progress for their transparency. In that spirit, I would have worded the question something like this:

Some legislators are proposing a bill that would expand regulations of outpatient surgical facilities to include abortion clinics. These regulations include a requirement that hallways be wide enough to accommodate stretchers and that doctors have admitting privileges at a local hospital. Supporters of the bill argue that these regulations promote women’s health. Opponents of the bill argue that compliance with the regulations is too expensive, and as a result, abortion clinics will close and abortion prices will rise out of poor women’s reach.

Pro-choice readers, please let me know if I have accurately represented your stance.