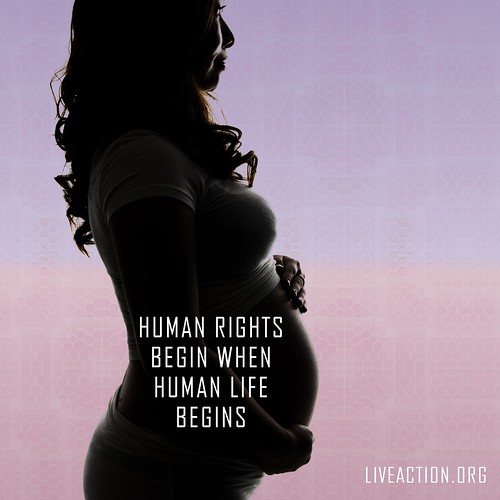 [Today’s guest post by Barry Stefan is part of our paid blogging program.]

“The equal protection of the law should extend to all members of the human family, old or young, black or white, able or disabled, gay or straight, born or unborn—those are the values of human dignity and human equality that should be reflected in our laws, our lawmakers, and our law enforcement.”
~ David Daleiden, Center for Medical Progress

“They’re human beings today, and I’m glad I had the opportunity to make my own reproductive choices, as a right that every woman has and should maintain.”
~ Debbie Wasserman Schultz, in response to the question of whether or not her children were human beings before they were born

I’d like to take a moment and reflect on what a great time it is to be pro-life. Maybe I’m overly optimistic, but I see a changing tide. First, we had David Daleiden – the man responsible for pulling back the curtain on what daily life is like for those who traffic in the business of abortion (spoiler alert: they use dark humor as a tool for self-preservation. “Another boy!!!” Slice.) – speak eloquent truth to power. Speaking in a way that might surprise some to learn he’s Catholic, he tied the struggle to end abortion with the struggle against racism and the fight for gay rights. Meanwhile, the head of the DNC offered a non-answer to a direct question as to whether her children were human beings in the womb.”They’re human beings,” she said, coming dangerously close to correctly answering the question, “today.” Ok, so this latter response is nothing new. Dehumanizing nascent human life as non-human beings has been the bread and butter of pro-choice politics for decades. But Daleiden’s decidedly secular language provides a fresh counterpoint and suggests a new emerging narrative; not an us vs. them story of the God fearing vs. the civic minded, but the story of an ideology’s forced self reflection as society broadly adopts its moral language.

Exhibit A of this new narrative is the noticeable decline of religious life in America. In some ways, this may come as welcome news to pro-choicers, but there’s another phenomenon that should have them worried. While religious decline coincides with more tolerant attitudes for homosexuality across both religious and unaffiliated groups, it has not translated to liberalized attitudes on abortion across these same groups. This is a big deal for a society that conflates traditional marriage and pro-life sentiment as solely religious concerns. I am agnostic on the net effects of religious decline, but it undeniably exposes the myth that defense of nascent human life is cut from the same cloth as denying human rights based on sexual orientation. Before research confirmed the downward trend of religiosity, it was easy enough to point to organizations like Secular Pro-Life who belie this myth, but these types of organizations may well just have been outliers – exceptions to the general rule, perhaps just the occasional progressive misanthrope who, God bless them, misapplies liberal orthodoxy. But the inability of pro-choice sentiment to capitalize in an increasingly secular society indicates secular pro-life thought is not an outlier, but rather a preview of what’s to come.

Declining religiosity is more than just less formal religion. It’s a fundamental shift in the informal, everyday aspects of our life – the way we think, the way we interact and, ultimately, the moral language we speak. Within today’s framework of social justice and equality, it’s intuitively easier to understand why traditional marriage might never have stood a chance. But it’s not so easy with abortion. After all, where’s the equality in dividing nascent human life into those who are wanted and those who are not? So while it may be extremely fishy and just a titch ironic, it may not be all that surprising that in these crazy times you can find a devout Catholic speaking eloquently and fluently in defense of equality, while a devout progressive and top Democratic representative clings to just the kind of technicalities one would cling to if they wanted to avoid an honest discussion on the nature of equality. Maybe no one will notice. Just this time. Just this once. Just on this issue.

But we are noticing. And we’re noticing because we speak the language of equality. We know the words, we get the concepts, and we understand just how high a standard it is. We know it’s disruptive to the status quo and not always comfortable. So we don’t blink at the fact that equality might have a disruptive thing or two to say about the manner in which we treat nascent human life. And we’ll call you out on the cake-and-eat-it-too dissonance between a supposed commitment to equality and the desperate attempt to retain the sanctified, but ultimately old-fashioned practice of killing human beings to preserve a grace period to parenthood. Sure, you may want to reap the social and economic “rewards” of eliminating unwanted fetuses, but it’s a braver, more equal world out there and equality has something to say about benefitting off the backs of others. The economic spectacle of slavery learned this lesson long ago. Recently, we’ve learned that we cannot maintain the fiction of a heterosexual society by keeping gays and lesbians in the shadows. And soon we will learn that an attitude that values adult desires and needs over nascent human life is ill suited to meet the high standards of equality. Certainly take all prophylactic measures you wish; Secular Pro-Life encourages it. But killing your offspring is nothing less than discrimination based on level of development, no different than discrimination based on race, gender or sexual orientation.

If you are pro-choice and reading this, you are probably thinking many things, one of which may be that this is all bunch of crap and Ms. Schultz has it exactly right. An embryo, zygote, fetus or any human being that doesn’t meet a certain developmental threshold are simply not persons, so inequality is a moot point. To which I would reply that inequality isn’t limited to discrete examples of violations of a self-aware, thinking person’s individual rights. It is firstly an arbitrary climate we create through a focus on meaningless traits. If, back in the day, equality came across a freed slave, it would not be impressed. It doesn’t care much that this particular individual is free, it cares about why he’s free. And if the answer is because his “owner” freed him or anything less than because he’s a human being, then no matter how free this person is legally, BOTH he and his enslaved counterparts are victims of inequality because his freedom and their lack of it is arbitrary. This also holds true for any offspring he might beget. If the child is free only because she was born to free parents, it doesn’t matter if she goes through life unaware of oppression, discrimination or other setbacks; she’s still a victim of inequality.

Nothing about this moral framework changes when the subject is nascent human life. Whether it’s the 50+ million unborn lives legally snuffed out since Roe v. Wade or the 100+ million of us who have survived this shameful decision’s limits upon our humanity, the stain of inequality touches us all. The fact that nascent human beings are not self-aware, conscious, or able to feel pain is only relevant because these are precisely the traits used by foes of equality to rob them of their humanity and bring about the arbitrary environment in which we currently live. Schultz doesn’t even attempt to pay lip service to this idea. Yet history is replete with stories about how attempts to define human beings have run afoul of the interests of equality. It’s such a complete story that one wonders who exactly the last person was that argued a whole class of human life were not persons, proceeded to sanction the killing of that class and was, in the end, morally correct?

This is why, for at least one reason, the decline of religiosity is such a magnificent thing. It is crumbling the pillars of self-preservation on which lethargic pro-choice attitudes rest. The prevailing narrative of abortion as a cosmic fight between the religious and the civic minded provided cover for this lethargy since there’s a certain security in avoiding an issue because the other side speaks a different moral language. But broader society is beginning to speak a more secular language and the needle on abortion sentiment, in stark contrast to traditional/same-sex marriage, hasn’t moved an inch. A pessimist might see this and predict another 40 years of gridlock. But I’m optimistic because the persistence of pro-life sentiment in a more secular world means that pro-choice individuals are eventually going to have to confront abortion in their own moral language and it’s going to bring about some uncomfortable truths. Like the truth that the unborn are the actual victims of inequality. Like the truth that discrimination based on level of development has vast implications, since all of the human family begins the same way. Like the truth of the massive scale of abortion’s inequality: 50+ million lives irrevocably discriminated against and another hundreds of millions alive today who’s discrimination is echoed by the continued presence of the institution of abortion.

And like the truth that there can be no grace periods. If equality is to mean anything then it must begin when you do. Not “able to do calculus” you, or “capable of desiring to continue as a subject of experience and other mental states” you, or “white” you, or “straight” you, or “wanted” you. Just the you that begins as a speck barely visible to the naked eye and develops into a complex thinking moral being who eventually bears both the power and the responsibility to honor the equality of those who come after you. These are not easy pills to swallow, but equality demands high standards, the most important of which is to get it right from the start.

It’s not about who matters more
Scroll to top