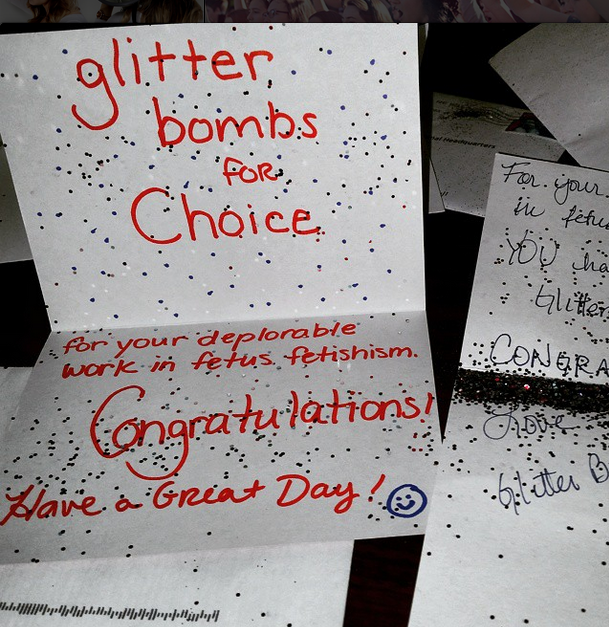 I try to be an open-minded person. I obviously have strong beliefs about the right to life, but I am willing to have conversations with people who support abortion or are on the fence. I agree with Josh Brahm of the Equal Rights Institute when he emphasizes the importance of reasoned dialogue among people who disagree.

But I also believe that some people are too far gone and that reasoned dialogue with such individuals can only lead to my banging my head against the wall. One sure sign of such a person is their use of the phrase “fetus fetish.”

Several pro-life organizations and politicians have recently received glitter bombs from abortion supporters (Students for Life of America’s is pictured),1 and almost all include a denunciation of “fetus fetishism.” The glitter bombers are not the first to use this bizarre slur, but they’ve drawn attention to it, so let me just state the obvious:

Pro-life advocates are not sexually attracted to unborn babies.
That suggestion is outrageous.

Do people who throw out the “fetus fetish” accusation actually believe it? Maybe; on occasion, an extreme abortion advocate will state that their motivation is primarily sexual (link NSFW), so perhaps that causes them to ascribe sexual motives to their opposition as well.

But they’re a minority. I would bet that most people don’t really believe that there’s such a thing as a fetus fetishist. They merely want to accuse pro-lifers of being narrowly obsessed with the unborn (also false), and think that using the word “fetish” makes them edgy and clever.

So they might be surprised to learn that their lowball tactic is actually centuries old.

White abolitionists, particularly women, were vilified by slavery supporters as “n****r-lovers.” And the epithet never really died out.2 When Viola Liuzzo, a young white woman who actively supported the civil rights movement in Selma, was murdered by Klansmen in 1965, “people … called her a white whore and a n****r lover, and said that she was having relations with black men.”

Nothing new under the sun.

1) Secular Pro-Life has not received one. We’d be offended at the exclusion, but due to the fact that all our volunteers help out from home, there is no central office to mail one to.


2) Don’t repeat my mistake of looking it up on Urban Dictionary. I did so in the course of researching this piece, and the number of entries is truly depressing.