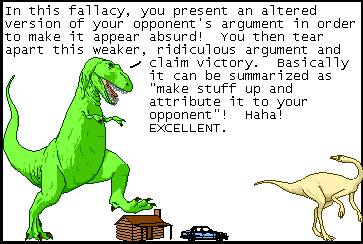 [Today’s guest post by Nate Sheets in the second of a series. The next post in the series will arrive sometime next week.]


One of the more commonly-known logical fallacies is the Straw Man Fallacy. This fallacy occurs when we set up an argument in a negative or exaggerated way, in order for us to easily take it down. (This should not be confused with the ad hominem logical fallacy, which we will cover next week.)


It makes sense that mostly everyone engages in Straw-Man-thinking, even if we know intellectually that such reasoning doesn’t stand up. Our brains evolved to sort what we encounter into categories for survival–these stereotypes often stick around and impact our thinking as we go throughout our lives. If we utilize Straw-Man-thinking innocently, I believe this is because of our stereotypes toward an opposing viewpoint. Of course, in the course of arguments, people tend to Straw Man intentionally or lazily, because they do not want to invest time investigating the reasoning of their opponents further.

How Straw Men Play Out


I sometimes experience Straw Men on my own opinion on abortion (on the rare occasions I bring it forth) from both sides of the debate. If I say “I’m against abortion”, pro-choicers may respond with, “Making abortion illegal will kill women through back-alley abortions!” That is a straw man because I said I was anti-abortion, not that I wanted to make abortion illegal.


Additionally, when we talk about making the pro-life movement secular-friendly, many pro-lifers defensively react with statements such as, “We have a right to our religion! Without the religious, the pro-life movement would be nothing!”  That is a straw man because SPL never said we should take away the rights of the religious, nor have we said we should remove religion from the abortion debate entirely.


So What Should We Do?
Again, it is much easier to disprove our opponent’s argument if we take it upon ourselves to frame it. If we took the time to take their arguments at face value, we might actually find that we agree on several points, and can work together to create some solutions that benefit all.


In the end, in order to maintain a fruitful and honest discussion, we should aspire to describe our opponents position in such a way where they would say, “Yes, that is what I believe.”