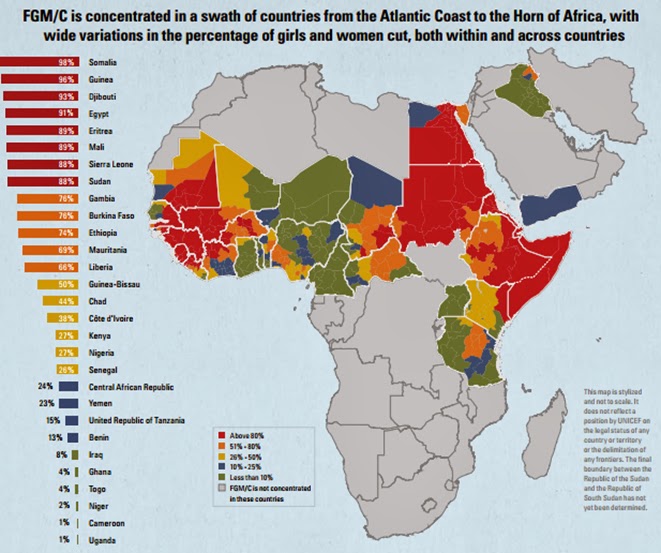 [Today’s guest post by Rachel Enders is part of our paid blogging program.]

We’ve all heard this phrase at one time or another regarding abortion. The debate in popular culture changes, however, when you apply this phrase to female genital cutting, also known as female genital mutilation, female circumcision, or FGM. Incredibly, healthcare professionals have tried to curb the prevalence and danger of this heinous deed by making it “safe, legal, and rare.”

Female genital mutilation is most prevalent in Africa and areas in the Middle East. To describe this as non-graphically as possible: the practice involves removal or other injury to external female genitalia, including the clitoris, labia minora, and labia majora. Other forms include narrowing the passageway to the vagina and ceremonial pricks. While some people argue that there are health benefits to male circumcision, it is irrefutable that health is not improved by FGM. The only result from this practice is pain and long-lasting harm. According to the World Health Organization, there are more than 140 million girls and women who have endured FGM, and the practice is becoming more common in western nations due to the influx of immigrants.

It is obvious that
female genital mutilation is a crime against humanity – especially considering that the girls and women affected usually have no say in the matter. Despite the heinous nature of the
procedure, in 2010, the American Academy of Pediatrics proposed that an altered
form of FGM – the ceremonial pinprick – should be legal and performed by a
licensed physician. That’s right. The “safe, legal, and rare” rhetoric of abortion was applied to female genital mutilation.

A bioethics
representative from the AAP said, “If we just told parents, ‘No, this is
wrong,’ our concern is they may take their daughters back to their home
countries, where the procedure may be more extensive cutting and may even be
done without anesthesia, with unsterilized knives or even glass.”

It is astonishing how closely this debate parallels the abortion debate. Proponents of legalized abortion claim
that the results of illegal abortions will be worse than legal and “safe” abortions, and so the moral question is shoved aside. Pro-life advocates
feel that the heinous nature of abortion outweighs the potential back-alley
tragedies that might occur following illegalization. In both cases, society-wide problems drive the crime. In both cases, the victims are often young. In both cases, the
practices come from a male-driven patriarchal society. Abortion and FGM are
both used to oppress girls and women, and both are human rights
violations.

If it is preposterous for female genital mutilation to be “safe, legal, and rare,” then why is the deliberate killing of a human person in abortion legal?

(Note: The AAP quickly
retracted their proposal after the massive outcry against FGM. The academy
asserts that they do not condone any form of female genital mutilation.)