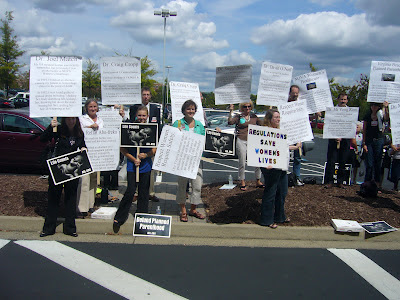 On Friday, the Virginia Board of Health approved new safety regulations for abortion centers in the Commonwealth.  I was among the supporters gathered outside as the 13-2 ruling was announced.  We stood holding signs with information about troubled abortionists and abortion centers in Virginia.
As a pro-abortion group streamed out of the building, one young man yelled at us: “I can’t wait for all you old men to die off!”  I had to chuckle at his less than spectacular grip on reality.
Five points to whomever can find all the old, about-to-die-off men in the photo!