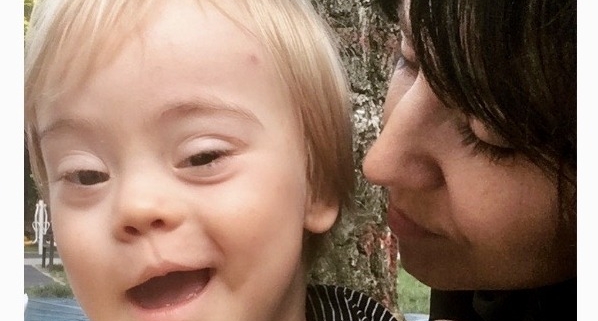 Today is World Down Syndrome Day! Did you know? A non-antagonizing piece of information. A picture of a cute kid with Down syndrome. A graphic with socks. Fuzzy inclusive feelings.

During my pregnancy with Toma, who happens to have Down syndrome, my husband and I were repeatedly harassed and generally scorned by the medical community. They tried to set us on the right track: screen, diagnose, abort. They made clear that as obstetricians, they were deeply aware of things, and, as mere parents, we were ignorant and irresponsible for wanting our child. Unpleasant encounters with the biased medical practitioners continued even after Toma’s birth, since we were in and out of hospitals during the early postnatal months. I cannot decide who ought to get the Awareness Award: the disgusted cardiologist who asked me what century I was living in while my half-naked newborn was recoiling from the cold ECG clamps? Or maybe the nurse looming over Toma’s crib, asking “Couldn’t that be taken care of with tests?” (Husband has his own candidates; we still debate the all-time winner.) To cope with all that belligerent “care,” I used to repeat to myself, almost as a mantra: people kill their unborn children for all kinds of reasons all the time. The hostility towards mine is nothing compared to that.

In addition to propelling me into disability advocacy, these experiences motivated me to become much more active for the pro-life cause.

During the 1960s and 1970s, the entitlement to abort a disabled child was one of the main arguments for the decriminalization of abortion. Pro-life and disability advocacy have been in an uneasy alliance ever since. So initially, as a pro-lifer roaming raw and naïve around the Down syndrome communities, I hit many walls many times. To my surprise, there were a lot of Down syndrome parents who had similar experiences to mine of dehumanization and pressure to abort from the medical community, but they were stuck in the “wouldn’t want to impose anything on anyone” mode. Opposing abortion means trouble, and its just easier to ignore the dots screaming to be connected.

When it comes to disability-selective abortion, abortion rates for neural tube conditions such as spina bifida are almost as high as rates for Down syndrome. Still the pro-life community gives Down syndrome the most visibility, and with good reason. In a way, Down syndrome launched the idea of prenatal testing. The post-WW2 era of new and improved eugenics started with Jerome Lejeune’s discovery of the genetic basis for Down syndrome. Lejeune expected that his discovery would be used to target babies with Down syndrome. He was right: people soon figured out how to check fetal chromosomes, and the age of prenatal testing ensued. Lejeune spent the rest of his days defending the right to life and dignity of people with Down syndrome. Nonetheless, prenatal surveillance for the purposes of eliminating disabled babies has continued to widen in scope ever since. Down syndrome still has the highest termination rates among prenatally detectable conditions.

Coming from both disability and pro-life communities, I can freely turn my coping mantra into a cold take: aborting a baby because of Down syndrome is no more or less immoral than aborting a baby for any other reason. In fact, in a way making disability-selective abortion about only discrimination segregates the issue. The “eugenic” part of eugenic abortion has to do with discrimination, yes, but the “abortion” part is a problem in itself.

Still eugenic abortion does imply a few specificities that should be taken into account. As we’ll see,  they make the key issues with abortion shine more clearly in all their gore.

Eugenic abortion is not about the circumstances; it’s about the baby.

When I share that I was pressured to abort because of Down syndrome, the standard response from the pro-choice crowd is “That is not what pro-choice means. Your choice should have been respected.” But they are missing a crucial point: the pressure from the medical community was not about me. My husband and I were pressured simply because we were an annoying obstacle between our baby and those who’d prefer him dead.

With abortion, the baby is always the target. But that reality can become obscured when abortion advocates saturate the narrative with women’s circumstances, preferences, and feelings. With eugenic abortion, the targeting of the baby is crystal clear. The disabled baby is the explicit, concrete target: of the system – consistently, of the parents – commonly.

Eugenic abortion is an intersection between the systemic, the cultural, and the individual.

Through the end of WW2, eugenics and forced euthanasia atrocities were state-led. Today, genocidal lethality is dispersed into a myriad of private decisions. This time around, it’s hard to decide on the ultimate source: the culture, the law, the state’s health policies, the aborting parents, or all of these?

In 2012, the group Saving Down Syndrome led the legendary legal action at the International Criminal Court against the government of New Zealand. They sued for genocide of people with Down syndrome because of the wide-scale governmental implementation of prenatal testing. It turned out the case was a bit too sophisticated for the ICC to grasp – but this action inspired many in our fight against liberal eugenics.

As for the pro-choice side, there are currently more than a dozen cases against Poland at the European Court of Human Rights. Poland has recently banned eugenic abortion. Pro-abortion organizations gathered mothers and encouraged them to sue on the grounds of torture–for not being allowed to abort their children with disabilities. Imagine being those children.

The majority of abortion laws in Europe allow abortion up to a certain limit but allow it up-to-birth in cases of disability. In the UK, Heidi Crowter has just been given permission to appeal the previous High Court decision to dismiss her case for repealing the Abortion Act section 1(1)d that explicitly allows abortion up to birth on the grounds of disability (while protecting non-disabled babies beginning at 24 weeks gestation). This legal disparity is exactly why even pro-choice people back up Heidi’s case: Heidi is not demanding anything special, she is just pleading for babies with Down syndrome to be equally protected — is that a violation of women’s rights?

Prenatally, there is a systemic search and destroy mission deployed against babies with Down syndrome. Postnatally, there’s an amped up positivity, but the kindness often comes with hidden shards of glass. “You are a hero. I would not be able to!” means they’d readily abort, because it must be “so hard.” But actually there’s nothing heroic in loving and caring for your child – it’s what parents are for. What makes this hard is living with the ableism. Society actively wanted us to abort our son because he has Down syndrome, but now that he’s born, hey, there’s inclusion!

The same society which strongly prefers abortion for a child like mine–including not only those who have aborted, but also those who would have had they only known–is now going out of its way to inform me that they are willing to include my child. What could possibly go wrong?

Wherever there’s a stigma or hierarchy around a certain quality–be it sex, intelligence, any kind of disability, race, or poverty – abortion will be used to eliminate those positioned below. Even when it does not serve some social hierarchy, abortion weaponizes the biological hierarchy between mother and child to the point of child’s death. And it has always implied a tangle of law, culture, health policies, and individual morality.

Most prenatal diagnoses of disability happen halfway through pregnancy or later. People don’t carry a pregnancy all the way to a diagnosis when the pregnancy is unwanted. Abortion after the baby’s diagnosis boils down to choosing between children: “I want a child, but not that child.”

Disability-selective abortion adds an asterisk to the phrase “every child a wanted child” leading to a footnote that says: as long as they’re not disabled.

Obscene termination rates for Down syndrome and other conditions lay bare the fact that society generally doesn’t want people with those conditions, and wants all the rest of humanity only conditionally.

But then isn’t that the case with abortion in general? The shift that suddenly turns a wanted baby into a victim of lethal disdain makes it perfectly clear how flimsy and insubstantial the mother’s connection with an existing baby becomes when abortion is available. Abortion corrodes our fundamental relations and dissolves the value of every person’s life, making it tentative instead of inherent.

Eugenic abortion is about the sameness of those in utero and those outside of it.

I often wonder about pro-choice–and especially pro-disability-selection–Down syndrome parents. What do they tell their kids when they see Heidi or others with Down syndrome fighting for prenatal justice? Do they keep their kids in the dark? How much gaslighting must be going on there?

Because, in order for someone with Down syndrome to be at peace with abortion on the grounds of their traits, they have to accept their condition as something so bad that it warrants being wiped out in utero. The same goes for any disability detectable during pregnancy.

Congenital disability does not float in amniotic fluid like an apparition: someone is there having it. When a person with Down syndrome speaks against aborting babies like them, the connection between those in utero and those outside becomes acutely palpable. This is why the issue of disability-selective abortion is so potent and dangerous to the entire pro-abortion narrative: it reveals the fact that abortion is done on humans like us.

[Read from other parents of children with disabilities defending their children’s value and lives.]

ACOG has spoken: 13 phrases we no longer are supposed to use regarding abor...

Why does prenatal testing exist? Perspectives from a parent of a child with... Scroll to top