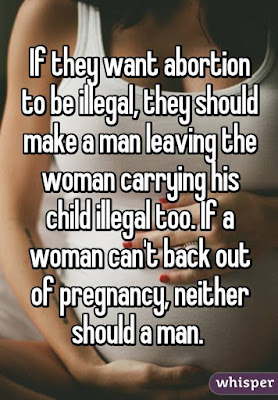 I’d like to take a moment to respond to a meme that I have seen floating around Facebook:

Essentially, this meme is stating that if women can’t back out of pregnancy, then men shouldn’t be able to, either. This is one of those arguments that pro-choice people should be able to immediately recognize as a bad argument, but it still gets traction anyway.

The reality is that already, men can’t “back out” of pregnancy. Child support laws apply to men as well as women. A father who does not want to stick around is legally required to provide financially for his child. In most cases, courts review such matters using the standard of “the best interests of the child.” The law recognizes that the needs and rights of the child outweigh the desires of the parents. There have even been cases in which a man whose sperm was stolen and used to conceive a child, who clearly did not intend to be a father, was still legally required to pay child support.

This meme wants to paint pro-life people as inconsistent, but any pro-life advocate worth his/her weight in gold-pressed latinum would agree that men should not able to back out of pregnancy, any more than women should be able to.

Perhaps they mean that a man shouldn’t even be able to leave the relationship, since the woman can’t leave. However, this ignores two key issues. First, if the woman “backs out” of pregnancy through abortion, she kills her child. Second, if the woman waits nine months, she can terminate the relationship, but not the life of her child, through adoption. By not aborting, she is not required to raise the child herself.

Setting aside the law concerning financial support, I do believe that a man is doing something morally wrong if he impregnates a woman and leaves her. He should take responsibility for his actions, to say nothing of the fact that a sizable number of women likely would not abort if they have the support of their partners.

Despite the motivations of whoever created this meme, it actually underscores the inconsistency of legalized abortion: a woman can back out of her pregnancy, but a man can’t. A woman can have her child killed, but if she decides to raise the child, the man is on the hook for 18 years of child support with no option of backing out.

This meme attempts to paint pro-life people in an inconsistent light, but I don’t know of any pro-life advocates who would say that a man should not take responsibility for the child that he creates. But since the situation we have now is that a man can’t back out of a pregnancy because the child’s needs and rights must be respected, maybe we should think twice about whether the child’s needs should prevail when a woman wants to back out too.