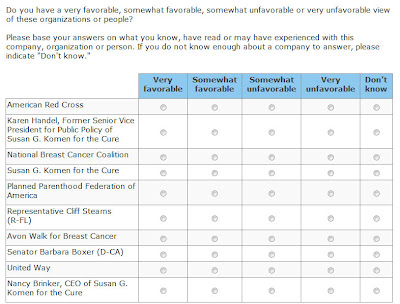 Susan G. Komen for the Cure recently emailed me a link to a survey, which reveals some interesting clues to Komen’s thought process.  The survey is only available to those who received an email, but I took plenty of screenshots.  The questions indicate that, while Planned Parenthood rejoices that they’ve won the battle, Susan G. Komen is still weighing its options.

For starters, Komen is finally doing what it should have done long ago: measuring support for Planned Parenthood. 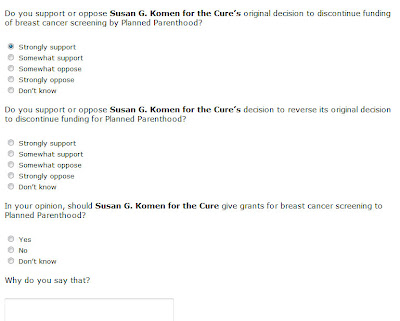 Option #1: Pretend that the real issue is that Susan G. Komen has been unscientific.

Option #4: Try to rise above the fray by focusing on the “true victims”– women who will be harmed by the reduction in donations to Komen.

Unfortunately, “Clarify that Planned Parenthood remains ineligible for grants” was not an option.  Given Planned Parenthood’s mafia-style tactics, I can hardly blame Komen for that.  But the truth is that until they sever their ties with the nation’s largest abortion chain, they will never be able to fully focus on their mission.
This survey shows that Komen is still listening.  We must reach out and let them know that we will be there for them if and when they finally get the courage to break free.